The Wealthiest One Percent Get Even More Ridiculous! 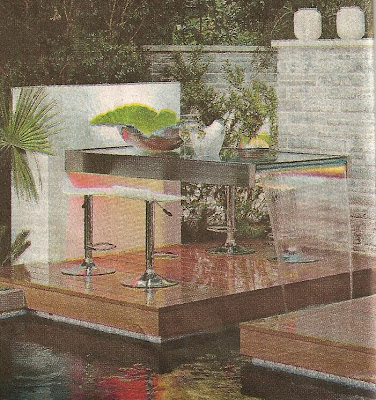 One of the newest toys for the wealthy: A designer dining table with built-in waterfall for only $50 grand!


The wealthiest 1 percent grow more ridiculous by the second! As time goes on ever more evidence grows that they have so much money they simply don't know what the hell to do with it (but one thing you can be sure they won't do is pay their fair share in taxes!). The latest evidence of excess wealth concerns the latest toys, appliances and goodies with which the richest now ply themselves and that they regard as necessities.

Case in point: the dining table equipped with its own built-in waterfall (see attached image). The rich guy whose home currently featured this gizmo noted that he got bored just dining poolside so decided to purchase this special "waterfall table" for a cool 50 grand. As he put it: "No biggie, really. It was barely one tenth of what I get back from the Bush tax cuts each year!"

Of course, no truly rich fucker - especially if he has dogs- can afford to be without his own "Forever Canine Lawn" featuring a high-end astroturf surface that has a flow through backing which drains effluent from doggies plus - get this, anti-microbial blades chemically treated to quickly (within ten seconds, break down pet waste and whisk it away. Out of sight, out of mind, and no poop scoops for the rich to have to dirty their dainty little hands. Plus....no more urine burns for their special chemically -treated lawns. (Oh, don't worry about them getting cancers from the chemicals like ordinary mortals, they all have Cadillac health insurance plans).

Oh....oh....wait! Am I waging "class warfare"? Tough shit! In this country one must wage it wherever and however he can to re-instill a sense of class consciousness to replace the false consciousness that has inundated so many!

But let's carry on.

Obviously, if Mr. or Mrs. One Percent has such fancy dancy stuff to take care of dog doo, you can be sure they have even fancier gadgets, errr.....toilets...to take care of their own business. So no surprise that the 150 grand all-purpose commode is a current fave among the jet set and other one percenters that take off each weekend for St. Kitts or St. Martens for a lobster thermidor feast, or 18 holes.

The special commode apparatus is designed to accommodate any 1,200 sq. foot "Master Bathroom" and includes a "wall-mounted LED pad that looks like an i-phone" (Denver Post,Feb. 18, p. 8D) and which "auto-magically raises and lowers the toilet seat or lid" without having to actually touch it. Just imagine, folks, fellow 99 percenters, how many gazillions of nasty microbes the wealthiest can now avoid thanks to this 'must have' commode!

Once the rich mount the seat they then have the option of using a remote to automatically heat the seat, lest their heinies gather wrinkles from the too cold surface. We can't have them freezing their little butts off, after all. In addition, the remote allows music - classical or jazz- take your pick, to be played as the seat is warmed and presumably while the wealthiest churn out their wealthy "products" from all that foie gras, lobsters, calimari, shrimp cocktails, and whatnot they've consumed.

No doubt while they are cogitating on the poor 99 percenters who don't even have jobs...or in many cases homes...

After conducting their business, the rich need not mess with toilet paper since the special commode - at one touch of the remote - "sprays and dries" and even features "adjustable flushing".

Now, the PR circulating is that these are merely "showcase homes" and the doodads featured are not meant to be taken seriously. In other words, we aren't to actually literally believe that anyone actually possesses them. Don't believe this for a nanosecond! If they exist, and are now in showcase homes, some one - of the one percent persuasion, already had them and merely lent out a few appliances for display purposes, or gave an older version away.

All of which entices us, the 99 percent, to return to the issue of "excess wealth". While Karl Marx never really specifically addressed it, a whole group of Caribbean Socialists based at the Univ. of the West Indies did in the late 1970s. Their main theme was that any capital used for "frivolous" purposes could be regarded as excess, and they generally set a criterion that in a nation such as the U.S. - anything over $10 million had to be excess wealth. Making allowances for where one lived, if one had money left over to burn ...say on $150 grand commodes, one was awash in excess wealth.

Religions commonly retain the notion of "tithing" or giving away at least ten percent of earnings, including capital gains. But the Caribbean socialists of the 1970s, including Dr. Ralph Gonsalves, maintained that 50% ought to not be too much to part with for a hyper rich capitalist. For the top one percent in the U.S. one may argue that anything over what those Bush tax cuts provide is definitely excess wealth....and hence,...if they don't voluntarily give that money back in some way, say to homeless charities, then Uncle Sam needs to help them out.

Towards that objective, let us hope the Bush tax cuts finally meet their justified end by December of this year!
Posted by Copernicus at 12:02 PM