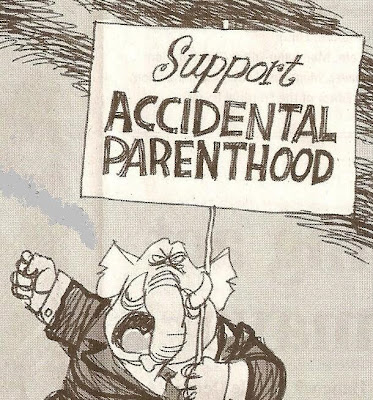 Peggy Noonan (Declarations, 'Obama Above the Fray for Now', WSJ, p. A13 today) is incensed because American women are starting to catch on to Rick Santorum and the fact the GOP is waging war against them. While other conservo columnists (i.e. Kathleen Parker) have correctly pointed out that the GOP "lost it" by proposing a Virginia law that amounted to rape (an intra-vaginal ultra sound) Noonan doesn't get it at all. But what's new? Noonan has always had her pet GOP-advancing agenda, never mind how many millions of women will be irreparably hurt by it!

According to Noonan in her column, poor Rick Santorum is "trapped in a web laid by the administration's claim that the furor over the Obamacare mandate isn't about religious freedom and abortion drugs it's about crazy people trying to take away your contraceptives"

Well, duh! But in fact, Noonan cartoons the problem as is her modus operandi. The issue isn't that government officials will actually come in and seize contraceptives as if in some drug bust (though to hear and see Santorum's past statements that's still feasible) but that all contraceptive drugs...the pills. ..will simply be allowed to rise to astronomical price levels, via drug "tiers". It's done all the time, and one reason so many in Medicare's Part D prescription drug program, for example, end up in the 'donut hole". Case in point, my aciphex which has just been put up to tier one and now costs $460 for 90- pills, when three years ago they cost $50 for 30 pills. Do the math! That's $1.66 a pill to $5.11.

Now, consider that the Reeps needn't physically barge in and "take away" a woman's pills, merely make them so damned expensive (via negotiating with drug companies to put them in higher cost tiers) that they become unaffordable. Or worse, a liability - say if a woman believes she can only take them every other day. As for condoms and diaphragms, no surprise that some reeps once joked about lowering QA manufacturing standards to make it more probable that "the damned things will tear when least expected".

Then what? Well, one arrives at the GOOPer's fondest wish: accidental parenthood! Never mind they don't want to pay for child care or medical care after the kid is born! (That would require taxes!)

Thus, Noonan's next claim that:

"This is as big a lie as you can tell in politics, and a deeply mischievous one"

is simply bollocks. It definitely isn't a lie because Noonan doesn't want to believe it, or hear it, nor does it "only muddy the waters and adds a new layer of meaningless alarm"

Because make no mistake, American women have every right to be alarmed! The Virginia fiasco law of mandating a putative medical device to rape them in order to be allowed to have an abortion in that state, ought to have sounded five alarm bells. If it didn't, then American women are comatose - and that refers specifically to the younger ones in the 18-22 age category, who made a large difference in the 2008 elections and need to turn out again. Even if that means standing for hours in a state motor vehicle office to get a proper photo ID card.

American women simply cannot allow themselves to be lulled into false complacency by the likes of Peggy Noonan, then wake up when it's too late to discover Rick Santorum or Mitch Romney or Newtie Gingrich (via Executive order) has taken away all their physical and sexual autonomy - rendering them Gooper chattel. Or to put it another way: "Always subject to being barefoot and pregnant".

How far can these despicable cretins go? How far can they and an accessory church that used to help Nazis escape to South America go in attacking the women of this nation? I recall a conversation with German friends, former Wehrmacht soldiers, in May of 1985 who recounted horrific tales of what Hitler did under his "Reich laws". One of the first things was to make birth control a felonious crime in the Nazi dictatorship. The reason? To use any form of birth control was to defy the need for the Aryan state to provide members of the Master Race, and also to provide new soldiers for the Wehrmacht. Those women caught practicing it for any reason....were dispatched to the camps: Chelmno, Treblinka, Buchenwald. Often placed under the supervision of brutal female S.S. guards until they either perished of disease, torture, malnutrition, or in the gas chambers.

Now, I am not saying any Goop that gets in will go that far. However, if his party grabs all branches of the government it's not beyond the realm of possibility to believe any of them will be seriously emboldened to exercise even more extreme actions than rhetoric hitherto. What I am saying is we already know this party features extremists who've made their hatred and distrust of women abundantly clear. They couch and conceal that hatred in the language of "religious liberty" and freedom, but the subtext is pure hate ....no different from what the Catholic Inquisitors met out to hundreds of thousands of women ...ripped and shredded over their torture racks and open pits.

My question then is, why give them ANY chance to wreak havoc on any woman, of any age? Why even remotely entertain the possibility of a new "Inquistion" directed at inflicting pain, shame and humiliation on those who are already up against it?
Posted by Copernicus at 1:42 PM