The Cancer Industrial Complex: The Biggest Conflict of Interest in Medical History 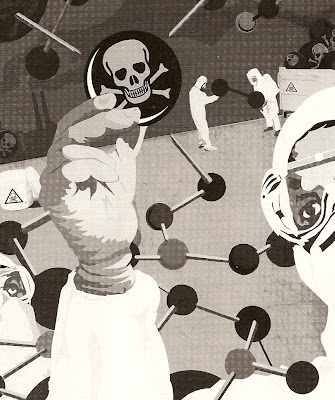 While Devra Davis in her 'Secret History of the War on Cancer' correctly exposed the PR underbelly of the American "Cancer wars" and their beneficiaries (see. e.g. Chapters 1-4), while also naming the American Cancer Society as having conflicts of interest and mixed motives (Chapter 5, 'Fear Sells) she doesn't go anywhere near as far as author Lauretta Schwarz-Nobel ('The Breast Cancer Industry' in Poisoned Nation, St. Martin's Press, 2007).

While Davis accurately notes that people get told over and over (by the likes of the ACS and their physician enablers, apologists) that "too much fat" is causing their cancers - whether of lungs, bladders, prostate gland or breasts - and hence they bear greatest responsibility. ( Never mind the evidence from more than 80 years of cumulative data which discloses it's chemicals in the environment that contribute more than fifty times as much), Schwarz -Nobel pulls no similar punches.

She not only names environmental toxins and the chemical industry as the biggest culprits in the cancer explosion (she notes breast cancers have increased 300% since the 1960s) but shows in her (named) Chapter 6 that one of the biggest cancer drug producers (Astra Zeneca) ALSO produces one of the most toxic herbicides around, acetochlor. See also my earlier blog on Toxic America: http://brane-space.blogspot.com/2011/10/america-toxic-1.html

Schwarz -Nobel asks, as every thinking American ought to, how it is that a multinational that manufactures one of the worst known carcinogens (p. 107) can also be manufacturing cancer treatment drugs. How can you basically be causing cancers and treating them at the same time? (And Devra Davis as well as Schwarz -Nobel both show that the usual mealy-mouthed crap trotted out by these companies, "there's not enough evidence to support the claim etc." of their herbicides causing cancers is warmed over bollocks.

"According to Sierra Magazine, 'Its Perry, Ohio chemical plant is the third largest source of potential cancer-causing pollution in the United States releasing 53,000 pounds of recognized carcinogens into the air in 1996". AstraZeneca is also the world's third largest drug concern, valued at $67 billion."

She then goes on to quote a Dr. Samuel Epstein from the same Sierra piece (ibid.):

"This is a conflict of interest unparalleled in the history of American medicine."

Is is just me and Schwarz -Nobel or does anyone else see anything fundamentally ethically wrong with that? But it gets better, and here is where Schwarz -Nobel drags in the ACS for reprimand. According to an article by the same Dr. Epstein, appearing in Tikkun magazine ('The High Stakes of Cancer Prevention', Nov. -Dec. 2000),

"Since 1982, the American Cancer Society has insisted on 'unequivocal' proof that a substance causes cancer in humans before taking a position on limiting it. They are largely indifferent to cancer prevention."

Which, of course, must include all those toxins included in the known 85,000 chemicals that are known to be manufactured in this country each year. So why lay the blame on a person's genetics or foods? Well, because this is an extension of the public relations industry's ruse to entice people to accept the "fundamental attribution error" and lay blame for poor health on themselves as opposed to the monstrous chemical-industrial complex that helps fund the likes of the ACS and their clones. (Which is why I don't donate a single stinking dime to them!)

"After analyzing the American Cancer Society's budget and programs in 1998, the Chronicle of Philanthropy, a watchdog orgnization that monitors major charities, concluded that the agency was 'more interested in accumulating wealth than saving lives".

She goes on to note that "though genetics and early diagnosis are stressed by the cancer industry, the truth is that '85 to 90 percent of breast cancers cannot be explained by inherited genetic disposition". (The Breast Cancer Epidemic 2005, at Breast Cancer fund: http://www.breastcancer.org/

What is the "cancer industry"? According to Breast Cancer Action, quoted by Schwarz -Nobel (ibid.):

"The Cancer industry consists of corporations, organizations, and agencies that diminish or mask the extent of the cancer problem, fail to protect our health or divert attention away from finding the causes of breast cancer...this includes drug companies that, in addition to profiting from cancer treatment drugs, also produce toxic chemicals that may be contributing to the high rates of cancer in this country and increasing rates throughout the world. It also includes the polluting industries that continue to release substances we know or suspect are dangerous to our health, and the public relations firms and public agencies who protect these polluters.

The Cancer industry includes organizations like the ACS that downplay the risk of cancer from pesticides and other environmental factors and which have historically refused to take a stand on environmental regulation".


That's quite a lot to digest for sure, but all plausible and all dovetailing with my earlier blog (see link above) on how we're being overwhelmed by toxic crap in this country, all known carcinogens, in everything from PFOA(perflurorooctanoic acid ) -based chemicals and additives, that causes monstrous birth or sexual defects in young kids to phthalates (pronounced THAL-ates), bisphenol A (now banned in Canada and most of Europe - nations that actually care about their citizens) to atrazine and acetochlor in herbicides (for a rogue list of all of the most dastardly chemicals poisoning us, See: 'The Body Toxic', by Nina Baker, 2008)

For sure, every woman concerned about her health issues, her risks of cancers from these poisons around us, needs to get a hold of all three books: Baker's, Schwarz-Nobel's Poisoned Nation and Devra Davis' 'Secret History of the War on Cancer'. All three in tandem will disclose how we've all been gamed (Again!) by the multinational profiteers and their apologists, whitewashers to believe WE have brought on our own issues, and not the vermin that make the cancer-causing agents.

Just as authors John Stauber and Sheldon Rampton exposed the verminous underbelly of the PR industry in their 'Toxic Sludge is Good for You', e.g.

Baker, Schwarz-Nobel and Devra Davis have performed a public service in showing how the 'toxic sludge makers' have joined hands with the cancer industry to try to hustle us both ways - giving us cancers with their sludge, and then treating them with a variegated sludge -all the while their benefactors rake in the dough and laugh!
Posted by Copernicus at 10:17 AM