One of the weaponized bed bugs soon to be tested on volunteers. 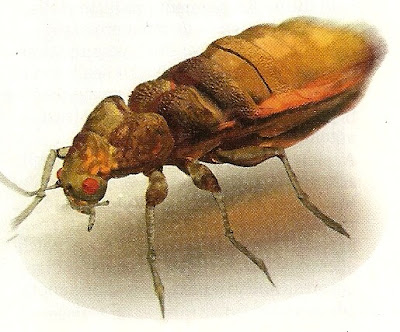 After twelve years of far reaching, intensive efforts, the first weaponized bed bugs are now being readied for their first serious tests against as yet undeclared targets. It is conjectured these will be isolated islands in the Pacific Archipelago onto which some 50 volunteers will be brought, most of them from Ft. Leavenworth - as an alternative to completing their sentences. The bugs are expected to be released by unmanned drone.

According to Col. Tom A. Fulery, head of the Ft. Carson Bio-Weapon Bug Division at Ft. Carson outside Colorado Springs, the weaponized bed bugs are different from the normal variety (which has become such a pestilence in many states) in the following ways:

- The consume at one meal about 40 times more blood, on average and hence swell to about twenty times the size of the normal engorged bug

- Unlike most normal bed bugs, these beasties are felt when they put their little proboscis into you - according to one test scientist: "It felt like being injected with battery acid!"

- Their chitin outer shells have been genetically re-designed by adding a polymer to the chitin molecule, Their outer cellulose is now as if "reinforced by titanium" according to one observer.

- Their reproductive rate is 45 times that of the regular, non-weaponized bugs.

Col. Fulery estimates that within one day of the bug drop on the selected islands, the volunteers' temporary shack quarters will be overrun by tens of millions of the bedbugs feeding on them non-stop. This is another aspect, unlike most of the regular bedbugs (which are nocturnal) these weaponized critters feed night and day.

Asked if the volunteers will have any protections at all for their stay - which Fulery estimated at one month, maybe more, he replied:

"We're not totally heartless! We will equip these volunteers with DEET, and also with several cans of Raid and a few smoke bombs to help them out. There will also be a nearby storage facility loaded with napalm, but we are advising them to only use that as a last resort because if they deploy it on their infested quarters they'll have no place to live. Also, these weaponized bugs can survive temperatures up to 1,200 Celsius!"


Col. Fulery was then questioned on the possible risk of the weaponized bed bugs escaping and say, arriving at the U.S. mainland, or even htiching a ride on one of the volunteers (even in the egg form, since they can lay 10,000 eggs a day).

"This is not a huge concern. If the worst comes to the worst we have ways and means of controlling the weaponized bed bug outbreak and the worst effects."

Asked about the peculiar red eyes of the weaponized bed bugs, Col. Fulery merely shrugged his shoulders and quipped:

"What can I say? They have infrared eyes too! They will immediately be drawn to any sources of heat including bodies. But........we have found that they also seem to congregate very unusually around any fast food so we are telling the volunteers they can have Mickey D burgers or the Colonel's chicken only shipped in at their own risk! We recommend the volunteers stick to the islands' vast stock of available coconuts!"
Posted by Copernicus at 10:39 AM