WHERE were Miami's Cubans When A Terrorist Was Being Harbored There? 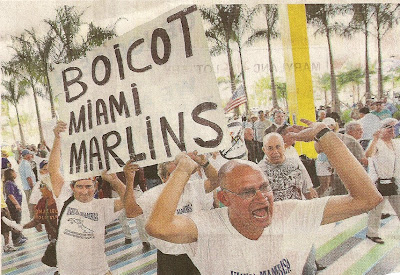 Top: Miami's Cubans go ape-shit over remarks Miami Marlins manager Ozzie Guillen made about Castro in TIME magazine. Bottom: The arch-terrorist Luis Posada, harbored in Miami for a number of years. No nasty words or accusations hurled against him!

The problem about being righteous, especially too self-righteous, is that if caught out being selective your righteousness loses its edge and you become one more in a line of hypocrites. Such has been the case with most of Miami's half million Cubans, who are again in an uproar - this time concerning remarks made by Miami Marlins' coach Ozzie Guillen to Time magazine. In that magazine, in an interview, Guillen made the mistake of referring to Fidel Castro in respectful terms thereby earning the rousing fury of Miami's Cubans.

On all the area's Spanish -speaking radio stations, egged on by hosts, Cubans called in to express their ire and outrage on Ozzie, demanding he be fired. Well, the Marlins - clearly wanting to fill the stands of their new stadium in the old Orange Bowl - heeded the calls and at least benched Ozzie for five days. So much for exercising one's First Amendment rights, but at least someone got it right on the Marlins' Facebook page when they wrote:

"Any Cuban who condemns Ozzie Guillen for speaking his mind is just as guilty as Fidel Castro was for killing people who spoke their mind".

Of course, the Cubans would respond that they aren't "killing Ozzie", they just want him fired (though as a new article on http://www.salon.com/ observes, in the old days he'd likely have been offed in a car bomb or at least had his legs busted up. The Miami Cubans don't take kindly to anyone even remotely praising Fidel Castro or criticizing their political leanings - extreme rightist all the way!)

My question is simpler: Where were all these miffed and outraged Cubans when one of the primary terrorists of the Western hemisphere was evidently living amongst them - within earshot of 'Calle Ocho' barely 5 years ago? Actually being harbored there. I am writing, of course, of the CIA-sponsored murderer Luis Carriles Posada, who with Orlando Bosch and Freddy Lugo orchestrated the bombing of a Cubana Airlines Plane (Flight 455) off the coast of Barbados.

The facts were well known, despite the U.S. gov't dragging its ass on doing any prosecutions and only recently punting by trying to prosecute Posada on perjury charges (the case was lost in Texas, in April, 2011 ) . Never mind - we all understand how much clout Florida carries in the general election with its 27 electoral votes, and we knew at least some efforts were made to placate Miami's Cubans. (Why, I have no idea because on The Miami Herald forums to do with Guillen's sanction most refer to Obama as "the Obamunist". Getting the Evangelicals to try and save "Satan" would be easier than getting Miami's Cubans to vote for Obama in November. )

According to a secret CIA cable dated Oct. 14, 1976, intelligence sources in Venezuela relayed information about the Cubana Airlines bombing that tied in Bosch, who had been visiting Venezuela, and Posada, who then served as a senior officer in Venezuela’s intelligence agency, DISIP. On his arrival, Bosch was met by a CIA operative and Posada, according to the report. Later, a fundraising dinner was held in Bosch’s honor. “A few days following the fund-raising dinner, Posada was overheard to say that, ‘we are going to hit a Cuban airplane,’ and that ‘Orlando has the details,’” the CIA report said.

Meanwhile, those of us living in Barbados at the time had no remote notion of the bloody act to come, nor of the U.S. complicity in it, or that the same Cuban renegades whose associates conspired in the JFK hit were part of it. The CIA Report went on to read:

(Note in the preceding the sanitizing of the language, the use of "crash" instead of bombing, or what we call "collateral language.)

Meanwhile, Venezuelan police began rounding up suspects. Two Cuban exiles, Hernan Ricardo and Freddy Lugo, who got off the Cubana plane (Flight 455) in Barbados, confessed that they had planted the bomb and they named Bosch and Posada as the architects of the attack. A search of Posada’s apartment in Venezuela turned up bomb-making instructions, some materials as well as Cubana Airlines timetables and other incriminating documents.

That this vile killer of 73 innocents (the entire Cuban fencing team) isn't once mentioned by Miami's Cubans to any degree of opprobrium (and as I had blogged before, my nieces and I were at Paradise Beach, Barbados when the bloody body parts washed ashore) shows they have a hyper-selective sense of justice. Or maybe no sense. They howl and screech at a single interview remark by a baseball coach, demanding his head, yet not one word against Luis Posada who with the terrorist Orlando Bosch remains one of their heroes.

In this case we can say these anti-Ozzie protests are therefore a lot of sound and fury signifying nothing,.....as in nada! The Marlins, meanwhile, ought to be ashamed for their high-handed actions to cave into these fanatics .....and Ozzie should not give one more word of apology!
Posted by Copernicus at 9:34 AM