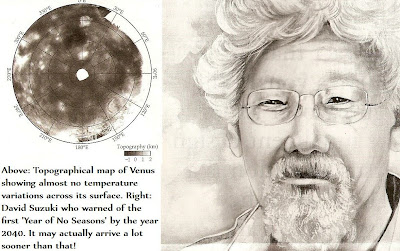 As the data are now in, and the month of March has broken all heat records since they started being kept, we are fairly certain the debate on global warming is now at a full stop. Or should be. As The Denver Post lead article noted yesterday, this is no longer an issue for debate among insurers, re-insurers, health clinicians and military strategists as they've all toted up the collateral losses while seeing one island president (of the tiny Maldives) deposed ....with much of it attributed to climate change-global warming. As we know or ought to, the Maldives is one of the tiny "canaries in the coal mine" bidding somnolent humans to wake up for once.

But what if humans don't? What if we keep on pissing away our stewardship of the planet with a devil may care attitude fueled by hubris and exceptionalism? What if we keep on populating the planet like rabbits despite the fact food stores and water are plummeting on account of climate-change fueled droughts? What does the future look like? What might the planet look like, say via an alien ship's radar scan made in the year 2200?

In 2006, the European Space Agency's Venus Express visited the planet Venus and used measurements of thermal radiation emitted from the surface to compile a topographic map (shown). On account of the planet's atmosphere being so thick with greenhouse gases (mainly CO2) it was found that temperature fluctuations in the lower regions were minimal (temperature can also serve as an indicator of altitude since more fluctuations will be found where the greenhouse gas density is less dense).

What this means then, is that on the Venusian surface there is essentially no variation in temperature with everything at an equilibrium value of about 800F. (450 C) This is exactly what one would expect to find at the extreme other end of a runaway Greenhouse scenario (which Carl Sagan first proposed in his Ph.D. thesis to account for Venus' exceptionally high temperatures.)

In effect, we have a planet settled into a state of maximum entropy.

According to statistical mechanics, the entropy (σ ) is defined according to:

where g denotes the number of accessible states. As that number g increases, so does log g and hence the entropy. When g is maximized for a given system one will say it is in an equilibrium condition and has no further states which can be accessed. Such is the case with a planet that is uniformly at 450 C across its surface ....no climate to speak of, no 'cool nights', no variation in temperatures of any significance.

Over this past winter we have basically seen the emergence of an unsettling "equilibrium" in the temperatures with no normally cold winter variations of any duration. Can this lead to a trend ultimately culminating in total absence of winter (or indeed any seasonal variations) across the world, possibly excepting the poles?

Researcher and author David Suzuki, in his book It's A Matter of Survival (Harvard University Press, 1991) co-authored with Anita Gordon, believes we are well on our way there and will reach that stage by the year 2040. The first 'Year of No Seasons' (I happen to believe we will reach this stage a lot sooner, perhaps by 2020.) Bear in mind Suzuki based his projections on 1991 data and the hope we'd be able to keep the warming increment to less than 2C by 2100. According to data compiled from the National Climate Data Center, IPCC, the Hadley UK Center and other sources, all bets are off for achieving this based on their recent reports.

Suzuki and Gordon waste no time bitch-slapping the complacent reader from the first words of Chapter One: Beyond Your Worst Nightmare:

"Venus II" will be our certain destination and topographic maps such as that shown will be about what any passing aliens find, perhaps by 2200. No oceans - they would have long since evaporated, and no biological life of any kind, except perhaps some undersea anemones near the poles. And no sign of the species that once dominated all facets but was unable to temper its own greed and selfishness.

Of course, the world will become unbearable long before that. The full horrors incepted, of which the loss of seasons is merely the most distinguishing, will include lack of sufficient water, lack of food - because of the inhospitable conditions to grow crops, and other hostile factors (catastrophic storms with hundreds of F5 tornadoes a year, monster hurricanes, rising sea levels inundating 30% of coastal lands in the U.S. alone).

And thus, what Suzuki and Gordon's 'Year of no Seasons' is telling us, is that the first step toward planetary eqiulibriaton of temperatures is under way, and ultimate biospheric death. It will take some more time, maybe a century and a half, but eventually all surface temperatures will arrive at the same high value, perhaps 200-220F or more. And this won't even be the end of it, since more accessible states will still be available before everything comes to an entropic standstill.

A dead planet, a once glorious world but now moribund. Wrecked by a greedy species that cared more about its artificial investment indexes, net worth and stock portfolios ( as well as easy or cheap energy for the mechanical devices that caused the problem in the first place) than the planet it once called home. Perhaps this is the fate we deserve.
Posted by Copernicus at 10:08 AM