The North Koreans Embarrass Themselves Again 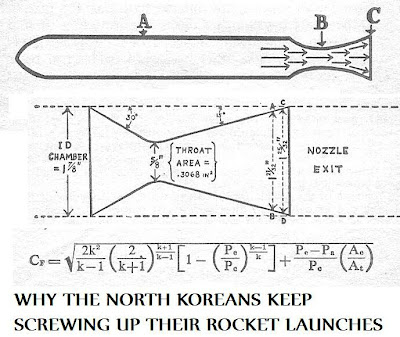 Watching the last missile mishap of the North Koreans was a hoot. It almost reminded me of the comedy of errors that accompanied our own initial flights, when assorted Vanguard rockets, Atlases went kaput on the launch pads or had to be blown up. Eventually we got it right, and an Explorer satellite could finally be launched and Alan Shepherd could take a first safe ride on May 5, 1961.

Give the North Koreans minor credit for trying, but now they are basically the laughing stocks of the world because of their ineptitude. Worse, this ineptitude comes at a tragic cost to its hungry people who now are deprived of an aid package originally earmarked but now cancelled because of this missile launch attempt.

What have they been doing wrong? One can only speculate but having launched my own small, amateur rockets in the 1960s, a pretty solid guess is that their exhaust nozzle efficiency is below par because of terrible design.

The efficiency itself can't be directly measured, but when I constructed my own rockets I used a proxy called the "effective thrust coefficient", Cf, with chamber pressure P(e) while atmospheric pressure is P(a) = 14. 7 psi, at sea level. The ratio of specific heats (Cp/Cv) for the combustion products is k.

The combustion chamber cross-sectional area (A(e)/ A(t) is the ratio of nozzle exhaust area to throat area) given by:

Of course, none of the preceding would by any use whatsoever for any snoopy N. Koreans lurking on the net and trying to get an edge up on a future launch, because these very critical dimensions must be calculated for a particular propellant (I used Zn S) and chamber size. Since I've no idea what the particulars are for their rocket (and don't really care) this is purely an academic exercise . They'd be foolish to try to apply it for their own purposes. (Also, in case any NSA spooks out there are currently dumping loads in their pants by reading this, chill out.)

My point? Well, if they tried to use any of this to improve or enhance their chances of a successful rocket launch they would be badly mistaken. What applies to a small single stage amateur rocket doesn't necessarily apply to a multi-stage missile. Why would it? (Apart from the fact the latter is also liquid fueled).

All they would get for their trouble is yet another dud launch, and more laughter from the world. I mean, which nation really wants to be known as the "Bozo" of the planet?
Posted by Copernicus at 1:54 PM