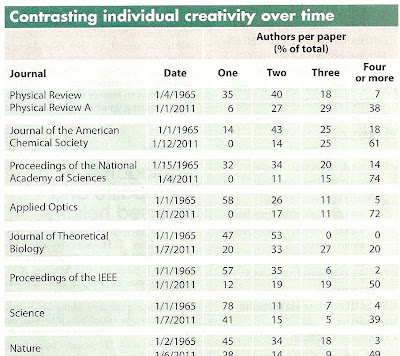 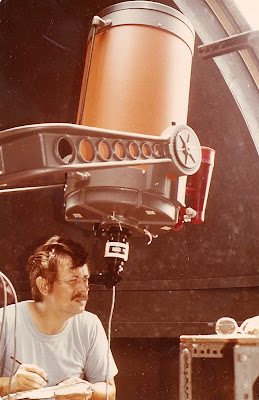 Making H-alpha observations at the start of my thesis project seeking to find the relationship between sunspot morphology and geo-effective solar flares. A distillation of all the work can be found in my book, 'Selected Analyses in Solar Flare Plasma Dynamics'.

Having learned some three years ago that roughly 0.0265% of scientific papers are actually read by peers (outside the referees), it perhaps comes as no surprise that now we are seeing a lack of creativity and originality in many of the papers submitted to professional journals (cf. 'Too Many authors, Too Few Creators', Physics Today, April, p. 9).

In this (somewhat) shocking piece, we learn that as the number of papers published has gone up (according to the author some of his peers reported "800 papers published" (which is absurd) the number of contributing authors has also increased. As with all multi-authored scientific papers, one never knows - unless specifically discussed- the exact role of any one co-contributor.

As the author observes:

"A person even slightly involved with a project could be added as an author. What began as an innovative topic of investigation became an opportunity to be published and thereby nicrease one's personal citation numbers. Thus, participants who simply made measurements or converted the measurements into appropriate numbers, or kept the equipment operating were all listed as purportedly creative co-authors. What was actually the creativity of one or two authors became the work of a great many. And each paper carried the name of the professor whose contract or grant paid for the work."

Of course, this is patently ridiculous, and demeans the personal citations value. But this sort of "citation inflation" is actually on a par with grade inflation - in the latter case fueled by the injudicious use of "Student Evaluation forms". (Where each student in a given class is allowed to rank his professor across a spectrum of attributes, including teaching aptitude).

While the Eval forms sound rational and fair, over the years they mutated into vehicles for grade extortion. As one student informed me in one of my Calculus Physics classes back in 1992:

"You may well be a great teacher. But....if I don't get at least a B in this class I'm gonna give you a lousy evaluation."

Of course, I refused to kowtow to such blackmail. So he and most of his fellow slackers (about 55% of the clas) delivered less than favorable evaluations. Difficult to swallow, but unlike most profs who would yield to such pressure, I refused to comply. (Okay, apart from having the option of another job in a radiotherapy software company available if the evals were used as a basis for promotion)


The result of this collective extortion? Grades across all subjects have become inflated to the point they're essentially meaningless. Whereas you had 30-35% of students, say at Loyola, getting D's and F's in 1964-65, now you are likely to see 0%. Whereas 40-45% of students received C's back then, now it's more like 10%, if that. Most students at most universities receive As and Bs which obviously makes those grades nearly useless. (A reason why more and more schools now rely on the Graduate Record Examination to get a better take on a graduating college student's aptitude....or lack of it).

As can be seen from the table attached, a parallel process has occurred with paper citations. For example, in The Physical Review issue of 1/4/65, the percentage of one-author papers was 35. By 2011 (1/1/ issue of Physical Review A) that had fallen to 6%. Similar percentages occur throughout.

This tells me that paper citation numbers, like student grades, are essentially meaningless.

The author then refers to recently graduating Ph.D. students who display the same lack of creativity and effort. According to the author:

"I have found the presence of the basic building blocks of the science decreasing with each passing year. When a recent Ph.D. in a physical science said that helium formed diatomic molecules I knew we were in trouble."

In essence, what he's saying is that even the new Ph.D.s are being diluted. Much of this has to do with placing priority on leaving grad school with a "raft of publications" (all with co-authors whose contributions are dubious, including the Ph.D. student himself) instead of single papers published by the candidate.

In my own case, I not only extracted all the data and rendered all the measurements and observations for all five of my papers included in the Thesis submission, but I wrote every word of every one of those papers - with only minimal (maybe 3 single sentence) changes on advice from my adviser. Each one minor, i.e. referring to H-alpha flares fully, as opposed to H with the Greek letter "alpha" behind it.

The only other thing my advisor did is render a couple diagrams for one paper, and a single diagram for a third. As a courtesy, I appended his name in the primary author position, though in retrospect I have come to question that decision. But anyway,.....I know what I know.....and despite his name in that position know I did the bulk (99%) of each co-authored paper, and 100% of the others included with the Thesis submission.

As for creativity, I also conceived the problem entirely on my own, in the form of the question as to the extent to which particular sunspot morphology might incept geo-effective solar flares (the type that cause short wave blackouts, fadeouts, and other EM spectrum disruptions.) At the end of the day, my work had led to the discovery of the "SID Flare". (Sudden Ionospheric Disturbance- producing flare).

It is doubtful based on what the Physics Today author writes, that a minority of Ph.D. students today could conceive their own problem to pursue without the advice or major input of their adviser, or others in the department. Additionally, there are likely far fewer who are able to conceive how to resolve that problem, including the most effective measurements-observations....far less quality predictions to test their hypotheses.

Perhaps, along with our space program (now relegated to hiking rides to the Space Station with the Russkies), we can attribute this to one more element in the lengthening catalog of national decline and diminution. Too bad so many exceptionalists are in denial!
Posted by Copernicus at 9:07 AM