Nuclear Power Carries Risks, But Is Essential To Complement Any 'Green' Energy Initiatives 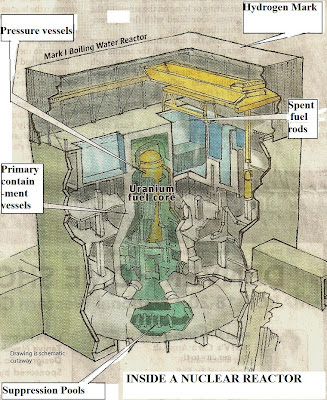 “The fact that our society can‘t survive on alternative energy should come as no surprise, because only an idiot would believe that windmills and solar panels can run bulldozers, elevators, steel mills, glass factories, electric heat, air conditioning, aircraft, automobiles, etc., AND still have enough energy left over to support a corrupt political system, armies, etc. Envision a world where freezing, starving people burn everything combustible -- everything from forests (releasing CO2; destroying topsoil and species); to garbage dumps (releasing dioxins, PCBs, and heavy metals); to people (by waging nuclear, biological, chemical, and conventional war); and you have seen the future. “  Jay Hanson, (Brane Space, May, 2010)

Three Mile Island, Chernobyl and Fukushima.  The names of these 3 nuclear disasters are etched forever in our memories - at least for those who were alive at the time they occurred.   For those who weren't, the Chernobyl series alone, e.g.

Is enough to put you off nuclear energy forever.  But is that a wise or intelligent choice? Can we even afford to make such a limiting choice given our rising energy needs and ever increasing global population?  Is one nuclear disaster enough to disable a nation's nuclear energy potential and options?

Let's start at the top. Although we'd all love 'green' or alternative energy sources alone (solar, wind, geothermal etc.) to provide all or most of our current energy needs, the cold hard fact is they can't.  What we refer to as the energy intensity of density is simply too low, too feeble to meet the demands of an advanced industrial nation that devotes enormous resources to war-making (jets, battleships, aircraft carriers, missiles etc.) as well as to manufacturing everything from cars to jet liners.

For example, a BTU of oil (oil before it is burnt) is fundamentally different than a BTU of coal. Oil has a higher energy content per unit weight and burns at a higher temperature than coal. It is also easier to transport, and can be used in internal combustion engines. A diesel locomotive wastes only one-fifth the energy of a coal-powered steam engine to pull the same train. Oil's many advantages provide 1.3 to 2.45 times more economic value per kilocalorie than coal. This means you need to factor that increase in for coal  (OR - for any combination of non-fossil fuel sources) to get the same amount of work done.

Ditto with solar. Unlike energy derived from fossil fuels, energy derived from solar power is diffuse and also extremely intermittent: it varies constantly with weather or day/night. If a large city wants to derive a significant portion of its electricity from solar power, it must build fossil-fuel-fired or nuclear-powered electricity plants to provide backup for the times when solar energy is not available. Solar power has a capacity of about 20 percent. This means that if a utility wants to install 100 megawatts of solar power, they need to install 500 megawatts of solar panels. This makes solar power a prohibitively expensive and pragmatically poor replacement for the cheap and abundant fossil fuel energy our economy depends on, especially if one intends to use it to operate missile factories.

Projecting ahead to 2050, the key problem is that the quality of the oil itself will decline in relation to its energy value today. By 2050 the  oil-based food allocation will be less than 0.2 liters per person per day. Thus it will be majorly reduced when the population is an estimated 1.5 billion greater. Someone must starve, billions will starve!   Unless an intense, supplemental energy source can be incorporated before alternative energy options are fully developed.
Meanwhile, exacerbating the problem of finding and implementing adequate fuel -energy sources is the continually increasing human population.  Global energy consumption has risen from barely 21 EJ (exajoules) in 1900 to 318 EJ in 1988 to over 410 EJ today.  According to The Physicist's Desk Reference   solar, geothermal plus wind will only have contributed:

But this is exactly the rate of increase in energy use for additional global population per year! In other words, the added total alternative energy benefit is exactly lost because we're constantly adding an extra percentage of humans to consume the benefit!  This is why the deluded economists proposing increased global population to enhance GDP are shooting themselves in the foot.

The stage is set to add even MORE humans by 2050, topping off at 9 billion by many estimates, which will necessitate - if we still plan to retain solar in the mix - converting an area the size of Europe to solar panel arrays.
Matt Savinar (Life After the Oil Crash) has shown that NONE of the alter native sources usually cited: from solar to methane hydrates, to geothermal hot dry rock technology, to natural gas or wind,  will do squat to totally replace the energy now being consumed for our entire infrastructure, from powering a military-industrial complex with umpteen bombers, and now missile defense, plus more tanks for occupations and wars, not to mention sustaining growth in industries, new computers, maintaining the electrical power grid and building new nuclear reactors.
Speaking of nuclear (fission) reactors, is that the answer? Well with few other options it has to be.   As a recent WSJ Review article (January 8-9,  'Nuclear Power: Part of the Climate Solution',) noted:
"Nuclear energy is a rare thing—a carbon-free energy source that isn’t hyped and enjoys bipartisan support in Washington. The big question now is whether new technologies that might lower the costs actually work. "


Before that, let's look at Germany's backing off of nuclear as a cautionary tale.  Before 2011 nuclear power derived from nuclear fission e,g,

accounted for about 25% of Germany's energy production.  Then came the Fukushima nuclear accident in March, 2011 triggered by the most powerful earthquake ever recorded in Japan. In the wake of the accident Japan's decision to shut down its nuclear plants - instead of phasing out coal - resulted in increased consumption of fossil fuels.  This generated air pollution that can "statistically be  linked to thousands of deaths" according to the WSJ piece.   Meanwhile, Germany's nuclear energy use declined to 10% after Fukushima and its last three reactors are scheduled to close down this year. As a result, Germany will now emit 8 tons of CO2 per person compared with less than 5 tons for France with its still powered fleet of reactors.

The lesson of the Japan Fukushima nuclear emergency is not to halt construction of nuclear power plants but to build them better, with more redundancy, safeguards.   Building many small reactors (SMRs) may also be more safety-conscious than building a dozen or so massive ones. Is there a way to build nuclear fission reactors with less risk? The answer may lie in modular units as described at length in the WSJ Review piece, e.g.:

“Modular” nuclear fission plants are where the real promise lies. Simpler designs, standardized components and passive safety features all help reduce costs. Being smaller can make it easier to find sites and integrate into a grid with intermittent renewables. Proponents estimate that modular reactors could more than halve the cost and build time associated with traditional ones. One approach uses existing technologies to build small modular reactors, known as SMRs. They generate anything from a few megawatts to 500, compared with around 1,000 or more for a typical conventional reactor. The controlled fission reaction splits uranium, which heats water into steam, driving a turbine to generate electricity. Water also cools the reactor. SMRs use passive safety features, such as placement underground or in a pool of water, to reduce the need for some more expensive measures. It makes them cheaper to build, but opponents worry it could be a recipe for more disasters.

Well, one would hope not but this needs to be demonstrated.  A recent TIME essay ('The Promise of Nuclear', p. 44, January 24) highlights a company called Oklo whose strategy is "to make reactors by the can. The per-megawatt construction costs might be higher at first but production units in a factory would give the company the chance to improve its processes and lower costs."  Desperate? No, because as the piece points out there is an increasing realization we won't be able to shift from fossil fuels without nuclear power.  (Well, not unless the global population is cut by two thirds and all energy- intense, large scale manufacturing is halted.)

In the meantime the most formidable environmental challenge of nuclear power remains the disposal of the accumulated radioactive waste products.  Some of these require tens of thousands of years to decay (in one case up to 329,000 yrs.) which also makes the decommissioning of a reactor a major undertaking. Fortunately, there isn't a lot of it. In the U.S. the total of nuclear waste generated since 1950 amounts to some 85,000 tons.  That's a lot, but nowhere near the tens of billions of tons of CO2 which would have been generated had the electricity (from nuclear plants) come from fossil fuels instead.

What will be next?  From the EJ projections given earlier, we need nuclear ramped up to at least provide a total of 11-15 EJ by 2030, and at that time the collective alternative sources should be at around 8 EJ. With natural gas likely down to 6 EJ from increasing operations costs that would total an optimum "bridge" amount of  34 EJ. But even this will be insufficient unless population growth is brought under control, and conservation dramatically increased. In the meantime, there is some glimmer of hope that nuclear fusion, e.g.

May finally be nearing a practical development (though not implementation) level.  From a February 10th WSJ report, we've learned:

A device based at a U.K. facility in Oxfordshire has produced the highest sustained nuclear-fusion energy ever recorded.  (The Joint European Torus, or JET, in Oxfordshire is a doughnut-shaped device called a tokamak that can heat gases to 150 million degrees Celsius inside a vacuum).  The results of the December experiment, which generated 59 megajoules of fusion energy for five seconds, “demonstrates we are on the correct path” with regards to nuclear fusion, said Rafael Juárez Mañas, an engineering professor at the National Distance Education University in Madrid who wasn’t involved in the research.

Which is remarkable given previous times barely managed to exceed 1-2 seconds. Still the primary goal has not yet been achieved: demonstrating net energy gain from the fusion reactions.