The lead story in The Financial Times Feb. 5th  sent literal chills down my spine, reminding me of the beginning of the British  film  'Threads'  -  summarized below in one Wikipedia entry:

The plot centres on two families as a confrontation between the United States and the Soviet Union erupts. As the nuclear exchange between NATO and the Warsaw Pact begins, the film depicts the medical, economic, social and environmental consequences of nuclear war.

Readers can get an idea of what quickly follows after NATO exchanges tactical nukes with the Russians in this clip from the film:

Before anyone starts asserting I am being "histrionic", or "hyperbolic", let's please bear in mind the Russians - since the Cuban Missile crisis -  have retained a 'limited use' nuclear doctrine.  That is to say, they reserve the right to employ tactical nuclear weapons if at anytime they feel overwhelmed by conventional armed forces, say from the U.S. See  e.g.

"The Bulletin of the Atomic Scientists ran a piece by Nikolai Sokov with the paradoxical title Why Russia calls a limited nuclear strike “de-escalation.” He wrote, “In 1999, at a time when renewed war in Chechnya seemed imminent, Moscow watched with great concern as NATO waged a high-precision military campaign in Yugoslavia. It became concerned both that “the United States would interfere within its borders” and that the “conventional capabilities that the United States and its allies demonstrated seemed far beyond Russia’s own capacities.

In response, Russia… issued a new military doctrine whose main innovation was the concept of “de-escalation”—the idea that, if Russia were faced with a large-scale conventional attack that exceeded its capacity for defense, it might respond with a limited nuclear strike.”

So what does this have to do with the FT-report?  Simply that, according to the FT account, "military and intelligence officials believe that Russia is planning to hold a big nuclear weapons exercise this month as a warning to Nato not to intervene if President Vladimir Putin decides to invade Ukraine. "

Further, Gen. Mark Milley, chair of the Joint Chiefs, and Avril Haines, Director of National Intelligence (DNI) , told lawmakers in the House of Representatives on Thursday that "Putin was planning to start the exercises in mid-February"  this  "according to a Congressional aide with knowledge of the closed-door briefing. "

The FT account is also based on the fact that Russia generally holds its annual nuclear exercises — which involve testing intercontinental ballistic missiles from land, sea and air — in the fall. "However,  the US believes Putin has decided to hold them earlier this year as a show of strength in the event that he orders his military to further invade Ukraine."

The show of nuclear force in launched ICBMS, and possibly hypersonic, nuclear warhead- bearing missiles- would then be a not-so-veiled message to the U.S. and NATO not to interfere.

Further, according to the FT:

"The U.S. believes that the optimum time for a Russian invasion would be from mid-February to the end of March. Holding the exercises to coincide with an invasion would send a powerful reminder to Nato about the strength of Moscow’s nuclear forces, which are the largest in the world. "

Russia has just under 4,500 nuclear warheads in its current stockpile, according to the Federation of American Scientists, and this magnitude of weapons - if detonated- would be enough to convert the planet into a burning cinder about 6 times over. (Most are in the megaton range or higher). According to Rebeccah Heinrichs, a nuclear weapons policy expert at the Hudson Institute in Washington:

“It would be an incredibly provocative and foreboding message it they did that simultaneously with an invasion of Ukraine,”

Indeed, and it begs the question of the U.S. - NATO response. Should the latter really charge into the Ukraine with fully -armed conventional forces to drive the Russians out?  We know the far Right media is all in favor of such a 'macho', 'show 'em not to mess with us'  response, and that includes the WSJ op-ed pundits, editors.  We also know if Biden took the high road and resisted any overt counter-aggression he'd quickly be labeled another "Neville Chamberlain" or worse by the Rightists - looking for any excuse to pile on after the Afghanistan pullout last August.

It is clear to me that Biden needs to exercise the same restraint as JFK did during the October, 1962 Cuban Missile crisis.  (Those wishing to get an in depth perspective should read: The Kennedy Tapes: Inside the White House During the Cuban Missile Crisis  by Ernest R. May and Philip K Zelikow.)

The authors document how the nation had reached the stage of 'Defcon 2' just below all out nuclear war.   Kennedy saved our nation's bacon and likely the whole world's by refusing Gen. Curtis LeMay's pressure to invade and bomb the Cubans. (Which we now know would have been a colossally bad idea given Castro had at least 93 IRBMs,  ready to launch at the U.S. in case such an invasion transpired. Robert McNamara - JFK's then Secretary of Defense, discovered this when he visited Cuba thirty years later.)

Kennedy ended up using his brother Robert, as a back channel contact with the Russians, to: i)Promise not to invade Cuba, and ii) to remove all Jupiter missiles from Turkey, if the Russians promised to remove their nuclear missiles from Cuba. The communication resolved the crisis, finally, and the world lived to see another day without a nuclear holocaust.

Let's also try to grasp that the standoff with Ukraine we behold today is not all on the Russians.  People may - or may not - recall that former Soviet leader Mikhail Gorbachev allowed the Soviet Union's breakup but in return the U.S. (under Geo. Bush Sr.) agreed not to expand NATO.  Instead, Bush Sr. then Bill Clinton and Bush Jr. betrayed the agreement and allowed expansion to the east, setting off massive Russian paranoia about encirclement - present since the era of Peter the Great.

NATO  asked Poland, Hungary and the Czech Republic to join in 1999. Then in 2004 came Bulgaria, Estonia, Latvia, Lithuania, Romania, Slovakia and Slovenia. To increase the net-drawing round Russia’s borders, Albania and Croatia were added in 2009 under Obama. At the Chicago NATO summit in May 2012 it was declared that “At the 2008 Bucharest Summit we agreed that Georgia will become a member of NATO.."

The analogical path out of this crisis to what JFK and RFK achieved in October, 1962 is clear: The U.S. needs to promise the Russians that absolutely it will not orchestrate any NATO membership for the Ukraine.  In return Putin and Russia must promise not to invade the Ukraine, and withdraw all border forces (including in Belarus) as a signal of good faith.   Failure to achieve this may portend an outcome no one really wants to see.

The world public came away with a misunderstanding of how the U.S.-Soviet confrontation had been brought to a peaceful conclusion. The reason was that the U.S. missile removal from Turkey was kept secret. Thus, it appeared that Kennedy, who had taken a hard line publicly, had won a significant Cold War victory over Khrushchev. The popular misunderstanding was encapsulated in Secretary of State Dean Rusk’s comment that the two men had stood “eyeball to eyeball,” and Khrushchev “blinked.”

What really happened, however, as we now know thanks to later revelations by Rusk and Secretary of Defense Robert McNamara, is that Kennedy and Khrushchev recognized, to their mutual dismay, that their two nuclear-armed nations had arrived at an incredibly dangerous impasse and were sliding toward nuclear war. As a result, they did some top-secret bargaining that de-escalated the situation. Instead of stationing missiles on the borders of both nations, they simply got rid of them. Instead of warring over the status of Cuba, the U.S. government gave up any idea of invasion.

Russia | Ukraine
Scenario for a War in Eastern Ukraine: The United States Views Russians Just as the Nazi’s Did in World War II 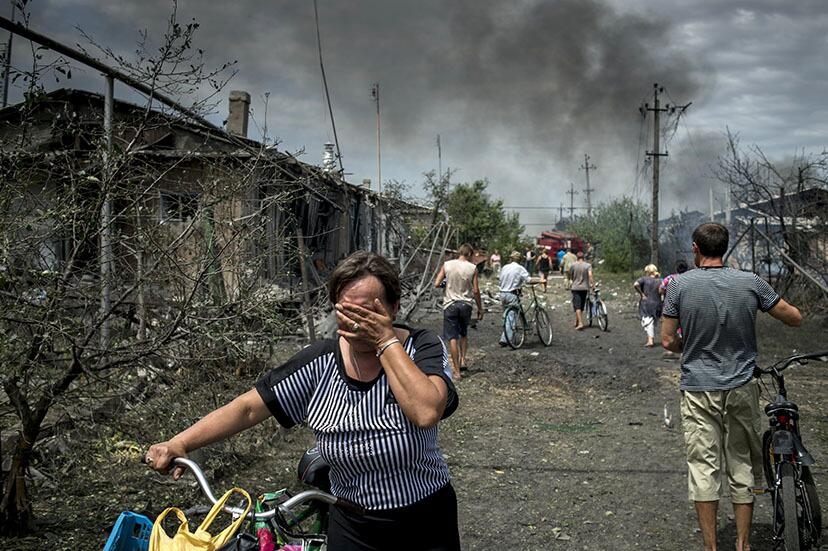 Presidents Bill Clinton, George W. Bush, Barak Obama, Donald Trump and now Joe Biden have pushed NATO expansion right up to Russia’s border. For example, Estonia and Latvia are NATO members. Estonia is 120 miles from St. Petersburg. NATO is purely a military alliance led by the USA. Its members serve simply military bases (some probably with tactical nuclear weapons) for US military forces and its many military contractors.

China | Russia
The Russians Are Coming! But Are They Bringing the Chinese? Peace & Justice
How Can the US Accuse Any Nation of Violating ‘Rules-Based International Order’?