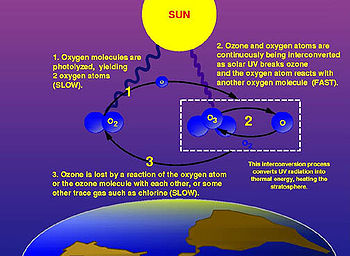 Ozone layer seen from space with Moon slightly to the side.

One of the events that got me interested in solar research occurred when a massive solar flare shredded the ozone layer in the early 1970s. The then Skylab orbital observatory reported up to 80 percent of the ozone layer "eroded" by one single super flare (class 4B optical, and X 9 x-ray). The event also aroused my curiosity regarding the ozone layer and its importance for Earth - or rather the organisms that inhabit the Earth.

By now most people know that ozone O3 - is a form of oxygen - and found from 6- 32 miles  above Earth's surface or at the lower edge of the stratosphere. It basically is critical in protecting life forms from the effects of the Sun's ultraviolet (UV) radiation. Take that layer away and you will behold sunburns the likes of which would rival 20 hours straight in a tanning bed, not to mention an explosion of skin cancers.  Minus the ozone layer, in other words, life as we know it would not exist.

So, it is important what happens to that layer.

What disturbed many space and atmospheric scientists is that the ozone layer over the Antarctic appeared to be especially susceptible to erosion, but not from solar flares. We became aware of this via tracking of ozone concentrations by NASA satellites since the 1970s. This paved the way for a study that tapped into that database thereby discovering the adverse role of chlorfluorocarbons or CFCs. This ground breaking research by Susan Solomon and her team discovered that these chemicals - often released via hair sprays, spray deodorants etc. - reduced stratospheric ozone concentrations all over the world. At that time (1986) industries also used CFCs in refrigeration and dry cleaning. The reduction was observed to be especially bad over Antarctica hence the term "ozone hole". One by product of the work was to explicate the processes underlying ozone hole formation. It was known, for example, that CFCs destroyed Antarctic ozone every spring. But only later was it revealed that the process begins even before winter.  It commences, in fact, at the summer solstice or shortly thereafter when the Sun rises causing light to strike the ambient CFCs, breaking its chemical dons and freeing chlorine (e.g. CCl3F → CCl2F. + Cl.    ) The freed chlorine atoms (at the end of the right side of the above equation) then strip the oxygen  (O2) from the ozone (O3) to form other chemicals destroying the ozone itself. This leads to the emergence of an "ozone hole" which generally reaches peak area in October. Solomon et al more recent research can be accessed at this link: http://bit.ly/science-ozone It shows the extent to which changes in atmospheric chemistry and human activity are inextricably linked. Specifically, the authors show how public policy efforts i.e. (to ban CFCs) over decades have paid off by shrinking the Antarctic ozone by more than 4 million square miles (a 16 percent decrease) since 2000.

Now, the new concern, as reported in Tuesday's WSJ ('Ozone Thinning Over Populated Areas', p. A3)  is that the protective ozone shield may be thinning over the most heavily populated areas of the planet.   We call the ozone layer (see image from space) "protective" because it inhibits the influx of hazardous ultraviolet (UV) radiation from the Sun. If this passed through in too high an intensity it would damage DNA and heighten cancer risk as well as cause plenty of cataracts.

In the new analysis, led by physicist William Ball and atmospheric scientists at the Davos World Radiation Center (and ETH Zurich) in Switzerland, a decrease in the O3 concentration has been found at lower levels of the stratosphere - but now in non-polar regions.    The decline has also been found to be larger than the rise measured at higher altitudes, e.g. over the Antarctic. These results were reported on Tuesday in the journal Atmospheric Chemistry and Physics, published by the European Geosciences Union.

Still, atmospheric specialist Sophie Godin-Beekman, of the French National Center for Scientific Research, points out that the observed behavior could be just a "temporary variation within the broader band of ozone in the atmosphere'.   This is possible given any changes in density are unusually difficult to measure and may take decades to unfold.

Anne R. Douglas, atmospheric scientist at NASA's Goddard Space Flight Center in Maryland, put it this way: "Detecting an ozone response at middle latitudes, where the chemical changes are small to being with and the dynamic variability is much larger, remains challenging."

This again, is an admission that atmospheric science is at the practical limits of confident measurement.  What is needed now is a radical improvement in data reduction methods and observation techniques, including more refined ozone detecting instruments.