Sorry! You Have NO Constitutional Right To Own An AR-15! 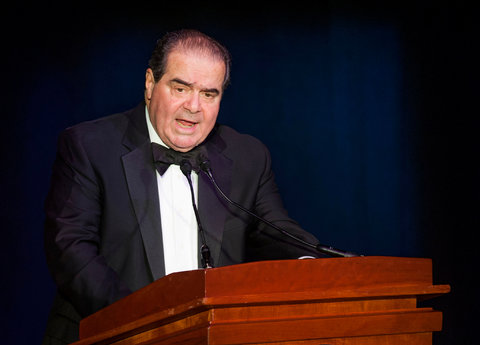 Justice Antonin Scalia - your total conservative - asserted in the Heller case that no citizen has the right to own an assault weapon.

Seeing the Parkland, FL kids this a.m. confront the hidebound Reepo lawmakers in the Florida legislature was dumbfounding.  The kids had been assembled in groups of 10 to thrash out questions with these nitwits but soon learned they could as well pound sand or talk to walls.  One girl asked the leader of the House why such vicious weapons were needed at all, such rifles that are military issue and designed specifically for combat. The fool actually responded that they were often used by his constituents for hunting, especially for wild Boar!

This ought to have brought the kids to peals of howling laughter, but most took him seriously because - obviously - they lacked any inkling or knowledge of what hunting such game was like in the past. But to most of us who grew up in the sixties, the idea of hunting a wild Boar with a military style weapon is laughable. What? You think you're going against an Abrams tank!? It's a fuckin' animal, for god's sake!

In the olden days we'd select a  Remington 30.06 with hollow points to do the job, but nowadays the real hunter -  as opposed to a frightened dwarf (who needs a semi-automatic)-  would more probably choose the the Savage 11 FCNS Hunter, simply because it's totally capable of bringing down a 300 lb. boar from 400 yards away.   The point is that it's laughable any real man or hunter would resort to an AR-15 to kill a hog unless he was ass-faced pathetic and a total loser and weakling who needs an unfair advantage against game. That's why that FLA House idiot's response was codswallop.  As blogger David Lindorff put it recently:
,
An AR-15 is not a hunting weapon. In fact there’s a reason it’s called an “assault rifle.” As a hunter, unless you’re an atrocious shot and are hunting random flocks of small birds, you certainly don’t need to be able to fire powerful ammunition of two bullets per second — the rate at which experts sayan ordinary person could be able to pull the trigger."

But the kids, at least for now seem to have bought this daft rationalization of why military style weapons are needed in civilian society.

The larger point is that NO one has the constitutional right to own an AR-15 or any other assault weapon, by which I mean all semi-automatics originally designed for military use.  I already cited the controversial 1939 case wherein FDR's Solicitor General framed the argument to the Court:
"The Second Amendment grants people a right that is not one which may be utilized for private purposes but only exists where the arms are borne in a militia or some other military organization provided by law and intended for protection of the State."
The SC decision was unanimous.

Now, fast forward to 2008 and  Justice Antonin Scalia, writing the majority opinion in District of Columbia v. Heller, in which the Supreme Court reversed a long-held position and ruled that the Second Amendment did give Americans an individual right to own firearms.  The court said the District’s ban on handguns in private homes went too far, but that regulation of gun ownership was compatible with the Second Amendment:

As Joe Scarborough put it this morning: "Some say this is embedded in the constitution. It is not!"

"Go back and read Heller, 2008, what Scalia and the Supreme Court said. You're right, you can have handguns in your home, and shotguns to protect your family. But the court has allowed states  - like Maryland (2017)  to ban assault style weapons.  They let this and other laws stand   - without challenge - as constitutional ."

This is important to know, because without being armed by facts, and in the heat of argument, the assault weapons defenders will throw all kinds of lies and BS at you, as that Florida House moron tossed at the Parkland student,  re: needing an AR- 15 to hunt wild boar.

As Joe Scarborough put it:

"On the substance of the matter let's be clear because there's so many people that say so many stupid things every day. Ignorant things about guns like on my twitter feed. Like rights to assault weapons. But look,  those are not constitutionally protected rights because states can limit those rights  Like the first amendment, second amendment rights are limited.

If you want to make the argument that the Supreme Court should protect your rights to have military style weapons, that's legitimate.  But if you say it is your God-given constitutional right to have an AR-15 that is not what the second amendment says. And it's not what Justice Scalia says or the Supreme Court says."

The Stoneman Douglas students need to learn and process these facts when they go up against those who try to tell them owning these weapons is an American "right". No it is not. It may be a desire for some 5 percent of guntards, but it is no right.

Footnote:  In the guntards' most recent setback, a "2nd amendment"  challenge to California's 10-day mandated waiting period for gun purchase, the Supreme Court by an 8-1 verdict again set limits on their "rights" - siding with the state.