The St. Valentine's Day Massacre In Florida - You Can Blame Governor Rick Scott Too! 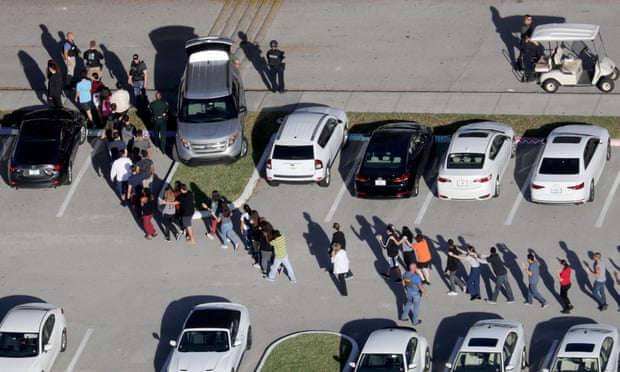 "Everybody's sayin' to themselves 'I wanna be safe. So my job as governor is to try to do everything I can to provide any services they need.  Ya know, hug people that wanna be hugged...."


First, let's make it clear the little scum ball who invaded Marjory Stoneman Douglas High and opened fire yesterday - killing 17 - is a maggot who deserves one of two ends: 1) Being fried in the Florida electric chair known as "Old Sparky" - maybe set it back up again after yrs. of disuse, or 2) being locked up in what - in the olden days - we called a "nut house". There given electric shock therapy several times a day while being kept in a strait jacket for the rest of his sorry ass life.

But while Nicholas Cruz will live in infamy along with the Columbine killers - who still cast a shadow over my state (Colorado)  - and is indeed the immediate source of the horrors that unfolded yesterday, we cannot let Florida's scumball Gov. Rick Scott off the hook. Not by a long shot, given Scott and his Repuke cabal in the Sunshine state have been responsible for passing some of the most lax gun laws in the nation.

This is important, because while the NRA bullshit lobby insists any new regulations - say strict licensing, fingerprinting   - won't do diddly, the state of Massachusetts and its own gun laws prove otherwise. As we learn from Wikipedia:


"Massachusetts Law requires firearm owners to be licensed through their local Police Department or the Massachusetts State Police if no local licensing authority is available. A license is required by state law for buying firearms and ammunition. An applicant must have passed a State approved firearm safety course before applying for a license.
All applications, interviews, fees, and fingerprinting are done at the local Police Department then sent electronically to the Massachusetts Criminal History Board for the mandatory background checks and processing. All approved applicants will receive their license from the issuing Police Department. All licensing information is stored by the Criminal History Board. Non residents who are planning on carrying in the state must apply for a temporary license to carry (LTC) through the State Police before their travel."

Now compare with Florida's lax laws, thanks to the likes of Rick Scott - who is convinced the most he can do for his state citizens is to dispense hugs and feel good platitudes:

Florida law prohibits localities from regulating firearms, other than with regards to zoning laws (i.e., for restricting where gun sellers may locate their businesses), the imposition of a 5 day waiting period to purchase firearms, and a background check for any sale of a firearm in the county where any part of the transaction occurs where the public has right of access.

Note carefully how this state lame law prohibits localities - like Parkland - from regulating firearms, i.e. restricting locations of gun sellers.  Wonder why the mass murderer Cruz found it so easy to get his AR-15? There's your answer. If you think that's atrocious, consider the state legislature - under pressure from Scott - is now considering legislation to do away with background checks entirely.

Let us note here  that the rate of gun deaths in MA is 2 per 100,000 compared to Florida's rate of 13.1 per 100,000. In other words, Florida's rate if more than six times greater. Why is that so? Is it because FLA has six times more mentally sick people? No, it's because Massachusetts has stiffer gun oversight. In Florida?  The wannabe killer just had to endure a five day wait and he completed a legal purchase. Now, put him instead in Massachusetts where he'd have had to first pass a state approved gun safety course, then be licensed and fingerprinted. Does anyone but a gun nut really believe he'd have done all that? But I submit it's precisely this rigorous process that weeds out nuts and criminals from the outset.

In a tweet this morning Trump made no mention of gun control, instead focusing on Cruz’s background. “So many signs that the Florida shooter was mentally disturbed, even expelled from school for bad and erratic behavior,” Trump wrote. “Neighbors and classmates knew he was a big problem. Must always report such instances to authorities, again and again!”


Off Donnie Dotard's criminal radar was how easy it was for the punk to get unlicensed access to the weapon of his choice in the state of Florida, to partly fulfill his proclaimed ambition of "being a professional school shooter."    But why be surprised that a criminal "president" - who's manifestly colluded with a foreign power to overthrow our election system  would be a fan of another criminal, Rick Scott.

WOAAH! Excessive rhetoric? Nope! People need to grasp  Rick Scott is basically a criminal like Trump. When Rick Scott was in charge of Columbia HCA he bilk ed Medicare out of hundreds of millions and was fined heavily for it.  Indeed, he oversaw what has since become known as the largest Medicare fraud in  history. So in many respects, Scott and Trump are two peas in the same vermin pod. Noooooooo.....Scott didn't pull the trigger of that AR-15 that slaughtered those 17 victims. But, he did loosen the gun regulation laws to the point that a deranged maniac like Nicholas Cruz  could walk right into a gun shop or show and buy his choice of assault weapon.

Cruz bought the damned weapon, but Rick Scott "left the door open"  so he could.

As Lawrence O'Donnell put it last night on his "Last Word":

"Governor Rick Scott of Florida has done everything he possible can to make sure that the AR-15 assault weapon  is easily obtainable by any mass murderer in America.  That has been the mission of Republicans like Rick Scott. The reason that weapon is available in Florida - over the counter for anyone 18 years of age or older - is because of politicians like Rick Scott, who has made sure the weapon is as easy to buy as an automobile."

O'Donnell then played a clip of this foul maggot governor being asked the following question by a reporter:

"What business does a 19 year old have with owning an AR-15 specifically?"

Realizing he was cornered like a rat, Scott tap danced all over the place, ending with some vapid remark along the lines of:  "We're gonna learn all the facts then we can determine the future ...you know,  how we can continue to make this place safe,"

How "to make this place safe?" You fucking bozo! You impose strict licensing laws like Massachusetts!  And then enforce them!

But like his fellow Florida imp - Marco Rubio - who also questions whether any gun law could work to save lives in Florida - Rick Scott has his balls in hock to the NRA. They own his ass like they own Rubio's and most of the poltroons that make up the Repuke Party.

Bear all this in mind as you further learn about this  tragedy which appears to be the eighth deadliest mass shooting in modern U.S. history and one of the worst ever school massacres.

When will Florida and the rest of the lax gun states get serious about protecting their citizens? Will it be after a heavily armed maniac barges into a nursery with a newly purchased AR- 15 (no background check) and slaughters 50 infants in their cribs? Janice doesn't believe things will change even then, and frankly, neither do I - so long as we keep putting verminous rats  like Rick Scott into office.