Can We All Finally Admit Trump Is A Traitor?

Some folks, ensconced in media or defensive personal bubbles,  will likely believe this question is hysterical or off the wall. But seriously, think about it for a moment. What the hell would you call the chief executive of a country - who has been repeatedly informed (most recently via Senate Intel Hearings) -    about an impending hacking of our next election,  but chooses not to do a fucking thing? If this bastard is not a traitor then what the hell is he? Tell me!

Yesterday in open hearings,  the heads of all the nation's intelligence agencies were asked if anything proactive was being done to protect the integrity of our midterm elections. Their answers all dovetailed: none had received  specific orders from the "president".  (I use scare quotes because I do not regard the turd occupying the office as legitimate and I certainly have no respect for him.  Those I have respect for I refrain from calling "turds", "offal" and "vermin".)

Sen. Angus King was so enraged in his questioning he nearly popped a blood vessel, asking: "How am I supposed to deal with this when the citizens of my state merely shrug shoulders about the risk to elections and say they believe the President?"  This is in regard to Trump's failure to do a goddamned thing to thwart foreign interference, even hacking of the states' voter rolls..  Indeed,  Director of National Intelligence Dan Coats was adamant at yesterday's hearing:

"Frankly, the United States is under attack. "

Again, if one knows the scale of the threat -and is the head of  the country -but does nothing to stop it what does that make him? It tells me he is a traitor, no euphemisms, no bullshit.

Coats went on to note that "the risk of inter state conflict is the highest at any time since the Cold War."  This is based on a 28-page intelligence community report, asserting that Russia views the 2018 elections aa a potential target for hacking units backed by the Russian government, Recall in 2016 the GRU was behind the hacks in the effort to get Trump into office.

A number of Senators pressed the intelligence chiefs on whether Trump was taking the threat seriously. Sen Jack Reed, for example, asked: "Has the president directed you and your agency to take specific actions to blunt or confront Russian hacking activities that are ongoing?"

The answer from FBI head Christopher Wray: "We have no actions being taken specifically directed by the president."

The same answer was delivered by the other intel heads.

In other words, Traitor Trump is prepared to let it happen all over again.

Recall last month, in the midst of secretly meeting in D.C.  with Russian intelligence agents (which we only learned because Russian News broadcast it)  Trump refused  to impose additional sanctions on Russia for its meddling in the presidential election. This despite near unanimous support from congress and total agreement from intel agencies.

Experts note that as Trump simply ignores this issue the cyber attacks will become much more effective. What would be done with such a traitor president even fifty years ago?   Let me give you a clue: In late 1962, and early '63 JFK was believed to have been a traitor for: 1) allowing removal of Jupiter missiles from Turkey to appease the Russians after the Cuban Missile crisis, 2)  signing a nuclear test ban treaty with Nikita Khrushchev and 3) planning a total pullout of U.S. troops from Vietnam by calendar year 1965.   Of course, Kennedy's moves were only perceived to be traitorous, where in fact they were in the national interest. He was not, after all, conniving with Russians (the then USSR) to undermine U.S. elections or enabling any kind of attacks on the homeland.

Hmmmmm....seems to me the notorious "deep state" so often cited by the Trumpsters, sees no reason to act even as our entire election system is befouled and compromised.

All this has unfolded even as we also learned yesterday that  FBI director, Chris Wray contradicted the Dotard  White House about when the bureau had completed a background investigation of former Trump aide Rob Porter. The bum  resigned last week following compelling allegations of domestic violence, which features a black eye on one of the victims - Colbie Holderness.

Predictably, the Trumpies  claimed ignorance of any allegations of spousal abuse against Porter, who was promoted to become a close aide to Dotard.  That  continued until the moment Holderness'  graphic photos were published.   It was then left to the lying sack of shit, John Kelly, to try to explain it away i.e. "I only discovered there was an ongoing investigation 40 minutes after the allegations and the photos' release." Blah blah. 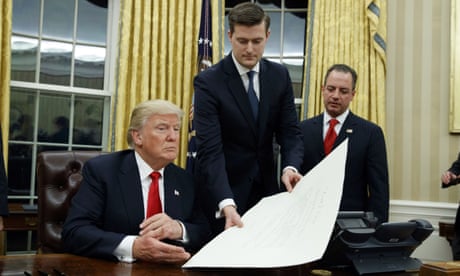 But Wray testified before Congress that the FBI had submitted a completed background investigation on Porter to the White House in July 2017 and later supplied two follow-up reports.

“We administratively closed the file in January” of 2018, Wray said, setting a date months before the White House officials said they knew about the allegations.

In other words, these vermin are consummate liars as well as traitors.  And they have the absolute balls to flaunt the red, white and blue? They really need a firing squad, like in the old days when treason was actually punished.

The saddest aspect? There are still too many of our citizens whose minds have been polluted by FOX News and WSJ editorial propaganda to be convinced this is all a Hillary-DNC plot to overthrow the Trump "election".   In fact, Trump and his crew of treacherous rats have done that all by themselves.  By their collusion with the Russkies (Trump has contacted Putin 8 times in the last year)  they've shown  they are illegitimate heirs to power - proven by the fact they needed the assistance of a foreign adversary to gain it.

As Janice has also pointed out, we may never ever be able to repair the damage these foul reprobates have done to our country. Each day they remain in power lasting assaults are inflicted on our civil discourse, our nation's honor and security, as well as our democratic institutions.  Many, indeed, e.g. David Frum in 'Trumpocracy",  believe the sowing of aberrational new debased "normals" poses a destructive force by itself.

I can just imagine my Revolutionary War ancestor Conrad Brumbaugh's reaction to this perfidy: "Is THIS what I and others fought for in the War of Independence, to put a future traitor and tyrant into the seat of  power?"

http://www.smirkingchimp.com/thread/p-m-carpenter/77774/fake-news-no-an-illegitimate-president
Posted by Copernicus at 8:42 AM

Feel free to also visit my blog at: http://traitor-trump.blogspot.com/

Will do that! Thanks for the link. I also encourage others to check it out.