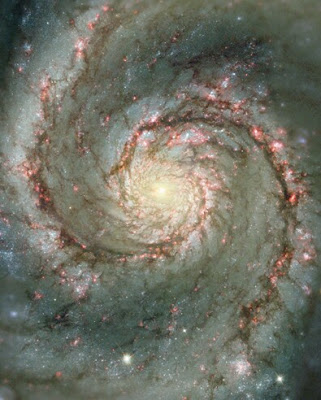 One explanation for the spiral arms in galaxies is the density wave model.


Question: I am an aeronautical engineer who has lots of math background so I am not afraid to ask a question on a theoretical or abstract area. Could you please explain the role of density waves in galaxies?  How good are these models really? What are some of the problems?

Your question directly touches on what engenders the spiral shape of a certain subset of galaxies.  Of course, one can roughly duplicate the shape using something as simple as dropping some cream in a cup of black  tea - then and 'Voila!' a mini-spiral "galaxy" forms before one's eyes. Of course, things aren't quite so simple for real galaxies, especially in terms of mathematically describing what happens to give their shape.

Interestingly, the use of density wave model development is largely contingent on the Boltzmann equation which is also used in space plasma physics. Thus:

where the ¶f/ ¶t are partial derivatives, and (¶f/¶t)C    is the time rate of change in f (the velocity distribution function) due to collisions, i.e. between masses within the system. Technically, the Boltzmann eqn. is applied to FLUIDS and for that purpose the galaxies to which density wave approaches or models are applied are modeled firstly in the fluid format. (It is easier when dealing with an agglomeration of some 100 or 200 billion separate stars and associated orbits to think of them as comprising a "fluid" as opposed to say, 100 billion separate bodies to be treated in a 100 billion -body problem of celestial mechanics!)

The referencing of stars, their locations and movements meanwhile embodies particulate approaches that are more kinematical in nature (but often less amenable to consistency with the density wave approach). Orbital assumptions are not simple by any means, and merely because a source says or asserts that "The stars in the inner part of a galaxy move faster than the density wave/s and the stars in the outer parts move slower than the wave/s." should not be taken too literally without posing a lot of further questions. (And one could argue here that "apples" and "oranges" are being compared because the two entities, stars and density waves arise from differing backgrounds - kinematic-particle based and fluid mechanical, wave based.)

For example, what class is the spiral? How tightly wound? One must recognize too that an orbit in a spiral galaxy that appears closed (e.g. elliptic) in one reference frame may not be so in another. As an example, assume the (polar) coordinates for a galactic rotating frame are given as (r, φ) with:

where Wp is the angular velocity of the rotating frame. Then orbits are described by a Hamiltonian (recall the Hamiltonian adds kinetic and potential energies of the system):

where the pr, pφ  are the particle momenta referred to the associated coordinates, and V(r) is the gravitational potential. The point is that H can change depending on the coordinates, and what is presented for the previous frame as H = E - J Wp (with simplification, pφ = J) may well be different for another frame.

Another problem in dealing with density wave models is the fact they are  mainly  based  on the mode chosen for particular dynamical  wave equations  that  can be applied to the fluid framework. (Note: A "mode" is a standing wave that can be supported by a disk of given dimensions, mass.) More broadly, most astronomers who work in this narrow specialist area use the term interchangeably with Fourier m-component. (And it should be understood here that one of the main tools is Fourier analysis of the waves, but alas Fourier analysis is only taught usually to those who take advanced Calculus or analysis courses).

As an example, a particular Fourier coefficient, call it an, applicable to a wave - may be defined:

where m is the Fourier m-component.

What types of modes can one have in these models? One is the "global" or m= 1 mode. Then there are the unstable (m= 2) modes.

Whether one mode or another appears (or is used in a spiral galaxy modeling) is critical since it may well determine at what stage a barred spiral develops, if at all. Alas, another complexity enters here since mode analysis is not simply a stand alone but also incorporates a subtle aspect called "marginal stability analysis" wherein one will solve for a quantity Q and if it is very close to 1 one has the case of marginal stability and tightly wound modes or in the case of spirals, around the Sa class. The trouble is that when one seriously incorporates any heating of the disk for whatever reason (say a massive central black hole sucking up matter and generating much radiation) then the desired values of Q are soon out of range, making it impossible for a given spiral structure to sustain itself.

Lastly, whenever one considers density waves in galaxies, it's important to bear in mind there remain enormous stumbling blocks even when applied to the simplest models of galactic disks (e.g. "zero thickness" disks). One of these arises from potential theory. Thus, the perturbed gravitational field at one location depends on the density perturbation at every other location. How will you know, ab initio, that the density perturbation at location r, φ, z say, does not accelerate the associated wave (in the fluid rest frame) to a higher velocity than any stars at the same or near location? You don't unless you investigate! What does it mean to "investigate"? It means a full bore mathematical modeling procedure to locate where all the  Lindblad orbital resonances are, since these can speed up the star. (We also want to know where the Landau damping regions are, which can impose a retardation of the waves.)
In short, what I've shown is that density wave analysis as applied to galaxies is a field almost to itself in terms of being amenable to general understanding. And complexity is often compounded because the mere posing of a question to do with a particular spiral galaxy's form almost always introduces a number of tacit assumptions that may not be applicable at all. This, of course, is the difficulty when dealing in generalities, as opposed to specific cases, examples.