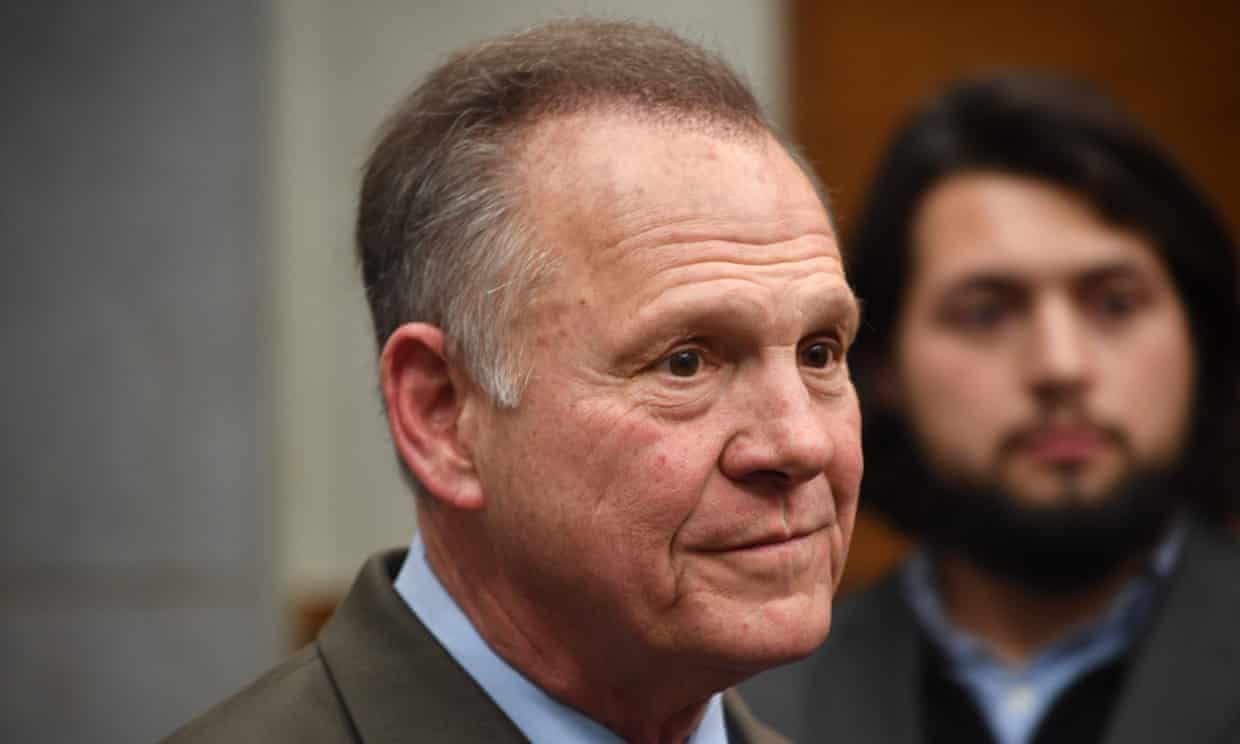 Child sex predator Roy Moore after his apparent defeat last night. He refuses to concede to Doug Jones, perhaps because he expects thousands of provisional ballots to be thrown out.

The Alabama special election results are now (seemingly)  in the history books, and  moderate Dem Doug Jones appears to have defeated the child rapist Reeptard Roy Moore,  by 49.0 to 48.3 with 99% of precincts reporting.  The vote difference numerically is 21, 300.  At Jones’ election night party hundreds of supporters, many waving signs, erupted in cheers at a hotel ballroom in Birmingham when, on giant TV screens, CNN declared the race for the Democrat. There were hugs, smiles, tears and chants of “We want Doug!” The raw emotion was evident. 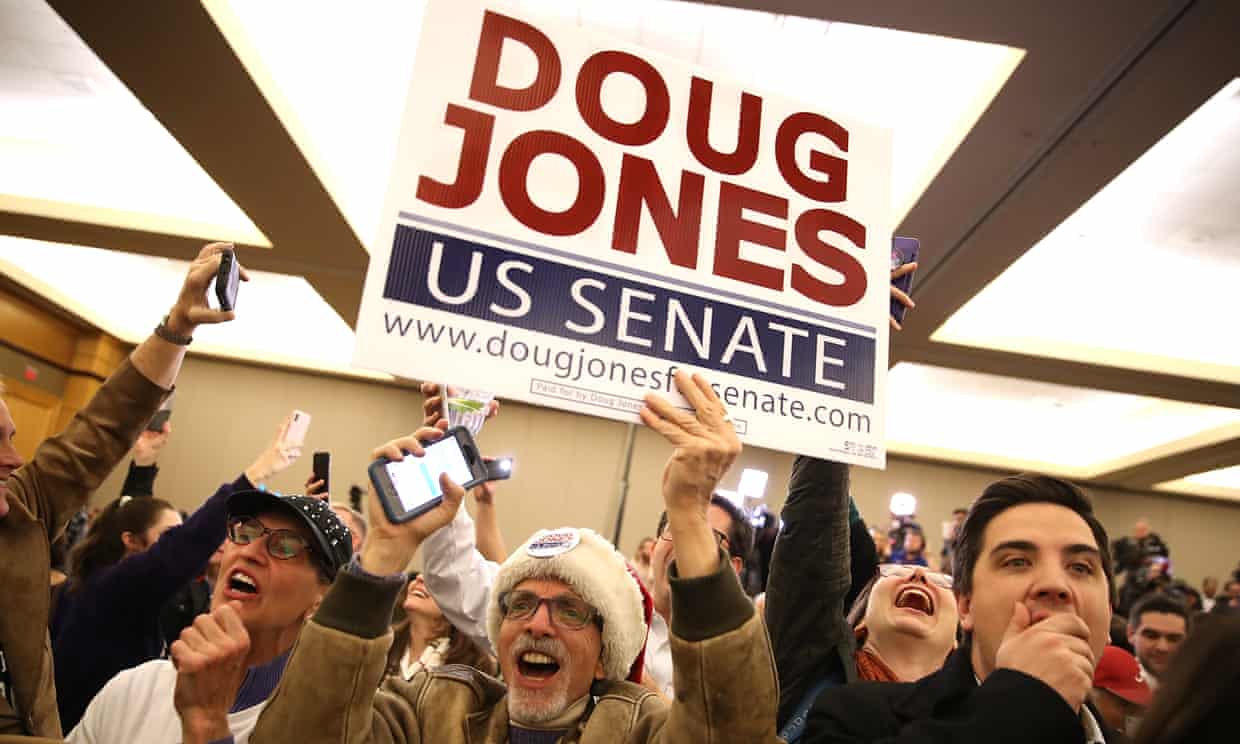 If one tuned into left-leaning MSNBC one could sense the jubilation  after NBC called Doug Jones the "apparent winner". Also that Trump and Bannon had taken a hit, and Alabama - long regarded as a backward hinterland full of inbred crackers - had finally stepped into the 21st century. Also it had avoided a big scarlet letter had it elected a slime ball like Moore into Senate  - which had even days earlier sent chills down the spines of young Senate pages.

But all this may well be premature, because it may not be over yet. Moore has not conceded and if one tuned to "Trump TV" - home of assholes like Sean Hannity, Jeanine Pirro and Tucker Carlson- one could see why. On the air at about 10:05 p.m. MST was the Alabama officer of elections who warned all and sundry to basically chill out. He pointed out to the Fox anchor that "thousands of provisional ballots and write in ballots" still had to be certified and this wouldn't be done until December 26th at the earliest and January 3rd at the latest.

The election officer emphasized that there is no final count yet and there can't be until certification. Also,  he would be rigorously adopting the state statute 17.16.20 in the examination of the provisional and write -in ballots. We can therefore expect, from his tone, that if any t's aren't crossed or i's dotted those votes will end up in the dustbin.

I suspect that nearly all the provisional ballots would have been cast by African-American voters who reached a whopping 30 percent turnout in the state - the highest since Obama's 2008 election.  In all African Americans went 96% for Jones, and whites barely 30 %.   In other words, nearly 7 in 10 white Alabamans remained diehard, red crackers on the side of Moore and Trump.  This is why we shouldn't listen too much to breathless pundits who claim Alabama has undergone a major post- segregation, post - George Wallace transition.

As for the huge number of African -American votes which put Jones over the top, the problem with these ballots is almost certainly going to be whether valid IDs were available or not.  Also whether adequate information was provided at the time the ballot was submitted. As we have seen before with other elections, i.e. Ohio in the 2004 general election, provisional ballot status almost always enters when an ID isn't available or presented.   Also, many OH provisional ballots were dismissed because of names or addresses not being verifiable with existing voters' lists. This means the potential exists for thousands of provisional Alabama ballots to be disqualified.

This could reduce the margin of Doug Jones' victory to below the current 1.6  percent.  At the critical 0.5 percent difference an automatic recount would be triggered, according to the AL election officer. Even if the margin should somehow reduce to one percent, Moore could call for a recount.

So clearly this is why Moore isn't conceding. He also may well put his faith in the officials tallying and certifying ballots, believe they will dump all the provisional ballots  - or most. Thereby likely swinging the election back his way. It could happen!

Let's go back to the matter of the provisional ballots and how so many thousands might have originated. We do know white racists in the state had set up a voter suppression system to keep African -American voters at bay. .In 2011, these bigots passed a photo ID law, ostensibly to combat voter fraud, i.e. via voter impersonation.. But “voter impersonation” at polling places virtually never happens.

As I noted in a post earlier this year,  this is a Macguffin.  The Brennan Center for Justice at NYU Law conducted extensive research on all this and subsequently released a report that looked at a previously conducted national study. The latter looked at the non-citizen and potential fraudulent voting in the 2016 election. Their final conclusion?

"From the tabulation of 23.5 million votes there were  only 30 incidents of suspected noncitizen voting referred for further inquiries or prosecution. Thus, improper noncitizen votes accounted for 0.0001 percent."

So the ungodly truth is that these racist Alabama vermin wanted to keep black and Latino voters away from the ballot box, to prevent a Jones' win. We know this because they’ve always been clear about their intentions.
.
The bill’s sponsors were even caught on tape devising a plan to depress the turnout of black voters — whom they called “aborigines” and “illiterates” who would ride “H.U.D.-financed buses” to the polls — in the 2010 midterm election by keeping a gambling referendum off the ballot. Gambling is popular among black voters in Alabama, so they thought if it had remained on the ballot, black voters would show up to vote in droves.

One state senator had tried for over a decade to get the bill into law, and told The Huntsville Times that a photo ID law would undermine Alabama’s “black power structure.” In The Montgomery Advertiser, he said that the absence of an ID law “benefits black elected leaders.”  In other words, creation of such a bogus law would stymie them and also limit any expression of black voter will.

Of course, many sympathetic with these cracker racists, often make light of voter I.D. laws with the egregious response: "What's the big deal? Everyone has to get an I.D. anyway to drive or to even travel on airlines? If you don't have an I.D. it must be because you're either too dumb to get one or you're a terrorist!"  Which is clearly poppycock.

Photo ID laws may seem innocuous to most American whities, but they are often onerous for many minorities in the populace .  While it might be easy for a typical middle class white to take a few hours off from work, drive to the nearest department of motor vehicles office, wait in line, take some tests, hand over $40 and leave with a driver’s license or plain ID, it isn't a gimme for many others. It often requires resources that many rural, low-income people- especially minorities -  simply do not have.

This is relevant to the overwhelming African-American vote for Doug Jones in the Yellowhammer State. While heavy African-American turnout on Jones’s behalf overcame Moore’s margins in rural, predominantly white parts of Alabama, this might all be for naught, if a good chunk are tossed out because of being invalid - due to lack of photo IDs.


Photo ID laws, let's be clear,  are written to make it difficult for the poorest people - often elderly African-Americans-  to vote.  Many, indeed, lack formal birth certificates or even marriage certificates, which are generally essential to obtain a photo I.D. - say from one's local Department of Motor Vehicles. (DMV).  A study by Zoltan Hajnal, a political scientist at the University of California, San Diego, comparing the 2012 and 2016 presidential elections, found that the Alabama  voter ID law kept black voters from the polls. After Alabama implemented its strict voter ID law, turnout in its most racially diverse counties declined by almost 5 percentage points, which is even more than the drop in diverse counties in other states.

The study controlled for numerous factors that might otherwise have affected an election: how much money was spent on the races; the state’s partisan makeup; changes in electoral laws like early voting and day-of registration; and shifts in incentives to vote, like which party controls the state legislature.

In Alabama, an estimated 118,000 registered voters do not have a photo ID they can use to cast an acceptable vote. Black and Latino voters are nearly twice as likely as white voters to lack such documentation. In other words, Alabama’s  photo ID law is nothing but a naked attempt to suppress the voting rights of people of color.  While blacks did come out in their numbers for Jones yesterday, it remains to be seen how many ballots (especially provisional) actually are certified as votes.

Let's say 21, 300 votes currently separate Jones and Moore's totals, and that 30 percent of those 118,000 registered black voters came out to try to cast ballots exclusively for Jones. That is 35, 400 votes.  But imagine that only 10, 000 of these ballots end up certified because the others lacked a photo ID or other ancillary validation. That would mean  a total of 25, 400 votes wiped out for Jones, or more than enough to eliminate Jones' current vote advantage  and giving Moore a 4, 100 vote lead- - and the presumptive win.

It is more than likely this scenario is what Moore invoked when he said last night: "I ain't conceding. Let's just wait and let this process play out and have faith in God".

Hmmm... have faith in God or the Alabama state office of  elections to overturn Jones' win.

Bottom line: Buckle up and hold your breath as the state certification process plays out. Also, that it may deliberately take longer than the new Senator (if Jones) can be installed - to ensure a Repuke tax victory.

Finally, let's note that even in the event Jones' win is preserved, it's only for two years - since that was the balance of Jeff Sessions' term - once he left to be appointed Attorney General.

Posted by Copernicus at 9:07 AM