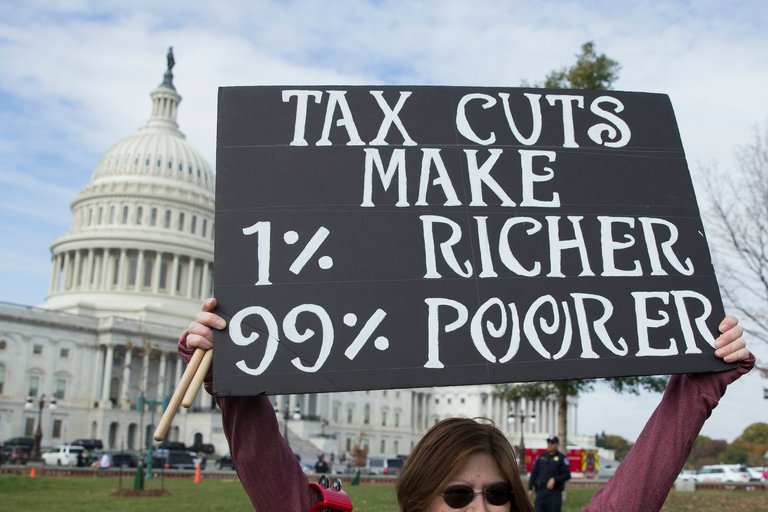 Earlier yesterday, as is usual for the dolt masquerading as a president in the White House, he engaged in another snake oil salesman performance.  This time appearing before a stack of thousands of tax pages and cutting the phony yards of red tape  (actually a ribbon) while aping a Barbary ape.

He then bellowed: "I wanna give the American people a really biiiiiiigg tax cut for a Christmas present."   He couldn't help grinning like a shit-eating Cheshire cat - probably just antsy to get back to his 10 hour a day cable TV -watching. (He reportedly hides when any WH visitors pass by the TV room where he's glued to FOX  on a 60" set- - since he doesn't want them to see him doing nothing.)

But I will make this clear again, as an American who understands something of the nation's financial issues, and its already exploding debt, I want no part of Dotard's tax cut gift.  It is literally a gift of "chocolates" all laced with arsenic.  The so called GOP tax cuts are just a straight gimmick to give more to the richest who don't need (and already admitted they will not create more jobs) and provide an excuse to implement massive social spending cuts under 'pay-go' when the deficits explode in the next year or two as they surely will.

These "tax cuts" Donnie Dope sees as a "gift" amount to perhaps $450 all told for wifey and me. And yeah, that lump of dough would make a nice little gift - IF there were no downsides or strings attached.  But that isn't true. Getting that dough would subsequently mean suffering spending cuts to my Medicare much much greater than the value of the tax cut.

Meanwhile. Donnie Dotard and the pukes are betting you won't grasp that with inflation still low the value of any new debt taken on will remain high.   Also, that any marginal gains in economic growth are purchased at the cost of raising our debt to 99 per cent of the GDP.  That means the pukes and Dotard know full well revenue won't outpace spending anytime soon -including $700b  they want for more defense in the next fiscal year. In effect, the only way these rats can even halfway claim their phony bill will work is by: a) putting a "sunset" provision on most middle class tax cuts, and b) savaging the social safety net to pay for giving the rich and the corps. money they don't need.

By all rights and standards, raging citizens ought to be burning them in effigy right now - and protesting in front of their stupid homes.

As I examined the CMS Summary sheets 6 weeks ago for the procedures carried out this past year I noted a total of more than $60,000 for the 3D staging biopsy and cryotherapy cancer treatment at UCHealth.  The ultrasound guidance part of the cryo treatment alone came in at $16,000 and the anesthesia just for that treatment, not including the 3D biopsy anesthesia, was $3,149..

If I had to operate under a $20,000 per annum GOP voucher plan- say implemented under a pay-go cut to Medicare- I'd have ended up shelling out nearly $40,000 out of pocket for the uncovered procedures. And none of that even includes the cost for wife's hip replacement surgery, including 7 days in rehab.. By contrast, the estimated "payoff" I\we can expect in tax cuts from the proposed GOP tax reform is about  $450.

Do the math and compare that chump change promised as a Xmas "gift" by Donnie Dotard with the $40,000 cited earlier and you will see why I'd rather pay the taxes - any day, twice on Sunday - just like our European friends are happy to do. Given they know which side their economic bread is buttered on, and it ain't the tax cuts side!

My trepidation is reinforced by that of economist Bruce Bartlett who pointed out one month ago ('Last Word') that once the tax reform plan itself passes the stage is set for worse. This is because the next step will be reconciliation with the budget that has already passed.Why is this an atrocity? Because the budget the Republicans passed to increase the deficit by $1.5 trillion , in Bartlett's words: "also contains 4 trillion dollars in cuts to Social Security and Medicare".

Thus a BIG part of what's paying for this egregious tax cut are future spending cuts to the most needed safety nets, including Medicaid as well.  Bartlett also sought to alert viewers that once this perfidy passes, the  worst is still to come. In his words:

"The Congressional Budget Office pointed out yesterday that because of existing law called 'pay go' automatic spending cuts will take place the minute this legislation takes effect and $25 billion will be cut out of Medicare in fiscal 2018  and for many years to come - and that's already in law."

We also expect some of these cuts to Medicare will be indirect, in the form of cuts to  physicians' reimbursement by the Center for Medicare and Medicaid Services.  This means many Medicare beneficiaries  will no longer be able to get medical access because doctors will no longer accept them. As it is, millions of Medicare recipients have to do arduous searches to find providers because Medicare doesn't reimburse at private insurance rates. It also lays the ground for the implementation of a voucher system.

Apart from the other vile aspects of this REPUKE excrement, it's little wonder two thirds of  the nation is against it. They know they will be robbed by the pukes to pay for this damned thing when it goes south in deficits - as it will. So NO, spare us the Christmas "gift"!