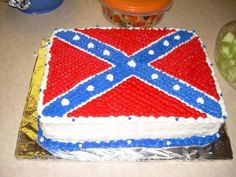 The Confederate flag birthday cake some bloggers don't believe I'd make for them. They're wrong. I'd do it for $400 a cake!

It appears some Reich wing bloggers are thoroughly exercised over the Colorado case now before the Supreme Court.  The case involves a religious Colorado baker who refused to do work for a gay couple who were getting married.  At issue is whether Jack Phillips, owner of Masterpiece Cakeshop in Lakewood, had the legal right to turn away fiancés Charlie Craig and David Mullins when they asked him to bake a wedding cake in 2012.  Phillips, a strict religionist,  contended his cakes were art and that doing a "gay cake"  would defile that art and so  violate his Christian values .

The blogger to whom I refer was incensed that the Supremes might allow that Jack Phillips was in the wrong when he refused to "perform his service for the two homos".  I suspect our friend is not aware that one doesn't use that pejorative these days, but anyway....

He made the further rash claim that he'd never expect the ACLU to defend him if he was turned down by an Atheist cake maker - say to make a cake extolling the Ten Commandments. He's flat wrong as the ACLU has always taken such cases, acknowledging that citizen rights can be trampled on the Left or Right side of the national divide.

Further, he doubted that if he went to an atheist or liberal cake maker he'd be able to get a Confederate battle flag cake made. In that he is again making an erroneous assumption. No atheist I know (including yours truly - if I was into making cakes) would turn down his request.

Heck, he could have a Confederate cake such as depicted above for a mere 400 bucks. Same thing with ANY wedding cake he'd want, including one featuring the Ten Commandments.

Now, as you will note, there is likely NO way in hell that our friend would pay that much for a cake - even a Rebel cake or highly religious one. But that is precisely my point as it pertains to the Masterpiece Cakeshop case. Phillips could have avoided all the kerfuffle and loss of business after  the state Civil Rights Commission declared Phillips' business practices discriminatory by simply charging more for the cake.  Say, $500.  This might break down along the lines of: $150 (cake, decorations, including creative design) and $350 (mental strain during creation. i.e. from going against one's pet beliefs).

The point being there's a  rational basis for the higher price which would be difficult to refute or invalidate in a law court (see end notes from Markham Law). After all, the guy IS performing the service- and selling, just at a somewhat higher cost to make it worth his mental-emotional investment.

It would then redound to them to go to seek a more economic cake choice elsewhere. The business -commercial law sphere would have remained intact, and also the "free speech" - rights issue, now expressed in terms of setting a higher price for the creative "self expression." That may be intangible but he (as an artist) has as much right to put his own price on it as a paint artist does his portrait.

This is no different, imho, in our currently getting bids (from Task Easy) to do a fall cleanup - which we can no longer do because of health (back) issues. While Task Easy claims $120 for a "package" deal - the first (and only) contractor who arrived wanted double that!  We said absolutely not. That was OUR choice, and HIS choice was to move on and look elsewhere for paid contract work.

Thus, the "freedom" issue is easily resolved and in a businesslike as opposed to ideological way.  The key is that creators or contractors can charge whatever they want for a service, but the customer is also at liberty to turn them down - if the price isn't right.

Our  conservative blogger friend also tried to use the argument that Phillips was perfectly willing to "bake the homos any other cake" e.g. birthday or what not. But he still misses the point. Once you enter into the for profit commercial trade domain you agree to provide the services - the same services - you provide to all other customers. Hence, if you bake other customers wedding cakes you cannot make an exception for "homos". It's quite simple.

The argument might be made that if I or anyone jacked up the cost of a cake for an ideology or person we don't fancy that is "discriminatory pricing".  Well, tell that to the contractor who wanted to charge $240 to clear some leaves out of our yard! I simply don't buy it would hold that much legal water, certainly not to the level of the federal case Masterpiece Cakeshop faces now.

In other words, I'd take a "discriminatory" pricing case any day before having to deal with an outright, refusal of service,  discrimination of civil rights case.

Price Discrimination Is Often Lawful. Presumptively, a seller is entitled to set prices as he chooses when dealing with his different customers. Most sellers would resent any effort to restrict their discretion to set and vary their prices for different sales. In market economies such as our own, firms decide for themselves what to charge for their products and to whom they wish to make sales. It is contrary to the fundamental principles of market economics to regulate what sellers charge for their products or impose a rule that they cannot vary their prices for the same goods when selling them to different customers.

Unlawful Price Discrimination, Defined. Stated as a rule, price discrimination becomes unlawful under federal antitrust law only when it threatens to undermine competitive processes in an affected market and otherwise meets the specific criteria of the federal price discrimination statutes (viz., the simultaneous, ongoing sale of the same or similar products to commercial customers at different prices in transactions that implicate interstate commerce).