On Sol Invictus, Mithras And The Origin Of Christmas 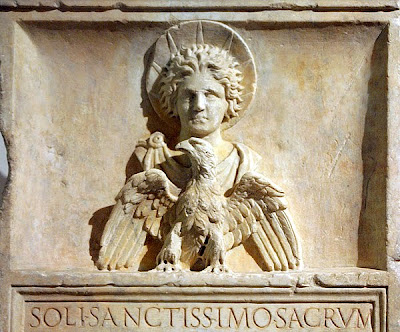 The Roman Sol Invictus image bearing the inscription: "The most holy and sacred Sun"

As par for the course in our culturally and socially divided country, much hullaballoo is made every year over the celebration of Christmas, using the words "Merry Christmas" and the possibility those nasty atheists and secularists are trying to "destroy" the holiday. Very seldom do any inquiring minds chill out long enough to investigate the actual origins of the holiday - which dates back to antiquity.

Coincidentally, this is also the earliest reference to December 25 as the birthday of Jesus. In a commemoration of Christian martyrs, the notation for VIII Kal. Jan. is natus Christus in Betleem Judeae ("Christ was born in Bethlehem of Judea"). Because the Depositio Martyrum was completed in AD 336, the first celebration of Christmas can be dated to that year as well. In the list of consuls, there also is the note: "Dominus Iesus Christus natus est VIII kal. Ian".

Note that although the first celebration can be dated to the year 336, it was not formalized! As I noted in a post from December, 2011, the formalization wasn't until 29 years after the Council of Nicaea, in 354 A.D. Then the newly liberated Christians formally claimed December 25th - the designated original birth date of the Sun god Mithras - as their own nativity for Christ. This exactly parallels the timing already in the Chronography of AD 354 where, in the part known as the Philocalian Calendar,  the date first emerges in a written record.  We see then a confluence between Christ,  Sol Invictus (the Roman Sun god) and Mithras.

Regarding Mithras' birth date (also on Dec. 25th), one should note that just as Jesus' date of birth was ahistorical, Mithras' was as well. The assignment of ancient god-man births to this date is understandable given the ancients investment in agriculture, and the Winter solstice marked the day of shortest daylight giving way to increasing lengths of day through Spring. (See my earlier post on the Winter solstice.)

Some who complain about Mithraism in general insist there's no evidence that Mithras was a great teacher. But this is belied in Ized 28. (We were introduced to this in our Comparative Religion class at Loyola, in 1966). In brief passages we see Mithras teaching the multitudes about son-ship and stewardship and the Logos-Trinity.  One trope used to try to demean the import of Mithras as an ancient god Man is that he was said to have "been born of a solid rock".  Hence, is worthy of belittlement.

The notion of Mithras being "born of a solid rock" can probably be traced to certain writings of early Church Father Justin Martyr, who analogized Peter as the mystic "Rock" of the Church ("Thou art Peter, and upon this Rock I will build my Church") and to the emergence of Mithraism with Mithras. Researcher J.M. Robertson ('The Origin Of Mithraic Mysteries: Cosmology and Salvation in the Ancient World') speculates that Martyr's ruminations are "in touch with the Graecized but probably Semitic myth of the Rock-born Agdestis, son of Jupiter".

In other words, not peculiar to Mithraism proper, but a subsequent syncretic addition which then became distorted into a "rock birth" by early Christians. Not surprisingly, probably because of the Agdestis- connection, Mithras is derived from the Latin "rock born" and that concept has been perpetuated with the name.

A number of ancient authors (e.g. Porphyry) bemoaned the catastrophic destruction of many of the original works at the hands of the Christians.  Nonetheless, we do have enough in Ized 28 of the Zendavesta to document much of Mithras' mythological basis. Perusing through it there is no mention of battling a "bull" - which likely originated from the Graeco-Roman version of the myth, which was probably distorted by re-translations over centuries (much the same way the Christian New Testament has been).

In the actual Izeds (#23- #28) there’s no record of any “Bull”. There is a peripheral reference (by Porphyry) to Mithras as "the Bull of Demiurgos and lord of generation". But again, no "battle" with such. (so it's likely corrupted over time). Robertson (p. 121) speculates Porphyry's reference is actually based on a conceptual error mixing up the Mithraic seat at the equinoctial table (assigned to the Ram, Aries) "which also bears the sword of the Ram." He adds (ibid.): "The sword of the Ram is simply figured as a cross, since the sword IS a cross".

A much older version, probably more accurate,  is cited in Robertson's 'Pagan Christs' (p. 119) wherein he notes that according to a (Vendedadic) legend "Mithras shoots an arrow at a rock, and water gushes forth where the arrow strikes". The passage is believed by some scholars of pagan mystery religions to refer to either an incident where Mithras saves his followers who are lost in the desert, or that he uses his arrow to reveal an analog to the Judaeo-Christian Decalogue.

Aspects of Mithraism that later filtered into the Graeco-Roman world (in the form of emergent Mithraic cults) undoubtedly came from this text (the Izeds, wherein “Mithras” was chief and ruler) as well as others likely destroyed with the burning of the library at Alexandria. (See, e.g. J.M. Robertson’s ‘Pagan Christs’, 1966) . Many scholars believe the greater details including Mithras’ disciples, the full recounting of his miracles: including walking on water, raising the dead, changing water to wine etc. were in those destroyed manuscripts.

According to Plutarch, Mithraism first arrived in the Roman Empire through the Cilician pirates whom Pompey subdued, then brought back to Rome as slaves. (Many were actually believed to have been soldiers for whom Mithraism would have been the religion naturally embraced).

Mithraism was a mystery religion, so its historical legends would have always been more accessible than its precepts. Rituals were held in strictest confidence – available only to the select few - as a secret society would. (Much like today’s Free Masons who maintain absolute silence as regards their rituals.) As Frank Zindler notes, "no specific works of Mithraism are known since like other Mystery Cults, it centered around a secret or body of secrets only known to those initiated into the rites. Most of our knowledge of it is derived from the iconography of its temples”.

Another common canard is that Mithraists copied from Christians to fabricate their god -Man not the other way around. This is totally false, and can be ascertained from Tertullian’s writings combined with just minimal reasoning ability. My class notes, e.g. from my Comparative Theology course,  are fortunately still in one of my old file boxes with Exegesis notes. The main theme, to summarize, is that the course was based on the original writings of Church fathers, including Tertullian, Justin Martyr and Julius Firmicus – all referencing Mithraic scriptures and references therein.

After describing the “Lord’s Supper’ for example, Justin Martyr evinces outrage as he writes (from my notes):

As the notes indicate, a careless Christian reader might jump to the conclusion that the Mithraists copied from the Christians, but this simply isn’t so, on closer examination. The refutation of this notion inheres in the language of the same trio of Christian Fathers. They all speak, for example, of resemblance of Mithraic rites to Christian rites as being “the imitation of devils”.

But why such an obscure use of language, when they could simply have stated the Mithraists IMITATED their own works, and done? Why the need to introduce devils? This presumes a supernatural influence over and above ordinary human copying.

An answer becomes manifest when we examine more closely the words of Justin Martyr, who expressly argued that "the demons ANTICIPATED the Christian mysteries and prepared PARODIES of them BEFOREHAND"! (Pagan Christs, p. 118).

"When I hear that Mithra was begotten of a virgin, I understand that the deceiving serpent also counterfeited this!"

(Addendum in Comparative Theology notes: No one pretends the Pagan virgin myth in general is LATER than Christianity. Justin’s own words: "ANTICIPATED the Christian mysteries" can mean only one thing: he KNEW the Mithraic version PRECEDED the Christian version. What he said also underscored the arguments from Tertullian and Firmicus. He was so incensed that the Mithraists trumped the Christians' Savior myth on the timeline, that he attributed this to demonic work, aka the "imitation of devils".)

The takeaway here? Celebrate Christmas by all means, but bear in mind it is actually the celebration of the birth of Mithras-Sol Invictus and the date itself is consistent with that of the winter solstice - or the "rebirth of the Sun".   Christians later copied this ancient pagan template for the nativity of their own god-Man, Jesus.
Posted by Copernicus at 10:57 AM