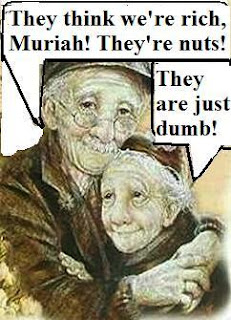 In the press the past few months one read regular, breathless accounts of how seniors were due - for the first time in nearly five years - a 2 percent increase in the Social Security cost of living allowance.  We both looked forward with great eagerness to this increase since, of course, the cost of living is going through the roof. Our home insurance alone has increased more than 70 percent the past two years, and the car insurance nearly 40 percent. So any real increase in Social Security payments would be welcome.

Thus it was I tore open the letter from the Social Security Administration yesterday afternoon, announcing with the first sentence of the first paragraph:

Your Social Security benefits will increase by 2.0 percent in 2018 because of a rise in the cost of living.

B- The amount we deduct for Medicare medical insurance is Y  +  0.02 X

In other words, after the Medicare deduction there is no COLA!

Now before anyone starts the ridiculous thought process that I'm getting really cheap medical care, think again.  In Medicare, we all have to get an additional supplement plan (usually called "Plan F") which covers the balance of costs that Medicare doesn't, such as for specialized cancer treatments like my focal cryotherapy, or having a precancerous lesion removed from my back in May.  That cost for me has currently increased from $220 a month to $228 (as per a recent advisory letter from the insurer).

We also have to cover the costs of the Part D drug plan premium plus the cost of med copays. In addition, Medicare covers nothing for eyeglasses or dental care, which in the past two months has cost me:  $460 (eye exam, newly corrected glasses) and  $1,450, respectively (a crown, a filling and two periodontal cleanings). So don't anyone hand me any BS that I am getting an "entitlement".

What could make the COLA landscape much worse for seniors? Implementing a chained CPI, such as buried in the Senate version of the Repuke tax bill.  The brainchild of billionaire Peter G. Peterson,  the chained CPI reckons inflation (and hence adjustments) at barely one third of the regular COLA - based on the standard CPI or Consumer Price Index. Thus, most seniors in the country will find themselves either malnourished  or in the poorhouse after five years.

The use of the "chained CPI" assumes that as prices increase, consumers will buy lower cost alternatives, reducing the amount of inflation they experience via less costly choices. For example, if the price of stew beef or hamburger rises by 50 cents a pound, they'll opt for pork.  If pork prices increase by 50 cents a pound (say owing to the Chinese buying tons of corn meal for their own hogs) then consumers will move to chicken. If chicken prices rise too much they will move to cheap fish or canned tuna. If those prices rise too much....well, I guess there's always dumpster diving (Repubs have already cut the food stamp budget to the bone.)

Basically then, the chained CPI introduces a race to the bottom.

Look, I hesitate to employ charged words like "evil" to describe the chained CPI so let's call it barbarous. It is barbarous (and cynical) because it invokes the discredited concept of "Pareto efficiency". In so doing it regards the dollars of the wealthy and affluent as having more "utility" than the dollars of fixed income seniors, or the poor. This is why former Fed Chairman Alan Greenspan went on record in an appearance before the Senate Banking Committee (in 2003) to assert that "Social Security benefits need to be cut to pay for Bush’s tax cuts."

Was Greenspan mad or just your garden variety econ psycho? No, just  a victim of Pareto think, like too many ivory tower economists (e.g. Martin Feldstein). Social Security payments, especially with COLAs, did everything the Fed Chairman didn’t want. They poured more money into the economy, but not via productive labor or market indices, stock returns. S.S. beneficiaries  receive their monthly checks merely by existing and breathing day to day, and having paid into the system with FICA deductions. Even then, they receive far more in benefits than actually paid in, making a total mess of "utils" earned.

Thus, in considering any option of whether to give more relief to fixed income seniors or the wealthy- who may use it to buy yachts, $2 million 'Billy the Kid' tintypes, 50 Lamborghinis or blood diamonds, it's always better to give the money to the latter while letting the former suck salt, or pound sand.

Let's also note that the S.S. COLAs increase the non-productive payments each year, one reason why – back in 1997 – Greenspan demanded an artificially much lower COLA increase than had originally been proposed. (And which certainly doesn’t reflect seniors’ increased costs for medical treatments and prescription drugs).

That was never accepted, but the latest twist - to raise the monthly amount of the Medicare premium by exactly the same amount as the putative COLA, accomplishes something even better: it de facto wipes out ANY COLA increase. This, while making the less-mathematically inclined actually believe they're getting a real COLA increase.

What sleight of hand!