Skewering The Myth Of "Red State" Dominance of the USA This post seeks to skewer the canard that the U.S. is dominated by "Red" state radical rightists, and that - oh Lordy- woe betide us if it comes to a new Civil War. We in blue regions would be overrun by the "Reds" and slaughtered. Dream on, Trumpies! Once the political map is viewed without the outlandish distortions of gerrymandering congressional districts, it becomes clear that red and blue regions are nearly equally distributed along with independents.

The Red dominance in the usual political (gerrymandered) maps are thus illusions and once rational district boundaries are imposed .e.g using computer redraws) it gives  way to almost equally weighted red and blue regions and also much more moderate ones. In other words, any new "Civil War" would be fought on an almost even battlefield - but with urban (blue state) areas featuring way more techies and brains, they'd likely see the Red states submit in a week or less. It would not be like the War of Rebellion over 1861-65.  Heck, all we'd have to do is release hundreds of "vomit" weapons to reduce these latter day Johnny Rebs to puking putzes, e.g

These included a new breed of electro-magnetic weapons especially using high frequency radio signals (cf. The Economist, Oct. 15, 2011, p. 89, 'Electromagnetic Weapons: Frying Tonight'). The simplest one, and perhaps least destructive physically, emits RF (radiofrequency) radiation that directly affects the human digestive system and nervous system to trigger violent vomiting. It is estimated that one brief "spray" by such an RF device could have 99% of a violently agitating crowd reduced to paroxysms of non-stop vomiting within seconds.  So if the Reds want a new war we can give them one.


Anyway, back to gerrymandering. The word “gerrymander” comes from an 1812 political cartoon drawn to parody Massachusetts Gov. Elbridge Gerry’s re-drawn Senate districts. The cartoon depicts one of the bizarrely shaped districts in the contorted form of a fork-tongued salamander. Since 1812, gerrymandering has been increasingly used as a tool to divide and distort the electorate. More often than not, state legislatures are tasked with drawing district maps, allowing the electoral foxes to draw and defend their henhouse districts. While no party is innocent when it comes to gerrymandering, a Washington Post analysis in 2014 found that eight of the 10 most gerrymandered districts in the United States were drawn by Republicans.

As an example, look at this farce of  a NC district for god's sake! 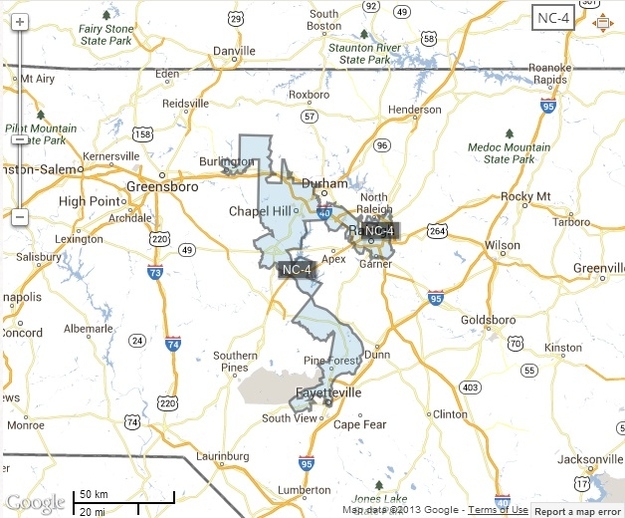 Why extend the skinny region down, down, down to look like the profile of an anorexic woman or concentration camp survivor? Well, in order to be able to grab as many Repuke voters as possible in all the "pockets" they inhabit.


Playing games with district boundaries obviously has catastrophic impacts on democracy. Thus, if a bunch of Repubs redraws lines in a state to resemble something like this,

In order to collect all the Republican voting locations and exclude Democrats, then you know damned well something fishy is going on.  There is NO rational reason why any congressional district map (blue or red) should look like a psychotic's sketch. None.

Irrationally redrawn districts like the one above or the one in NC then result in other geographical zones - leaving out Latinos or minorities, for example, that become uncompetitive - either there aren't enough voting members of one party or the other, OR there are too many non-voters.

In addition, the result of such deliberate irrationally -drawn districts means there is absolutely no incentive to compromise. Ever. In fact, there is a strong disincentive to collaboration, because working across the aisle almost certainly means the risk of a primary challenge from the far right or far left of the party. For the overwhelming majority of congressional representatives, there is no real risk to losing a general election — but there is a very real threat of losing a fiercely contested primary election. Over time, this causes sane people to pursue insane pandering and extreme positions. It is a key, but often overlooked, source of contemporary gridlock and endless bickering.

More critically, gerrymandering also disempowers and distorts citizen votes leading to decreased turnout and a sense of powerlessness. To fix ideas,  in 2010, droves of Tea baggers eager to have their voices heard quickly realized that their own representative was either a solidly liberal Democrat in an overwhelmingly blue district or a solidly conservative Republican in an overwhelmingly red district. Those Tea baggers learned they got a deaf ear from their representatives, either because the district was already securely red or securely blue - hence no further input was needed. This is also why those living in "red" districts like Janice and me, can't get our rep (Doug Lamborn) to hold town hall meets. He knows he doesn't have to so we are left to put up card board cutouts and then ask mock questions and give mock answers imitating what Doug Lamebrain might provide.

Fortunately, fixing gerrymandering is getting easier. Given the right parameters, computer models can fairly apportion citizens into districts that are diverse, competitive and geographically sensible — ensuring that minorities are not used as pawns in a national political game. These efforts can be bolstered by stripping district drawing powers from partisan legislators and putting them into the hands of citizen-led commissions that are comprised by an equal number of Democratic- and Republican-leaning voters. Partisan politics is to be exercised within the districts, not during their formation. But gerrymandering intensifies every decade regardless, because it’s not a politically “sexy” issue. When’s the last time you saw a march against skewed districting?

But unless we citizens cease being blasé about what is politically 'sexy' we will find our voting system hopelessly skewed  to reflect only the party (e.g. Repukes currently) that can play the most gerrymandering games. . Bear in mind that what truly differentiates democracy from despotism is political competition. The longer we allow our districts to be hijacked to be irrationally redrawn for political benefit the further we gravitate away from the founding ideals of our republic. And the faster we move toward fascism or autocracy.
Posted by Copernicus at 9:45 PM