Did A Dark Matter -Generated Comet Kill The Dinosaurs? Unlikely!

Another dark matter-incepted cataclysm as conjectured by Michael Rampino of NYU.

The origin of  the Chicxulub  impact event that eliminated the dinosaurs 65 million years ago, originally based on the work of Luis Alvarez,  has once again come up for review with a novel speculation composed as a self-consistent model. This is compliments of Harvard astrophysicists Lisa Randall  and Matthew Reece, based on their exotic conjecture that a new form of dark matter (in combination with regular matter) exists in a thin disk at the mid-plane of our galaxy. And under the right confluence of conditions 65 million years ago,  this "combo" disk triggered a comet's crashing into the Earth to create the Chicxulub  impact .  Their conjecture is presented at a popular level in Randall's book, 'Dark Matter and the Dinosaurs'.

Their hypothesis (I am not going to call it a theory yet) claims the Earth transits this disk at regular intervals (oscillating above and below the galactic equator) while revolving about the galactic center.  The varying gravitational force arising from these oscillations could then be enough to perturb comets (planet killer or slightly less on the Torino scale) and send them hurtling toward Earth. (Their dark matter model purports to show a 32 million year (Myr) cycle "three times more likely than random cratering hypotheses".)

Their work also bears many similarities to Michael Rampino's,  described in Monthly Notices of the Royal Astronomical Society, whereby Earth - passing through concentrated regions of this (hitherto unobserved)  dark matter-  could also send comets on an Earth-bound collision course. Even more alarming, dark matter particles could also ramp up temperatures in our planet’s core, which could affect then geological systems and trigger extinction events. In an extreme case it could cause the cataclysm illustrate at the top. (More on this at the end of this post)

I don't buy it, sorry. Like many astronomers, I'm convinced an ordinary, garden variety (albeit large)  asteroid spelled the end of the dinosaurs and roughly 75 percent of the terrestrial organisms at that time.

Randall and Reece claim their model of the galaxy yields a means to ascertain what the cyclic period for collisional catastrophes would be, and it turns out to be very close to the 32 million year cycle of their dark matter disk model. (Deemed three times as likely to occur as random cratering, e.g. from a large Apollo object of 6 miles or more in diameter).  To revisit this latter model, as I pointed out in a previous post (Oct. 6),   the probability of an Earth-crossing Apollo asteroid event is based on an estimated 15 Apollo objects acquiring an Earth-crossing orbit every million years. 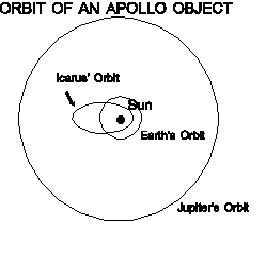 From this it has been reckoned that the odds of a given Apollo Object eventually hitting Earth are 5 in one billion. This works out to one impact, on the average, every 200 million years. This is about six times less frequently than the estimate on which Randall-Reece's work is based. But wait. There are about one thousand such objects in all so that the probability that any one will strike Earth is now: (1000) x (5/1000000000) = 5/1000000. This figure: 5 in one million means that time wise, 5 asteroids would be expected to strike Earth every million years, or one every two hundred thousand years.

The most recent crater formed by a true Apollo object (as opposed to a large meteoroid) is at Lake Bosumtwi basin in Ghana, Africa. This is about 1.3 million years old. On this basis, the Earth is certainly long overdue for another hit of staggering proportions. Indeed, from the mean frequency of collisions we have worked out, the Earth should have been struck at least six times since the last impact by an Apollo object. The point is the collisional frequency is really higher than the one the Harvard authors propose, although these are not necessarily on the "planet killer" scale . Still, each such collision, like the one at Lake Bosumtwi, would be expected to wreak much havoc.

"Our analysis furthermore yields a posterior distribution that, based on current crater data, singles out a dark matter disk surface density of approximately 10M⊙/pc2 . "

They also append a scale height of z » 10 pc.  But it can be shown that their putative disk, with density falling exponentially with radius, e.g.  r d (R,z) ~ exp(- R/ R d ) is unstable for any length of protracted rotation given the electrodynamic environs of the galaxy. As the authors themselves point out: "In reality, a thin disk will fragment into smaller clouds the final size of which depends on details of cooling and angular momentum transfer", e.g. L  = I w  where I is the moment of inertia of the disk.

Which elicits the question of how stable their matter disk would be over time. The dark matter is presumed distributed in a "roughly spherical halo growing less dense over a distance of 20 kpc". However, the authors leave open the possibility for a "small fraction" of the non-baryonic dark matter to have interactions similar to the baryons and thence to "emit dark photons", dissipating energy - thereby "cooling into an even thinner disk embedded into the ordinary baryonic matter disk".

The mass element dm does not remain stable over even a 1 Myr period and denotes a potential "smaller cloud", i.e. that has become detached owing to plasma instabilities that arise in the core region of the disk and propagate outwards.

More importantly, as soon as the dark matter disk is embedded into the ordinary matter disk, we have the potential for two stream instability. This occurs when one relatively colder plasma component has a slower relative velocity with respect to the other (warmer) component. The authors give the mass density of the dark disk as  13 M⊙/pc2  and their dark halo energy density is given as 0.037 GeV/ cm3 .  (They revise their mass density toward the end of the paper to make it comport with a more probable process). This includes 2 M⊙/pc2 of "hot gas" so it must be a form of plasma. Hence, the two stream instability is incepted by the difference in relative velocities between the disk dark matter and disk regular matter. (I assume at least half the halo energy density is transferred to the disk dark matter).

Therefore,  we obtain a "double" Maxwellian distribution such as shown below, where the faster forward "bump" on the tail (i.e. of the dark matter distribution f DM  ) is advanced over the matter disk component.

The velocity v(DM) is estimated from the authors' parameters and from my assumption (0.5 r d) to be:  v(DM) = 5 x 10 7   cm/sec. In the region where the slope is positive (¶ f M  / ¶ v > 0) there is a greater number of faster than slower particles so a greater amount of energy is transferred from particles to associated (e.g. Alfven) waves.  Since  f DM   contains more fast than slow particles a wave is excited, and there is inverse Landau damping such that plasma oscillations arise in the positive gradient region which are unstable.

Where wDM denotes the plasma frequency of the dark matter particles. Resonant particles (at vDM  »  w DM  / k)   are the first to be affected by the local wave-particle interactions and have distributions altered by the wave electric field, E1, such that the total energy balance:

For which the wave energy (E1 w) balances against the kinetic (particle) energy (E1 k ). Thus, for        S Etot = const.,  as ṽ decreases, ½ eo | E1 |2]   increases. In Landau damping the exact opposite occurs, so as the decrement associated with ¶f(v)/ ¶ v decreases, the wave amplitude (and  E1 w) decreases, particle kinetic energy increases- i.e. energy is fed to the particles at expense of waves.

Using these parameters it can be shown the disk subsequently  becomes fully unstable via plasma wave instability (and rotation) within time scales much less than needed to make the 32- Myr cycle.

It should also be noted that a secondary 2-stream instability will be incepted in the dark matter disk itself as a result of the  hot gas region which is shown as a small bump on the tail in the sketch below:

Here a much smaller peak emerges on the tail of the principal distribution. In effect, we have an unstable model with two, 2-stream instabilities - plausibly occurring in tandem. A more complete examination of the details will be given in the near future.

It is instructive to point out that Michael Rampino of  NYU has also proposed a cataclysmic model based on dark matter (see earlier link to MNRAS).  He conjectures that about every 30 Myr the Earth passes through dense "knots" of normal dark matter, i.e. composed of baryons such as protons, neutrons.  Thus, one can theoretically examine physical parameters like the ion gyrofrequency e.g.


and the gyro-radius or Larmor radius:


According to Rampino, quoted in an issue of Discover (Sept., 2016)  these baryonic particles could "tunnel" (like cosmic rays) to the center of Earth initiating a mutually annihilating reaction with baryons in the planet's interior- potentially heating the core by hundreds of degrees. (See graphic at top).  This would then induce volcanic eruptions, rising seas etc. and your basic cosmic incepted catastrophe.

The question remains whether all these exotic hypotheses are really needed. My take, as stated in previous posts over the past 7 years,  is that the sheer volume of published research in multiple areas now is making it much more difficult to arrive at truly original work. This in turn drives contributors to delve into ever more obscure, esoteric and even outlandish proposals.

Irrespective of the particular "outlier",  the single commonality is that the  all the  models violate one abiding principle applied to all good hypotheses:   "Ockham's Razor" . This is also known as the principle of parsimony. That is, the simpler of two or more competing hypotheses is to be preferred. In this case, Luis Alvarez hypothesis of an ordinary (but large) asteroid is to be preferred over a comet that requires a dark energy -matter disk generator making 32 Myr cycles. I'd also argue that Rampino's "normal dark matter" model isn't required to explain cosmic catastrophes, or any model that requires cycles "tuned" to galactic revolutions.

Perhaps again, what we really need is for the thousands of journals to emphasize more quality as opposed to sheer published quantity.  According to one 2007 study, half of academic papers are read only by their authors and journal editors. This is nothing short of astounding but makes the case again for limiting the published papers to only the best and in addition, referees rigorously applying the principle of parsimony before accepting a paper for publication.  We also need to impress on institutions to halt with their 'publish or perish' demands and use alternative means to determine whether  faculty qualify for tenure.