The Importance of 'PI' On "PI Day"

Today, March 14 is designated as "PI day' given it is expressed as 3/14  (3.14) the first three digits of pi (p ) or the ratio between the circumference and diameter of a circle. Thus, we can write:

How important is  p ? Extremely so! And it is arguable that without it we'd never have devised a spherical geometry. Indeed, several posts ago I showed the solution of the spherical trig problem for distance (in terms of a great circle) from Barbados to Bristol, England. The correct working out of the distance entailed finding the distance in miles per degree, given the known circumference C of the Earth. We found this to be:  24, 901 mi./   360 deg  =   69.1 miles per degree

Which was then multiplied by the angular distance to obtain the great circle distance in miles.

From this basis also, i.e. the fact there are 360 degrees in a circle, our terrestrial system of longitude and time zones is derived.  Thus a “time zone” is defined by taking the 360 degrees through which Earth rotates in one day, and dividing it by 24, since it requires 24 hours to make one revolution. Thus, one standard time zone would be generated via (360 deg/ 24 hr) = 15 deg/h or 15 degrees of longitude per hour - so be 15 degrees of longitude in expanse. Thus, time zones (calibrated per HOUR) are marked out by LONGITUDE differences,

All longitudes west of Greenwich mark time earlier – and all longitudes east of Greenwich mark times later. Thus, Berlin will always have a time later than London, and London will have a time later than New Orleans. The time difference is referenced to longitude difference for the central meridians. For example, if London is at 0 degrees longitude, and New Orleans is at 90 degrees west longitude.

From the circle, of course, one can also derive the sphere, by the mathematical process of integration, e.g. 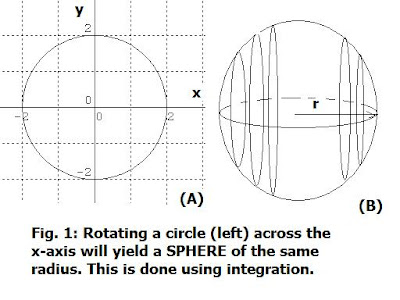 Thus, mathematically, we take a circle – say defined by:

And rotate it around the x-axis to generate a sphere. This is done by using calculus to integrate:

p(4 -  x 2) dx from (-2) to +2. Thus, in the process of rotation an infinite series of circles is generated, to obtain a sphere with radius 2 and volume 33.427 cubic units. That the integration yields cubic units – proves that the result is a sphere since circles lack volume as geometrically defined.

These have enormous applications in both physics and astrophysics.    For example, one of the key equations for the construction of a stellar model, is expressed:

for the mass of the spherical shell we obtain:

the mass of the stellar shell between an outer  layer of a given star (at distance r + dr)   and a deeper stellar layer (at dr). This is approximately, 4p r2 r dr, provided that dr  (shell thickness) is small.

Then in radio astronomy, we are concerned with  the flux emitted for an isotropic (lossless) antenna, and an anisotropic antenna with the gain (g) subject to the constraint:


Where   4p    denotes the solid angle subtended in steradians.  From this one can obtain the relation between the gain of the antenna and its effective aperture (A) such that:

Showing the radius is scaled into n (standing) waves of wavelength lD   as shown with:

This wave-orbiting electron atom still has a radius r,  but with waves each separated by one de Broglie wavelength , lD.   Thereby  an integral number of such wavelengths form the circumference of the atomic orbit, as required by  the condition:  2p r =  n lD.

A question that arises is how the value for p  originated?  Given the import and applications of the wheel it is clear all civilizations had to arrive at a value at some time, preferably earlier than later. The ancient Egyptians used: 4 x (8/9)2  .  Which turns out to be 3.16 or within two hundredths (0.02) of  3.14

The first reasoned estimation of  p  is attributed to Archimedes, in the 3rd century B.C. He did this by patiently drawing polygons inside and outside a circle, always adding more and more sides until he approached the circle boundary itself.  Thereby he "closed in" on  p  ultimately via a polygon of 96 sides, finding:   223/ 71  <   p    <   22/ 7.  The latter is still used, generally in basic arithmetic classes or where higher accuracy isn't critical.

The first use of series to obtain  p  was probably by the Indian mathematician Madhava in the 14th century, using trigonometry to obtain:

Whereby he was able to calculate  p  to 11 decimal places.  Of course, today the most powerful computers can compute p to millions of decimal places. But far more critical than million place accuracy is the sheer variety of applications for which pi  can be used with much less accuracy.
Posted by Copernicus at 9:44 AM