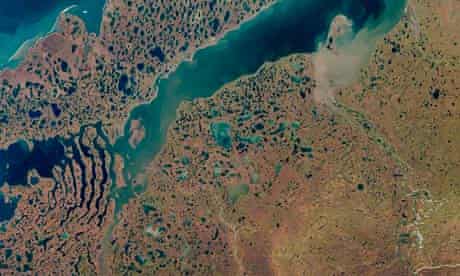 Recall two years ago (May 9) I referenced the much more rapid release of methane gas from the Arctic. I cited the Nov. 26, 2013  issue of the peer-reviewed journal Nature Geoscience, in which the authors warned of the Arctic Ocean's release of  methane at a rate more than twice what existing scientific models predicted.  Natalie Shakhova and Igor Semiletov at the University of Alaska- Fairbanks' International Arctic Research Center - after a decade spent researching the Arctic's greenhouse gas emissions- found this unexpected result.

Now, a new study of permafrost has found that the ice wedges forming the prevalent honeycomb pattern across the tundra appear to be melting rapidly across the Arctic, changing the hydrology of the region and accelerating the release of greenhouse gases with major implications for global warming. As I noted in previous posts, the main gas released in permafrost melting is methane, which traps 25 times more atmospheric heat than carbon dioxide does on a 100-year timescale. Hence, any significantly increased release of methane is serious cause for concern. Especially as one JPL scientist (quoted on a recent episode, #3, of HBO's 'VICE' ) asserted that in a worst case scenario (i.e. we can't slow the melting) the temperature could increase 8-10 F. Given  6 C (9.6F) is approaching the threshold for the runaway greenhouse, this is critical.

While the gradual warming of permafrost has been well documented in the Arctic, this most recent  study published in  Nature Geoscience indicates that a brief period of unusual warmth can cause a rapid shift. Focusing on the polygon ice troughs associated with wedges of ice that thrust deeply into the ground, the study found the ice wedges are quickly melting, amplifying the loss of permafrost by altering the storage and movement of water.   According to Cathy Wilson, a geomorphologist with Los Alamos National Laboratory (Earth and Environmental Sciences Division), who coauthored the paper:

“The unique structure of ice wedge polygon landscapes promotes ponding of water and the accumulation of vast stores of soil carbon as wetland vegetation dies off seasonally and is buried and frozen over thousands of years, When ice wedges melt, the land surface collapses to form ‘thermokarsts’—lands dominated by irregular marshy hollows and small hummocks. These thermokarsts dramatically change hydrology by either creating a lot of new ponds, which absorb heat and increase thawing of the tundra, or draining and drying polygon ponds by connecting them into a continuous drainage network.”

Permafrost is hundreds of meters deep in many places and has been frozen for millennia.  It covers nearly 24 percent of the Arctic and stores nearly 1,700 gigatons of organic carbon, far greater than the amount of carbon already in the atmosphere. Permafrost has been thawing in recent decades and releasing greenhouse gases. Wilson and other Los Alamos scientists have been working to understand how changes in permafrost hydrology might alter the Arctic carbon cycle, including the possibility of a large-scale greenhouse gas release from thawing permafrost.

Ice-wedge degradation has been observed before, but this is the first study to determine that rapid melting of ground ice  (as opposed tp sub-sea permafrost) has become widespread throughout the Arctic. The research team predicts that the melting—already occurring at sub-decadal timescales—will expand and intensify across the region, and this could escalate global warming and create more feedbacks.

“When permafrost thaws, microbes get active and start decomposing the carbon in the soil. This generates greenhouse gases. We want to know how much gas will be produced, how fast it will be released from the soil, and if it will be methane or carbon dioxide. Hydrology is critical, because more thermokarst ponds result in more methane, but more drained land results in more carbon dioxide.”

The international team combined observations about the types of ice wedge polygons and how they changed over time across the Arctic, where the team was already performing various permafrost studies. According to the paper, although these regions contain “cold permafrost,” with an overall average temperature of about minus-14 degrees Celsius, surface thawing still occurred at all of the 10 study sites across Alaska, Canada, and Russia. According to Anna Liljedahl, a researcher from the University of Alaska Fairbanks and the paper’s lead author:

“It’s really the tipping point for the hydrology. Suddenly you’re draining the landscape and creating more runoff even if the amount of precipitation remains the same. Instead of being absorbed by the tundra, the snowmelt water will run off into lakes and larger rivers. It really is a dramatic hydrologic change across the tundra landscape.”

At the studied sites, ice wedge degradation occurred in less than a decade. In some cases, a single unusually warm summer was enough to cause over 10 centimeters of surface subsidence.
The team’s synthesis of field observations, remote sensing, and hydrologic modeling documents trough formation (from melt and subsequent water movement) across the Arctic continuous-permafrost domain.  As Wilson noted:

“Change is happening so fast. I never thought I’d see thermokarst occur over the course of a few years at our field site. It’s pretty exciting, but scary too. Even though the goal of the Los Alamos research is to improve the representation of permafrost hydrology in coupled climate models, I hope these findings will immediately help the general public and policy makers understand just how vulnerable the Arctic is to climate change.”

It's crucial to point out that even the slow emission of a much smaller proportion of the vast quantities of methane locked up in the Arctic permafrost and offshore waters could trigger catastrophic climate change and "steep" economic losses, they say.  By "catastrophic" I mean ushering in the runaway greenhouse effect, which will arguably usher in the most devastating event since the Chicxulub  asteroid impact that eliminated the dinosaurs 65 million years ago,  In this case, humans stand to be eliminated in prolonged unbearable heat that will make most wish for death.

Back in September of 2012, I pointed out that Arctic sea ice largely melts and reforms each year, but is declining at an unprecedented rate. In 2012, it collapsed to under 3.5m sqkm by mid September, just 40% of its usual extent in the 1970s. Because the ice is also losing its thickness, some scientists expect the Arctic ocean to be largely free of summer ice by 2020.

The growing fear now is that as the ice retreats, the warming of the sea water will allow offshore permafrost to release ever greater quantities of methane. A giant reservoir of the greenhouse gas, in the form of gas hydrates on the East Siberian Arctic Shelf (ESAS), could be emitted, either slowly over 50 years or catastrophically fast over a shorter time frame, say the researchers.

The ramifications of vanishing ice will also be felt far from the poles, they say because the region is pivotal to the functioning of Earth systems, such as oceans and climate.   According to Prof Peter Wadhams, head of the Polar ocean physics group at Cambridge University and one of the authors of the paper published in the journal Nature.:

"The imminent disappearance of the summer sea ice in the Arctic will have enormous implications for both the acceleration of climate change, and the release of methane from off-shore waters which are now able to warm up in the summer,"


"This massive methane boost will have major implications for global economies and societies. Much of those costs would be borne by developing countries in the form of extreme weather, flooding and impacts on health and agricultural production,"

According to the authors, who calculated that 80% of the extra impacts by value will occur in the poorer economies of Africa, Asia and South America:

"Inundation of low-lying areas, extreme heat stress, droughts and storms are all magnified by the extra methane emissions,"

They argue that global economic organizations  (as well as national leaders, like Trump) have not taken into account the risks of rapid ice melt. These myopic interests believe that the only economic downside to the warming of the Arctic is the possible risk of oil spills.. On the risk scale of 1 to 10, that is like a 0.5 where effects of rapid permafrost melt is nearly a 10.   Enclaves of market fundamentalism, like the U.S. now under Trump, have no remote idea how they are putting their own and the global populace at grave risk. But why would they when the only fare Trump reads, for example, is comics.

As the authors point out:

"Neither the World Economic Forum nor the International Monetary Fund currently recognizes the economic danger of Arctic change."

Why not? Because, as Naomi Klein has eloquently put it in her book, This Changes Everything: Capitalism Vs. Climate Change. capitalism is unable to affect or alter  the course of climate change due to its dependence on fossil fuels and need for continuous growth. As de facto agents of global capitalism, the WEF and IMF would therefore have minimal interest in accepting the extreme dangers of rapid climate change.

Instead of humping and hyping an Arctic "all year  transport route", they ought to be paying much more attention to the largely unseen time-bomb set to blow the planet into a permanent burn. The impacts of just one giant "pulse" of methane "approaches the $70-tn value of the world economy in 2012", said Prof Gail Whiteman, at the Rotterdam School of Management and another author.

The new reports come as Scott Pruitt and the Trumpies are implementing plans to keep the fossil fuels pouring out of land and sea, ensuring the CO2 concentrations will ramp up heating and release the methane from the melting permafrost.  It is absolutely the wrong time to drill any more petroleum in any form from the ground - and as the JPL specialist quoted on 'VICE' put it: "it will mainly be our grandchildren who suffer the most".