Can We EVER Educate Trumpkins On The Difference Between REAL Socialists and Nazis?

I said it before but it bears repeating, that too many are insufficiently educated in political history to know basic  differences, say between National Socialism (Nazism) and real Socialism. And not to put too fine a point on it, it's a big issue to me because as a (Democratic) Socialist I won't want to be fucking compared to or conflated with, Nazi scumballs.

Sadly, most of those who don't know any better - and likely have read the least real history- appear to be Trumpkins or those who slavishly follow their master, The Donna, aka Donald Drumpf.  As shown in previous posts the right wing blogosphere is replete with disinformation, misinformation - in particular of deliberate conflation of  textbook socialism  with  German National Socialism, despite the fact that Hitler not only dispossessed and brutalized leftists: Marxists, Socialists and commies, but dispatched them for "final solution" in concentration camps as well.


When one accesses serious resources and history texts, as opposed to comics and Faux News, one can easily see Hitler couldn't have been a real socialist by his very actions and policies most of which were totally antithetical to Socialist values. Thus, he didn't use trade unions to parlay them into any "workers' paradise" - he squashed them like bugs!

Why did Hitler hate Socialists so much, with such intensity? Robert Payne in his biography of Hitler (The Life and Death of Adolf Hitler)) acknowledges it was because the originator of Marxism, Karl Marx, was a Jew. Hitler thereby erroneously inferred that Socialism was an inherently Jewish economic philosophy and its practitioners were also Jews. Hitler, like so many Americans today, committed the fallacy of composition - a logical error attributing to an entire class (the whole) what is true of only one part,  or in this case one person (Marx).

Why can't these conflaters just admit their error and walk away? Because most are Right extremists and to admit that would be to admit ideological kinship with the Nazi Right or "National Socialists" - who merely employed the S -word to misdirect the gullible. Hitler is associated with the RIGHT because he espoused FASCISM, which is RIGHTIST! In addition, as documented by Ian Kershaw in his magnificent account of Hitler’s rise to power (‘Hitler Nemesis’) the pre-Reich Weimar Republic constituted a weak democracy which had little or no control over the most radical Rightists, especially Hitler’s (actually, originally Ernst Röhm's) NSDAP party. They would regularly beat Marxists, socialists, and any leftists on the streets while holding up signs that read: “Tot dem Marxem!” (Death to Marxists!)

Kind of a damned funny way to show kinship with REAL Left Socialists! IF the fucking Nazis were real Socialists why did they regularly beat the living crap out of actual Socialists? So far none of the geniuses that make these false cartoons - like the one shown- has been able to answer that question.

Now, if these geniuses who insist Hitler "wasn't of the Right" are correct, then WHY beat up on Marxists, Socialists and Commies of the LEFT? Huh? My late friend Kurt's films - from his archives -also showed the same thing! 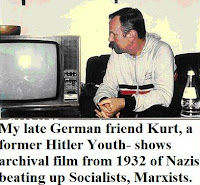 Hundreds of gangster S.A. (enlisted by Hitler) swooping in on a crowd of union workers, Socialists and Marxists and beating them half to death.

THIS IS HISTORY, ACTUALLY DOCUMENTED! If the American Right doesn't wish to be associated with this, I fully understand, but to try to revise history because you abhor the Rightist link is both pigheaded, and disingenuous. Take ownership, then move on!

Hey, it's understandable the American fanatical Right doesn't want to be associated with a mass murdering psycho but blatant historical revisionism isn't the way to make your case.  Kershaw again - on Hitler's links to capitalism (‘Hitler Nemesis’, p. xxxiii):

Note carefully: It wasn't Hitler destroying right wing parties but LEFT WING PARTIES and TRADE UNIONS! THIS is why the German capitalists, such as Krupp, Volkswagen, I.G. Farben (infamous for later manufacturing the Zyklon B gas used in the gas chambers) etc. threw their lot behind him and provided the political ballast, without which he could never have become 'Der Fuehrer'.

Beyond all this, we now have very solid evidence, thanks to released FOIA files, of how close the Republican Party has been to the Nazis of Europe. We have to thank author Russ Bellant (Old Nazis, The New Right and The Republican Party, South End Press, 1990), for meticulously documenting how and when Nazi-SS elements and cliques infiltrated the GOP and insinuated themselves into the national political framework. (Which makes one wonder how many of their past policy formulations, e.g. Paul Ryan's "Medicare Voucher plan" are Nazi-based, or hatched originally by Republican Heritage groups. Or how much the Koch brothers - who were raised by a Nazi nanny imported from the Reich- were influenced by her thinking and ideology.)

No connection between the Nazis and American Right? Hell, they're freakin' bedfellows!

The continuing display of ignorance by the Trumpkins only reinforces the perceptions that current analyses of supporter backgrounds disclose.  Rather than provide grist to that mill I'd have thought Trumpian bloggers would seek to show their education is vastly greater than those data appear to show - not less.
Posted by Copernicus at 1:30 PM