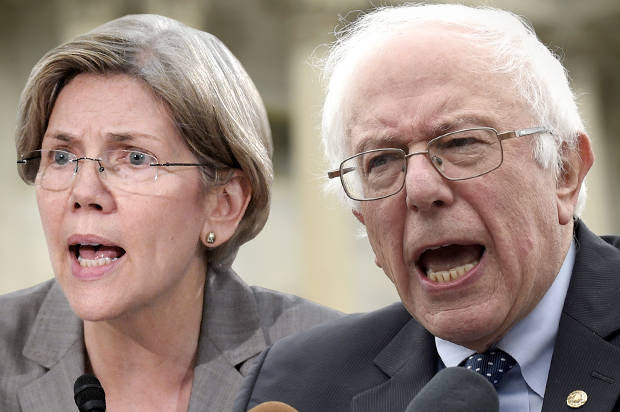 The interview with Sen. Elizabeth Warren on Rachel Maddow last night was interesting for being basically uninformative. We learned, for example, that the Repukes brought Trump's extremism on  themselves by tolerating extremist obstruction in the Senate. This included blocking every Obama initiative (like the ACA, closing Gitmo and immigration reform) as well as appointments to the National Labor Relations Board and other agencies. And now we have their latest posturing, in the Supreme Court impasse,  another case of the Repuke Senators "refusing to do their jobs" -  e.g. in exercising advise and consent for a soon to come Obama nominee. As many have noted, refusing to even hold hearings is not advise and consent it's delay and obstruct. But we already knew all this and hopefully the extremist Rs will pay at the ballot box on Nov. 8.

Less illuminating was when Maddow asked Warren about the lack of endorsement whereupon  Warren launched into this 7 minute long spiel about "this great democratic conversation" - totally dodging the question while flattening distinctions between Hill and the Bern.  The way Warren seemed to put it: Why should she have to make a choice with two terrific candidates in play? Well, at least  in comparison to the Repuke clowns.  She also left an air of neutrality hanging at the end, almost emulating perfectly the geopolitical strategy of Switzerland. But it doesn't wash, not for Elizabeth Warren.

Anyone who knows anything about Warren and Sanders is aware that Sanders is the inheritor of the same progressive forces and memes that swept Warren to her senate victory in 2012.  I mean they're like two peas in the proverbial pod, They’re perfectly aligned on every issue of consequence. Indeed, at least one salon.com columnist writing a piece for the Jan. 26 web edition noted Warren gave a speech on the Senate floor on Jan. 21. She spent most of her time outlining the steps Congress could take to purge dark money from our political process. Dark money? Like from the Kochs? Where, from whom, have we heard that before? Anyone?

The most relevant takeaway is that Warren's Senate speech already qualified as an indirect endorsement of Bernie.

“We have a problem: money. Six years ago today, the United States Supreme Court made the problem worse – a lot worse. Thanks to the Supreme Court, our system of elections is riddled with corruption. Money floods our political system. Money that lets a handful of billionaires shape who gets into Congress and may decide who sits in the White House.”

“Washington works great for a handful of wealthy individuals and powerful corporations that manipulate the system to benefit themselves…It works great for the lobbyists and the lawyers who slither around Washington, day in and day out, but for everyone else, Washington’s not working so well. And if we don’t change, this rigged political game will break our country.”

“We are headed into another presidential election and I speak out today because I’m genuinely alarmed for our democracy…It is time to fight back against a complete capture of our government by the rich and powerful.”

Look over the transcripts of any of Bernie's recent speeches and note  how indistinguishable these remarks are from what you've  heard in his stump speeches. Warren’s agenda is Sanders’s platform, and this speech left no doubt about that. Even the specific phrases Warren uses, like “rigged political game,” mirror Bernie’s language.

The problem with a Senate speech pseudo "endorsement", of course, is that few citizens are likely to see or hear it unless it goes viral. That is about as plausible as aliens landing and kidnapping Donald Trump and hauling him to the third planet in the Zeta Reticuli system for a brain harvest. So, unless the endorsement is public and stand alone - it won't get much media attention or help the candidate who needs it, in this case Bernie.

Some may say, well she is just dithering a bit because she might believe HRC is more "electable" and she'd favor getting things done if even in a more incremental way. But this simply doesn't pass the political smell test. No way.   As the beneficiary of outsized speaking fees from the big banks, Clinton is simply too much a captive of Wall Street. The same Axis of Financial Evil that Warren has spent her entire career battling. To use the analogy of one Boston Globe columnist —" it would be as if an antiabortion candidate like Marco Rubio were giving paid speeches to Planned Parenthood affiliate."

Any putative Hillary endorsement also doesn't wash if one investigates the history of Warren's criticisms of her. For example,  in a 2004 interview with Bill Moyers, Warren accused Clinton, then a senator from New York, of voting for a bankruptcy bill that was sought by the financial industry and that Clinton had previously opposed as first lady.  Asked why Clinton switched, Warren blamed the financial industry donations lining Clinton’s war chest. Of the big banks, Warren said Clinton “worries about them as a constituency.”

Thus, for Warren to endorse Hillary, she’d have to repudiate not only the anti-Wall Street crusade that carried her into office, but also her own words.  She'd look not just like a fool but a malicious, capricious and cynical fool who's been manipulating her supporters all along. Saying one thing and doing another.

This still leaves open why she hasn't explicitly come out for Sanders. Some have said she still truly is of two minds, and cited Warren's signed 2013 letter (with the other Democratic women in the Senate) encouraging Clinton to run for president. Since then, Warren has clarified that it shouldn’t be taken as an endorsement. Given Clinton’s entanglements with Wall Street, it’s easy to see why.

Another possible explanation was offered by  one commenter on reddit.com

"She's keeping her powder dry to use at the convention to helping to bring the Sanders folk on board by getting concessions (whatever those are worth) from Clinton. If she endorses now, that leverage is spent."

Maybe. But now is the time - in the middle of the primary season - when Bernie could really really use her support, especially with key industrial states coming up for grabs next Tuesday. One, unambiguous, no nonsense endorsement for Sanders could be a game changer. It could net him a majority of those states and delegates, and make his chances for later convention gravitas much stronger.

At the convention, the pressure from Hillary's superdelegates and DNC honchos for all to conform (and toe the party line) may simply be too great. It is doubtful that in such conditions Warren's supposed supporting voice would even be heard, especially if Bernie's delegate count is much less than 1,000. If that is so, Hillary will feel she has no real obligation to endorse Bernie's proposals far less use any of them- even in a minor way.

Now is the time to make a stand, which could be more critical than any other speech  - or any interview - that Elizabeth Warren has given.

Will she have the courage or foresight to commit to it? That remains to be seen. For Bernie Sanders's campaign's sake let us hope she commits soon. Like before Tuesday!
Posted by Copernicus at 10:55 AM