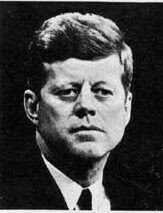 It is a sad but inescapable fact that U.S. recent history is too often given short shrift in the setting of modern American education. The result is that students later mutate into citizens who are ignorant of past policies of American presidents, and try to insinuate these misperceptions into the modern setting,.

Perhaps no more egregious example has been the resurrection of the canard (mainly by the economic Right) that JFK was an exuberant supply side tax cutter. This first crept in at the time Bush Junior (aka Dumbya) was trying to get his tax cuts passed in 2001. Numerous useful idiots emerged in the press at the time,  including Charles Krauthammer,  who insisted Kennedy was even more of a supply side tax cutter than Bush.

Of course this is absolute nonsense, and merely discloses the extent to which Krauthammer (and others) sought to exploit Americans' lack of knowledge of JFK''s actual tax policies.  To this end, artful propaganda proved most useful, including to get the pathetic Senate Dems (under Tom Daschle) on board. In March, 2001, selected snippets -  carefully edited and cherry-picked from a JFK speech before the New York Economic Club in December, 1962  - were show in ads. The snippets-ads ran continuously in three conservative states in which Dem Senators were up for re-election: Louisiana, South Dakota, and Georgia. All three voted heavily for Bush the previous year.

JFK's speech endorsed a general tax cut, and let's bear in mind at the time that the top rate was 91%. JFK proposed lowering it to 65% for the wealthiest, still nearly two times what the current top rate is for them (after the Bush tax cuts). Seldom mentioned in conjunction with JFK's tax cut proposals were the other aspects he had in mind, including:

- the repeal of all tax advantages by corporations operating in low tax countries, such as Switzerland

- Withholding tax on the investments, dividends and capital of the wealthy to ensure revenues could not be lost by too many shelters or at the 'end point'.

- Tax on investment dividends so that all those earning in excess of $180 k would pay a much higher rate.

-The elimination of special 'gift' transfers as well as repeal of the $50 dividend exclusion and the 4% dividend credit.

In addition - again omitted by the conservo parrots - JFK targeted large oil and gas producers who had been manipulating a (1954) law to avoid taxes and gain an advantage over smaller producers. Sadly, most of his provisions didn't survive the compromises forced by congressional committees (which held JFK's original Medicare, and Civil rights legislation up for ransom.) These were later seized on by LBJ following the assassination he helped to orchestrate. LBJ understood that incorporating these into his "legacy" would further weaken the brains of later liberals who would write him up as  "good Prez" instead of a traitorous rat. We call this out as hagiography - writing fulsome revisionist crap to make a historical figure appear better than he really was. See e.g.

Kennedy absolutely wanted all these provisions included in any tax cuts, but he faced a rebellious congress which watered all of them down to the point of being essentially non-existent. The final bill that was passed, therefore, was barely a weak sister of what JFK actually wanted. Despite this setback, he never stopped fighting for economic justice via the tax code. Fortunately, the record in the reactionary media at the time supports this fully.

But don't take my word for it, just consult the financial press at the time, to see how they actually felt about JFK's proposed policies and initiatives. One of these, which appeared in Fortune accused him of an attempt to "manipulate the tax level against the business cycle". ('Activism in the White House', June, 1961, p. 117). Two years later, Fortune implored Congress to stop JFK from using tax policy "as instruments to manage the economy". ('The Dream Businessmen Are Losing', Sept. 1963, p. 91).

These aren't just fiction, but historical records of the press of the JFK era and what THEY actually thought of his tax proposals. They are available to anyone with the diligence to seek them out.

Along the same lines, the "central organ of finance capital" - The Wall Street Journal, launched various articles and diatribes accusing JFK of being a "statist" and other things. Some of those articles include:

Meanwhile, Henry Hazlitt, contributing editor at Newsweek (The Washington Post's sister publication) was airing many of the same complaints against JFK. These polemics, appearing regularly in Hazlitt's 'Business Tides', included taking JFK to task for his tax policies - including the proposed tax on U.S. business earnings abroad while he also chastised Kennedy for "welfare spending".

All this is germane now as we continue to see codswallop penned by ignorant screwballs, as in the Jan. 31 letters section of the WSJ:, to wit:

-"Kennedy understood 20-plus years before the Laffer curve that if you want more of something tax it less"  (Michael J. Perullo, CPA, Atlanta, GA)

- "JFK is primarily remembered for  Camelot and his tragic death and not for his too brief push for lower tax, pro-growth supply side economic policies" (William Hogan, Savannah, GA)

Both of which claims would have Henry Hazlitt and those early 1960s Fortune and WSJ authors rolling in the aisles laughing at the level of ignorance and gullibility of the two letter writers - if they could suddenly emerge from the past and read their arrant twaddle.

The Laffer-referenced BS by the CPA is especially choice. More of something so tax it less? That absurd supply side ploy was attempted in Barbados, in FY 1987. The usually democratic socialist state had just elected a new government (in 1986) that was determined to experiment for the first time with 'trickle down' supply side bunkum.   After all, it appeared to work with Reagan.

They were warned by the country's top economists (including Dr. Courtney Blackman) that it would lead to disaster, but they took no heed. Finding it more to their liking to pander to a naive (then!) populace to garner votes, they couldn't renege once in power, if they wanted re-election.

The supply side idiocy was implemented for tax year 1987 and beyond and five years later (and the loss of 35,000 (out of 105,000) jobs), with reserves barely at $11 million, the island had to go to the IMF for loans as its cash flow had evaporated. The IMF injected nasty medicine - in the form of across the board pay cuts- and higher taxes, though devaluation of the currency was avoided. The pain is still felt today, as succeeding governments have had to impose ever higher  VAT or value added taxes, including on foodstuffs.

More of something? Bajans learned they got less and less. But even an ordinary common American now is still plied with the tax-foolery analog that if you cut off a man's leg he can run faster.  JFK, of course, would have seen through this idiocy instantly which is why no supply side nonsense appeared until Arthur Laffer drew it out on a napkin for a Reagan economist.


What was the biggest irony of all? That one of Reagan's top professional economists, Martin Feldstein, actually pooh-poohed Laffer's curve. In a 1986 econ article Feldstein admitted he "never believed Laffer" and referred to his "curve proposition" as the "height of supply side hyperbole". The tragedy is that Feldstein's article was snuffed by the Reaganites, and Feldstein himself never broached it, especially after being given an office in the administration. Hey, a sellout is a sellout!

But JFK never was, and would have engendered one of the best tax policies of the 1960s had a bought out congress not forced compromises.

Fortunately, those of us invested in the facts are still around to correct the record and salvage it from these latter day PR and propaganda meisters- at least for those who will pay attention.
Posted by Copernicus at 8:31 AM