Do Scientific Cranks Even Know They Are Cranks? 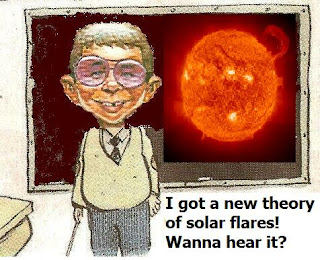 One indispensable character trait needed by any serious research scientist, especially in physics, is immense patience. Why? Because as one's name and background get circulated, including at public sites like All Experts, one is certain to be bombarded with new "theories" or hypotheses - often on how the universe actually works, or what really constitutes stellar matter or how solar flares get their energy.

How many cockeyed theories have I had to dismiss over some thirty years? Probably more than I can count. It seems very manjack  - at least who fancies himself an iconoclast  and has some minimal level of education- thinks he has a new theory or physical  insight. But when you get down to it, even after wasting time (hours) plowing through their nonsense it ends up being just the codswallop you thought it was at first glance.

What is it about certain sciences (like astronomy, astrophysics and cosmology) that draws the nuts and cranks out of the woodwork? In the past  4 years, no fewer than five individuals who've no astronomy background, not even taking a single college course, have proffered five different theories for my reaction, consideration and assessment. In no case did any of these meet even basic requirements, including articulating a testable hypothesis, and making predictions based on it.

Often when you wade through their questions (often posed as a challenge) the one significant attribute all of them lack is tests for falsification.   I don't give a damn if you've had your I.Q. tested and it comes out at the Poetic Genius or Triple Nine Society level, if your precious "theory" lacks tests for its own falsification it isn't worth an ounce of doggie lickspittle.  Which brings up the question of why these cranks can't even see that this is the cornerstone criterion of what passes for a genuine scientific hypothesis as opposed to gibberish.

For example, Ronald Satz, in a veritable waste of 19 -pages in an article in the Nov./Dec. 2015 issue of Intertel's  Integra - under the fulsome header: 'The Case Against Modern Physics' , never once produced a single test of falsification for his "reciprocal theory" bollocks. He invests plenty of time trying to tear down  assorted aspects of modern physics (which I have responded to in the latest - February- issue of Integra) but never delivers the goods to show his theory has any worth.

This reminded me of my 1980s debates with an Einstein iconoclast named Dr. Stephan Gift who expended dozens of pages in the Journal of the Trinidad And Tobago Astronomical Society trying to disprove Einstein's special theory of relativity. Despite my showing that his use of inertial reference frames wasn't faithful to Einstein's usage, he kept on keeping on and even - when I asked why his theory wasn't published in a peer-reviewed physics journal - insisted their reviewers "lacked the I.Q. to be able to parse my claims".  Well, I did and found them wanting and exposed their prime deficiency in: a) not being able to account for the energy difference in fission reactions (while Einstein did with the mass-energy equation, E  = m c2 ) and b) omitting any test for their own falsification.

Again, we see two hallmarks of the classical crank: 1) My theory is so profound, so rarefied and abstract that few men of even Mensa level (or Intertel level) I.Q. will be able to judge its merits.  (I.e. one actual reciprocal theory respondent in a recent comment (which shall remain unpublished until he meets the specifications set out in this post), claimed "I have the same I.Q. as Einstein so I don't have to take any crap" i.e. from these reviewers of pedestrian intellect).

And (2) I don't have to provide any tests for falsification because I KNOW it's true! Nah, nah, nah! (Or "My genius is of such stratospheric heights that falsification tests are manifestly redundant in my wondrously sublime intellectual cosmos!")

Alas, this doesn't work. You can come up with all the clever databases you want to try to dispose of modern physics or modern astronomy but lacking tests for your own model's falsification they aren't worth diddly squat.

Which brings us to a third attribute for crank theories and models: their own "proofiness", or the use of data and numbers  to blind people to actual principles or physical laws. Charles Seife referenced this in his book, Proofiness: How You're Being Fooled by the Numbers.  Seife decries the tactic of using numbers not just to lie but to baffle the susceptible with bullshit.  He refers to a common failing of most people unversed in math to be hoodwinked merely because some form of math or numbers are interjected into arguments.  Not just using numbers to bolster one's argument. In Seife's words, to use fake numbers to prove falsehoods and to seek to prove something is true - even when it's not- is one of the most egregious forms of  intellectual  fraud.

A much more subtle example (and would be readers at the outset are warned they need to be "degreed", sic) is this site containing supposed "databases" to support Satz' Reciprocal theory.

But on scanning the ones posed (especially for astronomy), I found nothing to convince me. Just a bunch of numbers entered in barely legible-readable tables but devoid of coherence and internal logic. In other words, nothing to 'take to the bank'. Nor having any organization of thoughts and compelling arguments to tie this supposed data to end point conclusions or hypotheses. In other words, not too dissimilar from the numbers thrown together to try to overturn Einstein from the previous cited link.  If the author(s) want to convince me their  model has heft let them show me a reciprocal model substitute to account for quantum tunneling - which is essential to the working of our modern electronic devices from HDTVs, to smart phones to computers.  Or, let them present an alternative to the gravitational deflection of star light documented in respect of Einstein's theory of general relativity. Or ....let them account for the recent discovery of gravitational waves from two black holes.

Above, all - let them present me with a major test of falsification for their own model! Because until they do that, all their elaborate baloney to try to show alternatives to modern physics ends up as dumpster drivel.

Given they haven't been able to produce falsification tests (or even firm predictions from their models), it's no wonder that no genuine Physics journal of any repute would accept their papers and they can only get them published on their own Wordpress-based blogs.

Lastly, I issue this challenge: let one of these geniuses (since that's close to what they imagine themselves to be) provide me with one paper  (not just a bunch of meaningless tables) that  coherently meets ALL the criteria noted above and I will publish it on this blog with their name in neon lights.

See also this takedown of Gift:

And we see from this exchange - from several years ago- Stephan Gift is still sticking to his "relativity is wrong" malarkey: