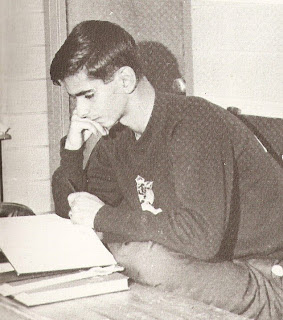 "Emilio" - a Loyola freshman, ca. 1966, studies physics while his clothes dry in the laundry room of Biever Hall. He'd have been humiliated if his parents got an apartment near by so they could oversee his choices, study habits etc. (From Loyola Wolf, 1966-67)

Back in the 1960s we deemed it a badge of independence and honor to go off to college, and commence establishing our own persons and lives in the academic environment. You never remotely heard of a parent or parents accompanying the freshman - say to Loyola or State U. - and taking a rented home or apt. to be near the little dweezil so he or she didn't feel too homesick - out of sorts, or having less than optimal study conditions.  Today, it appears to be a trend, with super-helicopter parents following their charges all the way to the hallowed halls to hold their widdo hands and ensure every textbook is pre-bookmarked for later study. .

According to an AP report in yesterday's D. Post (p. 4E):

Quoting David Siroty (a company spokesman) it was noted that agents had seen new home buys and rentals pop up around the country - always near campuses. Getting inside the numbers, they found that parents were the purchasers or renters, and typically set up home so little Debby or Bobby could come home to a nice din-din and home cookin' rather than have to eat that nasty cafeteria food.

Regina Santore, a Coldwell agent in Knoxville, TN, cited a case where she relocated one couple from a town 380 miles away on the western end of the state "so their freshman could live with them".  What ever happened to establishing one's independence which used to be something to be proud of when you were 18 - and leaving HS? Did one not "put away the things of a child" when s/he left the toys of high school behind? Apparently not any more.

According to Ms. Santore:

"They felt very strongly they did not want their daughter living on campus. They felt she would have a better study environment if she were with them."

Well, of course she'd have a better study environment! They don't usually call dormitories "zoos" for no reason! But the whole point missing this pair is that college isn't ALL about studying, it's also about learning how to negotiate interpersonal connections, interests and making life long friends.  In this case, one grasps that one might sacrifice a half a point GPA or whatever in the interest of more profound human goals. But given today's success freaks - students and parents - it's no surprise that has gone by the backboards. Better to grab that 4.0 and be a total douche than come away with friends - easier to just connect with virtual friends on FB. Sad.  But it elicits the question: What's behind the mollycoddling?

Hara Estroff Marano, editor-at-large of Psychology Today and the author, most recently, of A Nation of Wimps: The High Cost of Invasive Parenting, seems to have the answer nailed:

"But in a real sense, students don't really leave their parents behind. Their parents go to college right along with them — in their front pockets. That is, the parents are a speed dial away by cellphone. And the evidence is clear that students call parents and parents call students at an alarmingly frequent rate. This, of course, significantly reduces independence.

A student gets a C on her first paper? Instead of absorbing the negative information and figuring out how to resolve the problem or how to do better, the call gets made to home, where Mom or Dad solves the problem, often by calling the school administration. This kind of behavior is, sadly, commonplace today and is a mark of the lack of coping skills among students because all the lumps and bumps have been taken out of life for them until now."

Which is pretty much my take. Protect the precious little dears so they undergo a minimum of pain or travail. Keep them in an artificial cocoon to sustain their dependence as long as possible. Don't allow them to have to negotiate their way in an unfamiliar college environment.  God forbid!

This take is also supported by Linda Bips, college psychologist:

"Many of today’s students lack resilience and at the first sign of difficulty are unable to summon strategies to cope. The hardship can be a failing grade on a test, a cut from the team, or a romantic breakup. At the first sign of trouble many become unable to function and persevere. Often they even anticipate difficulties and their anxiety alone paralyzes them."

She then goes on to point out just how many incoming college students are on "meds" and writes:

"The number of students who arrive at college already medicated for unwanted emotions has increased dramatically in the past 10 years. We, as a society, don’t want to “feel” anything unpleasant and we certainly don’t want our children to “suffer.”


Bingo! The problem,of course, is that when they hit 29 or 35 they are still dependent little spoiled brats. Worse, they will lack any personal authenticity. Templates for narcissists as one psychologist put it.

"The resulting problem is that by not experiencing negative emotions, one does not learn the necessary skills to tolerate and negotiate adversity. As a psychologist, I am well aware of the fact that some individuals suffer from depression and anxiety and can benefit from treatment, but I question the growing number of medicated adolescents today."


So kids are overly medicated because they can't handle too much reality and hence this also explains why they need mommy and daddy to tag along to even tell them when to take a dump. In the 60s, in our college days then, we took our lumps like the adults we one day wanted to be - whether from our profs or fellow students (including for 'Hell Week' orientation). The lumps taken helped us build character, personal authenticity (not just being part of a crowd) as well as reinforced critical thinking skills, i.e. when we engaged in sometimes animated 'bull sessions' in the dorms.

Today, the presence of parents neutralizes that critical first step to adulthood and keeps the would-be college student in a prolonged state of infancy.

Fortunately, at least some of the kids saddled with parental helicopters know which end is up and aren't overly enthused. This was uncovered by a Georgetown alum, Sheila Baker Gujral - who has interviewed prospective frosh for that D.C. school. She was surprised in the course of one interview when the girl replied that her parents didn't mind "living on the east coast or west coast" then adding "so I'm applying to those places". In other words, the girl was more or less resigned to mommy and daddy tagging along.

When Ms. Gujral asked if they were going to move wherever she went to school the girl responded "Yeah" but Gujral observed "she didn't look too happy about it."

Good! Because she shouldn't! Those parents, like the misguided others, are actually retarding their charges' ability to reach adulthood. If the parents don't know that, at least the kids should.