Hello, Obama! SONY Had NO CHOICE! 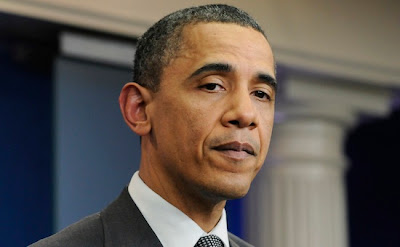 President Barack Obama is an intelligent guy, but his harsh reprimand of Sony today shows he can also be guilty of making some dumbo claims, rebukes and statements. We saw this earlier in the spring when he actually went on record as saying Russia was a "second class Power". Uh, no, dude. Not when they have nearly half all of the planet's nuclear weapons!

Earlier today Obama again showed he can sometimes be as clueless as Dumbya Bush when he rebuked Sony for withdrawing its year-end assassination flick, 'The Interview'.  The Prez said "I think they made a mistake" then followed it up with:

"I'd wish they'd spoken to me first. I would have told them 'do not get into the pattern in which you are intimidated by these kind of criminal attacks".

And what would your speaking to them have accomplished, sir?  Let's think about this carefully, not parroting the bollocks and insanity of most of the Neoliberal, paper patriot, pseudo free speech crowd in the U.S. who are also insane and no longer able to reason properly.

First, even if Sony HAD NOT withdrawn this reprehensible flick - which depicts the head of a living leader of a sovereign state (never mind you may hate it)  being blown up in its final scene WHERE the hell could they have shown it? Alas, it was the theater chains like Cinemark, Carmike and Regal Cinema which pulled it after the physical threats were announced. This represented something like 19,200 screens across the country which would have meant the most Sony could have hoped for was maybe getting a few dozen indie flick screens in the malls. Now, seriously, do you really really believe those small indie theaters would have cooperated with Sony after all the majors said 'No'? If so you are more ensconced in the proverbial la la land than your CIA head Brennan - not willing to call the CIA torture, torture.

Second, as Lawrence O'Donnell pointed out last night on "All In", for the benefit of a clueless substitute for Chris Hayes, it was ultimately about possible litigation - given the FBI itself could not 100 percent promise the theater owners that no threat would materialize. (Even a nutso creep like James Eagen Holmes, who committed the Aurora CO theater massacre,  might have used it as a pretext for an incident.)  Given this lack of 100 % assurance, had the theater owners shown the film and ANY kind of violent incident occurred THEY would have been out their with their asses in the lawsuit wind, having to pay up to injured patrons. The repercussions would be similar to what the Aurora, CO Cinemark is facing from the families of the dozen slain and nearly five dozen wounded victims of that theater massacre 2 years ago. (A Denver Judge denied Cinemark's plea to avoid the 20 lawsuits because it "had no foreknowledge". Imagine the consequences for any violent episode in a theater showing 'The Interview')

So, let's get a bearing here on reality, which appears to be a commodity in short supply in the US of A: If you really would like to rebuke anyone or any entity, it is the actual cinema companies, theater owners and litigious lawyers you would have to go after before Sony. The fact you did not do this discloses your analog to "hostage taking" is simply empty rhetoric and posturing.

"We cannot have a society in which some dictator some place can start imposing censorship here in the United States."

Sounds real testy with a tinge of humbug, and if I didn't know who had said the words I'd have attributed them to Bill O'Reilly or Sean Hannity - because those two don't think before disengaging mouth or brains (And let's get it clear it isn't a case of  "libtards" being "thin-skinned" - as we see many flocking to the film's defense, yelping they want to see this crappola too - or are four square for Sony putting it up online.  See George Clooney. This is a case of rational people who can still exhibit some mode of discretion and sense, as opposed to jingoistic twits so hyped up on paper patriotism that it's gutted their febrile brains..)

Because when you make a sweeping remark like that as if in some existential vacuum you are revealing yourself oblivious to: 1) the fact that Sony's contract with theater owners allowed their withdrawal from exhibition, and 2) was ultimately because of our litigious society - something which you as a constitutional lawyer ought to know  - because you also must have taken some tort courses at Hah-vahd to get there.

If Obama wanted to be honest in attributing mistakes to Sony, it would have been in green lighting that irresponsible dreck in the first place. Even their own execs, for god's sake, were nervous about the violent ending. Even Obama's own Dept. of Homeland Security(according to an LA Times report) warned Sony that the film "could provoke retaliation."

Ultimately, this crap film masquerading as a comedy deserved to be "assassinated" as one commenter put it in a response at Truthdig.com, because it was neither art or free speech. Showing a living leader's head being exploded and burned up in gory full screen color is not anything any normal, sane human grants as "speech" or "art" - any more than money is speech, and a color photo of a heaping pile of hog shit is art.

But it does show how far along our people - including our leaders- have lost their bearings, their good sense and judgment. More evidence as a whole that our nation - thanks to being pumped by PR and propaganda - is gradually losing its collective mind.  The critical thought test currently is only passed by those who agree that this film never ought to have seen the light of day - and to date- I have seen only two lone voices in the media, which is otherwise overwhelmed with this 'free speech' and "artistic license" BS.

One more point: It would not be wise to instigate a "cyber war" over what one Harvard law prof correctly described as a criminal attack on a lone corporation. Especially as the perceived victim nation does not launch such a war unless it is 100 percent certain all its ducks are cyber-secure and "in a row", including for infrastructure control,  power plants and water systems!

"emails suggest Sony execs remained nervous about the film’s content, especially the ending. On July 9, Lynton wrote to Pascal, “we cannot be cute here,” saying they could work with “no melting face and actually not seeing [Kim Jong-un] die. A look of horror as the fire approaches is probably what we need.” Rogen, while willing to play ball, appears reluctant to completely scuttle the visuals in this Sept. 25 email to Pascal: “There are currently four burn marks on his face. We will take out three of them, leaving only one. We reduce the flaming hair by 50% … The head explosion can’t be more obscured than it is because we honestly feel that if it’s any more obscured you won’t be able to tell its exploding and the joke won’t work.”

Another reason not to back this crappo film: