Mensa: Is It Really Full of Vicious Boors? 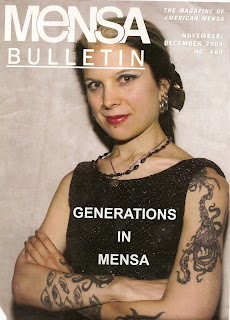 A year ago I noted the horrific attacks on a fellow Mensan, Michelle, featured on the cover of a Mensa Bulletin Issue  (see graphic) with her tats in  full view. In the wake of the cover image, she was mercilessly pilloried- mainly by older Mensans and some of the remarks can be read here:


This again elicited the question of whether Mensans are just plain vicious boors or it it was an age thing. Some further clarity arrived with the essay 'Let It Go', by Ellen Voie, appearing in the Nov/Dec issue of the Bulletin, p. 12. Interestingly, the sub-header was: 'Civilizing Blunt Communication Among Mensans'.  Voie, while noting the dangers of stereotyping "because Mensa members have so little in common",  also observed:

"However, there is one thing I have noticed from this highly intelligent group of individuals. They are very blunt. I thought about using the word 'candid' or even 'frank' but blunt works better."

She then delivered a few examples, including:

- When one member or other was trying to deliver a Power Point presentation at a Mensa event and people immediately began pointing out typos, shouting "You misspelled a word!"

- In the Bulletin Letters section, instead of disagreeing with a concept or idea, it is suggested that other writers are idiots (or morons)

-At other events when a person expresses some further interest in a topic already covered, or asks what is construed as an unnecessary question,  detractors call for a Mensa "re-test." This is taken to be the ultimate insult one Mensan can hurl at another.

My own battles against fellow Mensans (Evan and Jon Wright) were well documented in the Bulletin and also in letters back and forth where I flatly called the pair "high grade morons" after Evan J. Wright asserted that I was "writing nonsense" because I noted the much higher absorption of CO2 in the oceans. According to Wright: "That's preposterous! If the oceans absorbed carbon dioxide they'd all turn into carbonated liquid, or soda pop! Does anyone see that? NOOO!"

Jon Wright - proving the apple never falls far from the tree- then defended his pop calling me the "moron" and belching I needed a "re-test". Meanwhile, his pop went off again, in the Jan. 3rd, 2012 Wall Street Journal letters (understandable given the WSJ is firmly anti-global warming) babbling:

"Having studied this subject for about 50 years from a research engineer's viewpoint and having read hundreds of articles and scientific reports during this time, I must say that sunspots are probably a factor, more so than Earth's elliptical orbit..."

It was hard not to roll on the floor laughing at this bollocks, all in an effort to escape anthropogenic global warming.

Strangely, neither Wright could explain the increasing acidity of the oceans when pressed, though any scientifically literate citizen would grasp that the world's oceans have about 30% higher acidity as a result of the chemical reaction: H2O + CO2 -> H2CO3, in other words, the production of carbonic acid. Which shows that merely because one belongs to Mensa doesn't mean he or she knows diddly or can argue coherently.

Back to Voies' plea, she wrote - invoking the song 'Let it go' from the flick Frozen:

"The next time you disagree with another Mensan's opinion, don't challenge his or her character, just question the facts. If you see a typo on a slide don't be in a race to point it out. We know it's there and are trying to ignore it for the presenter's sake.  The next time you find yourself questioning someone's intelligence when they ask a question, let it go."

Well, how about if they claim in a Bulletin letter the oceans would "turn to soda pop" if CO2 was absorbed? Can I call them morons then?

Anyway, while her advice is understandable it is doubtful Mensans will suddenly turn into polite members of the Socratic Debate Society anytime soon. And we aren't all 'goodie two shoes' good guys merely because we belong to Mensa either. As Thomas de Shazo writes in the most recent issue of Intertel's * Integra:

"One reason we are not dedicated to benevolence with our heady resources is that no moral compass attaches to high IQ. We have our full share of petty thieves, Wall Street class criminals as well as Ted Bundy types. 'Evil' is as randomly linked with genius as with dunce."

Indeed, and boorishness and nasty language too, can attach to those of us in high IQ societies as well as any other organizations. Which leads to another deShazo observation:

"There is not much correlation between high IQ and consistent good sense. Every one of us strays off the reservation with a really stupid act once in a while."

Having said all that, let's be clear not all Mensans are vicious boors, even a majority. One of the most delightful evenings wifey and I spent was ten days ago, attending the local Mensa Holiday Party which also featured a "White Elephant Gift Exchange".  In that fun event members each bring a gift they no longer want, valued between $15 and $25 and put it in a pile then each randomly draws a number from a bowl. Number 1 goes first and selects a wrapped gift from the pile and must open it before the group. Number 2 can either do the same or grab the gift (if they like it) from Number 1. This goes through all the numbers until the last person, who can either pick the last gift or grab someone else's. Wifey and I each brought a book we'd already read, and no longer wanted, and we ended up with a bottle of Cabernet wine from another couple. (Actually I grabbed it first, then the guy took it back 15 numbers down, then after wifey's Bailey's was snatched, she used her late ticket to snatch the wine back- by which time no further exchanges of the item were allowed - two max.)

None of the 44 odd people misbehaved, insulted another (say because a gift they prized was grabbed) or delivered obnoxious jokes. We all had a great time, but also perhaps because the subjects of politics, religion or phony science never reared their ugly heads.

-----
* Intertel is the next IQ society up from Mensa, for which one must place in the top 1 percent of IQ test scores, as opposed to the top 2 percent.