Four Year Colleges Aren't The Only (or Best) Solution for High School Grads! 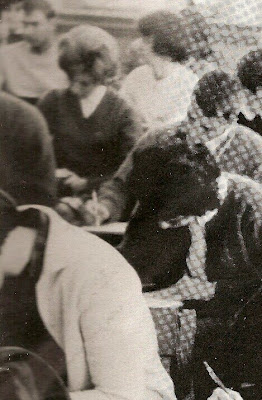 LEFT: Loyola freshman Theology class, ca. 1964.  All incoming students had at least  SAT scores  in the upper 25th percentile - and no such thing as remedial courses were heard of.  Also, the SAT was a genuine aptitude test back then -not an achievement test.


A huge error of American higher education, as articulated by Dr. Steve Mason ('The Myth of Higher Education', Integra , No. 9, Oct.  2010) is orientating it explicitly for the utilitarian purpose of making money or getting a job. As he writes:

This take is spot on, except for one thing:  most high school grads and their parents aren't looking for college to teach the art of living but in fact to earn a good living. Sadly, though, most will be majorly disappointed as they will end up either over-educated with nothing to show jobwise for their investment, or they will have spent thousands of dollars they can't afford - with no degree- and ending up with a minimum wage job.

Is there an alternative that is rational and practical? Yes, and it requires people - students and parents- not to look at a four year college as the only solution for high school grads. As reported in the Denver Post November 15, Colorado now needs 47 percent more  workers to fill "middle skill" jobs: RNs, airplane mechanics, auto mechanics, electricians, plumbers etc. Colorado, also, is not unique in such mid-level skill job needs - one can find them across the country.

Are HS students too "good" for these jobs? That's nonsense given the entire German labor system is predicated on apprenticeship for a craft. A terrific aspect of the German "master craftsman" model is that once one gets through the program required - including taking a number of examinations- he receives the equivalent recognition (including a certificate) of a Bachelors' degree. This is achieved with no additional cost.

The nature of master craftsmen in different countries can be found here:


As noted in the section under U.S.:

"While guilds as such do not exist, many trades continue the apprentice-journeyman-master model. Carpenters, electricians, pipefitters and plumbers are notable examples. Even in academia, the tradition survives, with elementary, middle and high school completing general education; with post secondary degress awarded in the Associates, Bachelor and Master levels; and PhD students as apprentices, post-docs and associate professors as journeymen and full professors as masters."

These are aspects of which most people may not be remotely aware.

The natural route now to craftsman status and good future work in the U.S., as noted by Dick Hilker in his op-ed piece in the Denver Post yesterday, is the community college. Hilker quotes Rhonda Bentz (the state system's media and government relations director)  that :

"the Voc-Technical route is the educational system's best kept secret. Students come for two year degrees and then get real jobs."

As Hilker goes on to note:

"In other words there are solid alternatives to spending big bucks at Big State U. to major in Tibetan Culture or Music Appreciation before winding up as a clerk at Mega-Mart."

A brutally frank observation, but which no rational person can dispute.

Here's another brutal fact: those who believe they will be saved by higher aspirations, i.e. going into academia via the Ph.D. route, are also in for a shock. Universities across the board are now scaling back costs by hiring more and more adjunct professors and lecturers, many of whom now have to go on food stamps because they can't cobble together enough 'gigs' (teaching courses at different colleges,usually)  to earn even a lower working class level income.

These are facts, not fantasies.


In the case of astronomy, we in The American Astronomical Society are regularly besieged with dire warnings of the pressures brought to bear by budgetary constraints on astronomy and astrophysics jobs. One editorial in an AAS Newsletter noted, for example, that more than 6 out of 10 jobs for Ph.D. degrees in astronomy are currently outside the academic marketplace. The percentage is slightly better (5 of 10) for Masters recipients.


The newly minted astrophysics or astronomy Ph.D. basically faces a herculean task in getting his or her foot in the academic door. First, he must compete with postdocs - those with Ph.D.s already in hand who now are hired at lower than standard pay rates to teach classes and work for 3-5 years "earning their stripes". Next on the totem pole are the graduate teaching assistants who teach tutorials as well as lower level classes and problem-solving sessions.

Finally, there are the adjunct lecturers, who are paid by the hour only and hired just to teach a course or two. Adjuncts receive no benefits at all and are what some call the "temps" of the academic world.

Prognostications now are for academia to go nearly 90% adjunct by 2030, with the attendant economic insecurity.  There are no trends, meanwhile, to counter this as universities are scrambling for more funds not to hire more general academics in their disciplines but to hire more 'star' professors, Nobel Prize Winners, etc. - who can bring in the research grants - but who also cost a lot to support.

Community colleges, meanwhile, are  a definite solution that is both realistic and rational. Especially given that nearly 60% of incoming college students now don't finish their degrees. Thus, as Hilker notes "California is now considering making a community college degree mandatory before a student can enter a state university"

Thus, a student who can't finish a 4-year degree will now have an option, in most cases,  before s/he comes to the point of quitting. So rather than waste tens of thousands of dollars the student  will come away with something (A.A. degree or trade certificate) allowing them to economically advance.

Community colleges also provide a major economic solution because they can be accessed for half the cost or less of state universities, mainly because they aren't research institutions "where professors get big bucks for not doing much teaching" in the words of Hilker. This is also a boon given 51 percent of college students, according to a Brookings Institution study, don't even know how much student debt they will owe. (28 percent of entering freshmen don't.)

It is time for serious alternatives to four year colleges, if we are to get the massive student debt - now over one trillion dollars- under control.