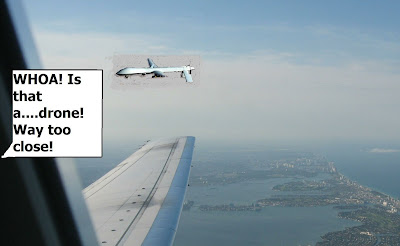 "I pointed out before, the drones should not be allowed to fly ANYWHERE - until ironclad regs are in place. And those regulations ought to demand that drones and drone operators obey the same rules as commercial aircraft. Yes, it is indeed a steep demand - but it is consistent with the peril and calamity of a drone-commercial aircraft collision. The precautionary principle itself demands drone operators prove their craft are safe - before they can fly at altitudes that imperil commercial craft."

It  appears now that the FAA is starting to take these near misses with drones seriously, and is considering enacting regulations at least as rigorous as I had in mind. According to The Wall Street Journal, the Federal Aviation Administration's long awaited rules on commercial drones - to be issued by year's end- is expected to require drone operators to have a pilot's license for unmanned aircraft. Also, these drone pilots will be required to keep drones in sight at all times.

Bravo! Because this is what's needed, but of course the Neoliberal media and its lackeys are squealing like stuck pigs.  (Or gored oxen who will no longer be able to pile up profits without oversight). And having drone operators with a pilot's license is no biggie, given these little beasties have no sense and avoid technology. Thus, the operator must be its eyes and this is why a license is needed.

"If the report is true (and the FAA is not commenting) the proposal would severely limit the rollout of commercial drones. It could even undermine the use of drones outside of heavily populated areas....where they would be the least controversial"

The Editorial goes on to note the proposals could still be "tweaked" by the White House Office of Budget and Management (which I for one would not advise)  and went on to note:

"Even so, the FAA's apparently ultra-conservative approach to unmanned craft - seven years after the agency declared the use of drones illegal without special waivers-  threatens U.S. leadership in a fast changing industry with tremendous potential to lower costs and increase productivity"

This echoed the whining of a Business Week piece- quoted by the Post:

"If regulators regard the person at the control as akin to a private pilot it would mean upwards of 40 flight hours at a cost of up to $10,000, limiting the pool of workers qualified for the job."

Too bad! It is equally critical - I'd say more so- to protect the lives of commercial airline passengers. After all, we are already prepared to have them stand in long TSA security lines to ensure a safe passage - on the outside chance some terrorist might try to bring a plane down.  So why the hell would we also not implement rigorous drone rules - to the same level as regs for commercial pilots - since the potential of a drone collision with a large commercial jet (say an engine) would be at least as catastrophic as a terrorist bomb? And let us recall again, from the released FAA report, there were 25 near midair collisions among 175  reported in the past 6 months by pilots and air traffic controllers near or in restricted airspace.

"The FAA's approach is often justified by reference to near-miss accidents that have occurred between manned aircraft and small drones. But those incidents are occurring because rogue drone owners are ignoring existing law, not because commercial drones are flooding the skies.."

Perhaps so, but it is also logical to expect if and when drones DO flood the skies, we will see a proportionate increase in rogue drone operators. If there are 400 now, there may be 4,000 in a "flood the skies" scenario - and if so, then the probability for a drone- commercial aircraft collision is enhanced.

Needless to say, I submit that the Neoliberal business model must take a backseat to protecting the flying public, in the same way we protect that public from terrorist attacks. Because in many respects, rogue drone operators are like terrorists - even if they lack an ideology. Thus, I applaud the FAA proposal and do hope they get it into the regulatory regime and with no other tweaks!