A Look At General Relativity and Tensors (Part 3)

4.    The Principle of Equivalence and Geodesics

Up to now, all the tensor descriptions have been for 3-space and we’ve not introduced time. But this deficiency must now be remedied as we provide for an extension and generalization of the Principle of Equivalence to incorporate the fact that the velocity of light is the same in all reference frames.
To put it into terms consistent with the examples seen in Part 1, a mass point carried by a gravitational field does not remain at rest but “falls down”.  More to the point, the path taken for this freely falling mass is a geodesic in space-time or a “world line” for the mass, i.e. described in 4 dimensions.

Thus, the formalism or representation must include changes in time and so the gravitational field is now given as a space-time tensor.  Unlike the tensors shown in the previous section, this one displays 4 x 4 components, as opposed to 3 x 3.

The reframed Principle of Equivalence therefore states that the equations of motion for this freely falling particle are expressed:

(where m,n, k = 1,2,3,4  for the four dimensions which are then displayed as: x1, x2, x3 and x4 – the last instead of t). It is important to point out that s, the interval, is assigned the dimension of time and hence is the proper time.  This is the time measured by a clock traveling with the mass particle.  By virtue of the definition and the above equation, the observer has a full definition of a curve traced out in space-time by a moving clock – which possesses an invariant form – and thus has a coordinate system for all events in the universe.

Let a light ray now follow this path and one obtains a null geodesic, i.e. 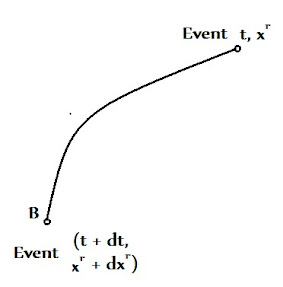 Let the upper end of the curve be defined by event of form  t, xr  and the lower extremity by event of form,  t + dt, xr  + dxr  Then for a clock traveling with the mass the proper time between the two events is zero – given the path is a null geodesic.  Hence:

However, for a clock at rest at position x1, x2, x3 the proper time elapsed between the events shown in the diagram is:

The distance between the two events exclusively in space coordinates is:

where c is called the velocity of light at the event (t, xr). Hence, we see it emerges as a universal constant and always takes the least time between two events, hence the path taken of a null geodesic.  This is consistent with the Einsteinian postulate – also given in special relativity – that the velocity of light has the same value at all points in space –time.

Thus we see that in order to include non-uniform fields the Principle of Equivalence can be reformulated – to a “strong” form,  to read[1]:

“In a small, freely falling laboratory, the laws of physics are the same as the laws of special relativity without any gravitational field.”

In the previous section we saw the coefficient  g44   appear for the expressions to do with proper time. But what is it?  This denotes the gravitational potential field given by a particular set of components, usually written as  g mn   for the tensor g.   We can now pose the interval introduced in Sec. 4. as:

For which it is convenient to specify special values of the potentials presented in “standard form” as:

Now, for flat space-time the values are all 0 except for those along the diagonal for which:

Thus, we see that the value of  g44     in the previous expressions is 1.  Writing out the interval form for the above is straightforward and one only needs to include the correct subscripts for the respective dx’s,  in each component, e.g.

We obtain the Riemann-Christofel curvature tensor:

Where the  g-values conform to those shown above and we find:

And the constant k is what’s called the Gaussian curvature.  It can assume values of 0 (Euclidean 4-D flat space), -1 (Lobachevskian space) or +1 (Riemannian space).

The Einstein field equations can be summarized in the tensor form:

Where the  T mn    denotes the associated  “stress-energy” tensor which incorporates internal stresses, the density of matter and its component velocities (u, v, w or in some texts: u1, u2 and u3).   From this one can see that if no matter is present, one would have:  G mn   =  0

The introduction of  K mn    to describe the matter-associated properties is generally attributed to Arthur Eddington[2].

We have then for the  T mn  : analogous to the g’s in standard form

Which again, is a vastly simplified presentation. It should also be said that radiation via  an electromagnetic energy tensor can also be included – given these will have the same rank as the T mn These components can thus be added to components of the mass energy tensor shown. In other words, the presence of radiation is taken to be equivalent to the presence of mass, given m = E/c2.

Posted by Copernicus at 9:24 AM