MIT physicist -cum-novelist Alan Lightman's new book , “The Accidental Universe: The World You Thought You Knew,” explores the way recent (and not-so-recent) discoveries and theories in physics and cosmology affect our take on the big questions. Often these happen to be questions he additionally explores in his novels, i.e. the meaning of life, the nature of morality, the importance of love and the general human condition including whether there is any ulterior 'purpose' to life.

Lightman's book is presented as a collection of essays but for me the one that struck the biggest chord was the first which gives the book its title ('The Accidental Universe - The World You Thought You Knew'). Therein, Lightman explains the emerging consensus among theoretical physicists that our own universe is only one among countless alternate universes, universes where the properties of matter and energy may differ significantly from our own. Physicists call this “the multiverse.”


Let's go back to explore more of the multiverse concept as it arises from M-theory. In the diagram below one begins with a zero-dimensional point particle. Let the particle move, say from point x1 to point x2 and it sweeps out a linear  (1-D) ‘string'. Take the 1-dimensional string and move it through space and it sweeps out a 2-dimensional band or what is called a p-brane. Take this p–brane and sweep it out in a perpendicular direction and one obtains a higher (p +1) dimensional world volume. 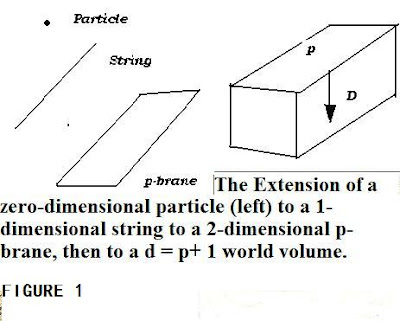 The quantitative description of brane phenomena is enormously complex and far beyond the scope of this blog, or even a small book. However, some simple insight and appreciation for the complexity can be gained by looking at the simplest brane of all, the D-0 brane consistent with the point particle. Without going into the details of obtaining the (fiber) bundle map, we require for completeness the tachyon field described by the expression for T(x) given in the upper right of Fig. 2, where the summation is taken from u= 1 to u = 9, with x_u the coordinates for the rotation space (group) R(9), and Gamma_u , the matrices needed. Then the tachyon field consistent with the above would be given by the small matrix expression in the upper right of Fig. 2. 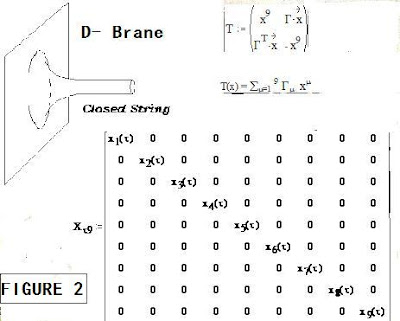 For a system of D0- branes,  parameterized by such matrices and defined by the given tachyon field (T(x)), we have a system of 9 x 9 matrices, defined by the large array shown in Fig. 2. Since the fields, and dynamics (as well as the tachyon field) are occurring at the level of the vacuum, that is the first place to start. Thus, to manipulate the D-brane in Fig. 2 it seems clear that energy consonant with a vacuum energy – or more exactly, a vacuum energy density- is needed.

The energy density attendant on vacuum manipulation must have some lower limit, estimated to be ~ 10 ^94 g/cm^3

I reiterate here that:

1) D-branes, by definition, are dynamical objects that can fluctuate.

2) The dynamical aspect is a result of the ability of D-branes to couple to closed strings (Fig. 2) Recall here that the latter embody a description of gravity and M-theory proper combines supergravity with Brane theory.

Now, I look at the simplified,  "uniform"  multiverse model - shown in the diagram below-  which might be considered a first iteration to a genuinely realistic multiverse model: 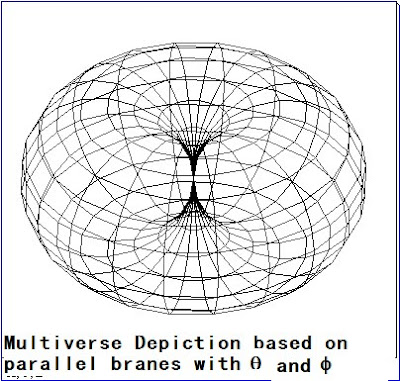 Each longitude circle is a quotient space q1 and each latitude circle is a quotient space q2. More exactly, q2 denotes the fifth dimensional connector that links multiple "parallel" universes, i.e. for the model shown. Each of these can be represented by one single longitudinal loop marking off a coordinate on q1 (e.g. Θ). Since time can be broken down in fundamental units of  Planck time or tau (τ) then each q1 is theoretically separated from its neighbor universe by one tau. This neighbor is impossible to access from within the fixed coordinate quotient space (q1) but can be accessed if one could find a way to get to q2 and traverse it. Thus, in simplest terms, each “slice” q1 can be regarded as an alternate or parallel universe within the multiverse. (Again, the model shown is only for discussion purposes and may not in any way correlate to the actual multiverse!)


More explicitly, one may adopt absolute toroidal (Θ,φ) coordinates to locate events in the multiverse system. There are a number of fascinating aspects of this model. First, the toroidal hypersphere implies an endlessly repeating universe that is the same in each new cycle[1] - instead of being different (i.e. with different physical constants as the reprocessed mode, e.g. of physicist John Wheeler demands). The key to this aspect is the fact that the radius R remains constant.

A second intriguing aspect is that the exact same point of space-time occurs for each "beginning" (Big Bang) and "end" ("Big Crunch"). This point is easily identified in the diagram as the most constricted part of the interior "hour-glass" shape defining the inner wall of the torus-hypersphere. Third, the overall configuration is exactly the same as that defined for the high-energy "twistors" used in the 1980's by Roger Penrose and his colleagues at Oxford.[2] The twistors are discrete points of space, each defined by 4 real numbers and 4 imaginary numbers.

The physical differences manifested via the generation of different universes in Lightman's generic  multiverse  (contrasted with the one I've depicted) would obviously be  much more significant , since each one would exhibit a  completely different assembly of 'universal' constants. Thus, no two component universes would be expected to be duplicates, given inherent differences, say in the fine structure constant, the Newtonian gravitational constant (G), and the charge to mass ratio for the electron, e/m.   Certain other factors, such as the critical ratio w (= (p / rho) = -1 ) would also determine the amount of dark energy in a given universe. Depending on whether w is a little bit greater or lesser — poof!- in one universe you have some degree of 'order' and matter, in another nothing. Thus,  there could well be an infinite, or nearly infinite, number of universes, in which there exists nothing but a cold 'fog' of evenly dispersed particles. In others, there may be only a single, tiny, infinitely dense point. In this milieu ours is merely one of a few universes configured so as to allow life.

All this implies that ours is an accidental universe, rather than  one that's emerged as a result of inexorable and inevitable set laws which have been discovered and understood by humanity. As the  Nobel-winning physicist Steven Weinberg put it, “We now find ourselves at a historic fork in the road we travel to understand the laws of nature. If the multiverse idea is correct, the style of fundamental physics will be radically changed.”

One might go so far as to even say the multiverse concept is transgressive at its core. As Lightman himself has put it, "the philosophical ethos of science is torn from its roots.” That ethos rests on the conviction that science is moving us toward a more and more complete understanding of the laws of nature and that “these basic principles are so restrictive that only one self-consistent universe is possible, like a crossword puzzle with only one solution.”

But if an infinite or nearly infinite number of self-consistent universes exist that all goes out the proverbial window. And the laws that may apply in our universe are as useless as a hammer without a handle in any other.

Needless to say, the multiverse also offers a refutation of the concept of Intelligent Design.  If an infinite or nearly infinite number of universes within it are merely cold, dark voids then wherefore the "designer"? In fact, he, she or it isn't needed at all because the very creation of the multiverse via vacuum energy in a spontaneous quantum fluctuation makes it redundant. But again, if the designer isn't evident in most of the cosmi, why the need to postulate it? Just so one of the infinite number of universes can be said to have one? That's totally ludicrous.

Yes, as Lightman has conceded (interview with salon.com), it may be very hard to test for, far less prove that a multiverse exists. But at least the concept offers a superior natural alternative to the supernatural bollocks spouted by diehard religionists.  In any case, a multiverse such as described is far easier to swallow (and based on rational -mathematical principles)  than an infinite Being who supposedly controls everything  and is everywhere, but yet is powerless to stop evil - whether  human (such as the beheadings of infants now going on in the Central African Republic)  or natural, such as the tsunami that killed over 200,000 in 2004..

-----
[1] This could also be interpreted as a "timeless" universe. See, e.g. Rucker, R.: 1977, Geometry, Relativity and the Fourth Dimension, Dover Publications, New York, p. 105. According to Rucker:"There is no last time around or next time around because nothing is moving...we feel that we are going through time but that is an illusion."

Posted by Copernicus at 1:15 PM