Will "Lone Nuts" Trot Out More Malarkey for the 50th Anniv. of JFK Assassination? 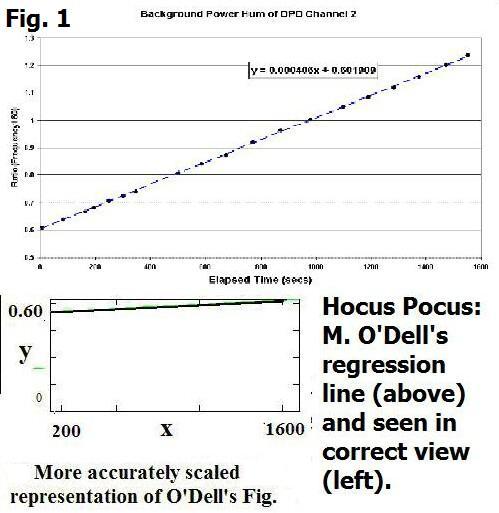 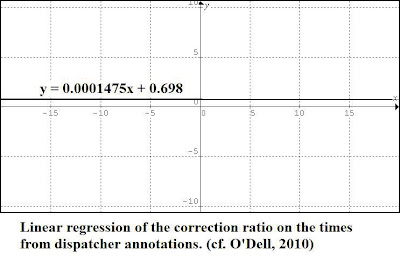 It seems the lone nuts, those who assert (after the Warren Report) that Lee Harvey Oswald was the sole assassin of JFK, just can't tolerate any evidence that disproves their farcical contentions. They will go to any lengths to try to show that any evidence is faulty, flawed, or disputable. A recent case is Michael O'Dell, who - in a paper on a known disinfo web site (of John Mcadams) tries to disprove D.B. Thomas Echo correlation analysis of the acoustic data published in the British journal Science and Justice in 2001.

In his paper, O'Dell makes much ado over a "60 Hz hum tone" that has already been repeatedly explained by others as evidence of copying. (Though as Groden and Livingstone point out, it could also arise from attempts to edit out any indication of a second or third gunman). O'Dell then performs a linear regression analysis which he claims takes this into account. (See top diagram of Fig. 1). The problem is that O'Dell doesn't even present the graph in its proper scaled perpsective, choosing truncated scales that make the line appear to have more gradient than it really does (see my correction)

Note there’s nearly a thousandfold factor disparity between the two scales in terms of units. (Another reason that his graph depiction shows only horizontal lines from the vertical axis and not vertical lines issuing from the horizontal, because he knows the latter would give it away since his one tenth increment spacing on the vertical scale is nearly 1000 times smaller than the same spacing shown on the horizontal, despite being shown nearly the same size) As for the hum tone, as Groden and Livingstone point out ('High Treason', p. 223):


“Every time a recording is copied, the copy will record an additional 60 Hz hum tone. The recordings studied by the HSCA have that extra hum tone, indicating they are the copies not the originals"

Thus, the 60 Hz tone was already taken into account. If the HSCA tape was really a copy from the original dictabelt recording it would also explain the voice-overs and other anomalies. O’Dell for his part used a regression formula to take the ratio of the given impulse signal to the 60 Hz tone, but in the end this is a vacuous exercise that sheds no insight into the actual issues.

To test the claim of the 60 Hz hum already being taken into account, I decided to perform a linear regression analysis of the O’Dell “correction ratio” (y) on the times (x) based on dispatcher annotations (see previous). If the relation was genuine and not spurious I reasoned that a clear correlation ought to manifest. The resulting least squares regression line is:


The plot is shown in the lower graph. This compares to O’Dell’s 60 Hz ratio regression line:

Note the slope in either case is essentially zero disclosing no kind of relationship whatever. This also means that O’Dell’s “correction ratio” linear regression:


is also useless. If, on the other hand, O’Dell’s correction ratio had provided an unbiased measure of time correction, we ought to have seen the regression as a straight line through the origin. A much more appropriate and correct regression equation would therefore be approximately:

Once more, the presence of error in y decreases the slope of the regression line. Where did this error originate? I suspect in the method used by O’Dell, in the form of systematic errors (and selection bias). As he describes it:

"A band-pass filter between 40Hz and 80Hz was applied and the hum measured where it was prominent. Cycles were measured where the waveform intersects the central zero line. Time markers were placed at the proper points to measure multiple cycles. The total duration of the measured cycles divided by the number of cycles is the wavelength at the midpoint of the markers.”

In his paper O’Dell argues this correction analysis was needed because of “distortions” in the Channel 2 tape speed, when played over the original Gray Audograph. However, it’s already been noted in numerous sources, e.g. Groden and Livingstone, op. cit., that such a voice-activated machine meant that implicitly there’d be “many gaps in the recording process”. Moreover, the FBI itself acknowledged the tape as being nearly useless because of repeated playing! Despite that, no gaps occurred in the Channel 1 recording which leaves open why O’Dell would be so obsessed with using Channel 2 data.

Using a “bandpass filter” for frequency corrections is a bit like me making kilometer corrections (along the orbits for differing radius vectors) to planetary distances when these won’t affect the distance in astronomical units! The gaps displayed in the latter (which conform to something called Bode’s Law) still remain. All one has succeeded in doing is juggling or interposing numbers, but the same distance gaps remain! Ditto with the gaps in the Channel 2 record, so one can’t help concluding that O’Dell is just trying to baffle with baloney! No wonder the same peer-reviewers of the Journal Science and Justice,  who published Thomas’ excellent paper likely wouldn’t give the time of day to O’Dell’s and why he was left to post it on John McAdams’ site.

As we approach the 50th anniversary of the JFK assassination this November, people need to be aware of the full court press which the lone nut brigade intends to mount.  Never mind that a clear majority (59%)  still disbelieves the Warren Commission Report - that Oswald was the sole assassin- this is down from the 73% it was barely a decade ago. In other words, the lone nut disinformation has begun to have its intended effect, including with nonsense such as the NATGEO production of two years ago, e.g. http://brane-space.blogspot.com/2011/11/nat-geo-continues-with-elites-kennedy.html

Make no mistake the lone nut disinformationists want it lower, preferably below 50% so they can brag on how a "majority of Americans agree with the Warren Commission". As a nation,  hopefully of critical thinkers, we can't let that travesty transpire. Look out, especially, for Tom Hanks' anti-conspiracy extravaganza due to be shown on HBO in 13 parts.﻿
Posted by Copernicus at 7:38 AM