Why Young People Are Losing Out on Jobs: Too Many Old Farts Still Working! 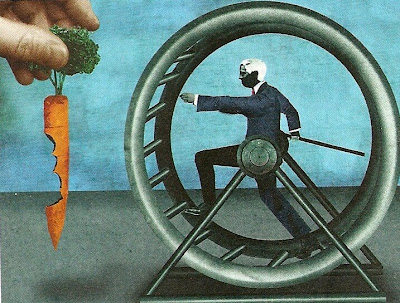 Question: In a low aggregate demand environment, where companies continue to sit on over $1.5 trillion in capital, and young people are struggling to find jobs, is it: a) better for the over 60 citizens to work longer, or (b) deliver more generous Social Security and other support benefits (i.e. earlier Medicare) to enable an earlier retirement so young people can get jobs?

Hint: It's not a trick question! The stats presented in a detailed article of the Business section of the Sunday Denver Post show that young people in the age range from 19-24 are being clobbered in the employment game, and because oldsters are staying on longer - presumably because they are (or feel) financially insecure.

According to the Post ('Young, Old Poles Apart in Shrinking Workforce', p. 1K), referring to Colorado (which stats are also shown to be extrapolated to most of the nation):

The Post piece goes on to note that since jobs bottomed out in 2009, after the financial meltdown a year earlier, "workers age 55 and older have claimed nearly 3 out of every 4 new jobs created in the U.S. according to the Center for Economic and Policy Research."

Wow! Anyone not see a connection here? I do. Let's see what sort of model is this? How about a zero sum game?  Given a limited (or shrinking) number of jobs, then every job claimed or gained by an elder person is a job not attained (i.e. inaccessible)  for a younger person. In general. Yes, there will be some exceptions, mainly is certain elite areas like software engineering where new college grads may have an edge over any oldster. But given that the overall quantity and quality of jobs has decreased in the whole country, it is clear that those employers are more likely to hire the older, more experienced lot than the younger. This means, again - in a shrinking or limited 'pie' of jobs, the young don't have a chance.

Well, not unless we can get the oldsters to retire earlier. But to do that they need to feel more secure about their chances not less secure!  This means more generous Social Security benefits, earlier access to Medicare, and absolutely NO cuts including the 'Chained CPI". Oh, it obviously also means dropping this rot about "working until 70". In that case, look for even more kids sitting in their parents' basements playing SIMS or whatever as they while away their time, interspersed by a few part time gigs if they can get them.

To see the Neoliberal press for working to 70, check out:

"Executives of the Business Roundtable are urging Congress to raise the Social Security and Medicare age eligibility to 70, from the current 67, and to adopt means testing for wealthier retirees, in order to keep the entitlement programs solvent longer-term"

"I think everybody needs to aim to work longer," says Alicia Munnell, director of the Center for Retirement Research at Boston College. "If everybody works about five years longer than they had planned, most people would find themselves with adequate retirement income."

But what is "adequate retirement income"? It isn't defined! (And note most Neoliberal sources - many fueled by the Pete Peterson gang, suggest $1 million needed to retire.)

Then, of course, there's the one percenters' favorite medium, FORBES:

"The Center for Retirement Research at Boston College reports in a new study titled: “National Retirement Risk Index: How Much Longer Do We Need to Work?”  that a whopping  85% of households would be prepared to retire by age 70."


The true fact is there'd be no need to demand or insist that the older citizen "work until 70" IF:

1) Congress stopped pilfering Social Security monies and using it for other nefarious purposes, like NSA spy "black budgets", or to appear to lower the amount of military spending

2) Congress paid back what it already pilfered, well over $2 trillion since 1983.

If all the above were done, then Social Security benefits could be increased, as per the current left-base initiative to do so, e.g.

Also, the potential for offering Medicare earlier - say to seniors aged 63 -64 could be considered. I cite these ages because they highlight the two years many near seniors need health insurance but the private market offers only outrageous choices, such as paying $15,000 a year for a high deductible policy you can't invoke until after you've spent $5,000.

IF these things were done, more seniors would feel comfortable leaving the work force earlier - thereby opening the way for younger adults to get jobs they otherwise wouldn't. In a shrinking jobs landscape, where technology alone is rendering tens of thousands more workers redundant each year, this is the only near solution feasible.

The tragedy is that any such changes, thanks to our bought and paid for (by Peter G. Peterson et al)  austerity politicians, are about as likely to pass as the chance aliens will intervene at the last moment and stop the U.S. from attacking Syria and instigating WWIII. (Yeah, and that attack - along with probably many more - will chew up even more "borrowed" Social Security monies!)

See also: http://www.smirkingchimp.com/thread/tom-engelhardt/51415/and-then-there-was-one-delusional-thinking-in-the-age-of-the-single-superpower
Posted by Copernicus at 7:22 AM