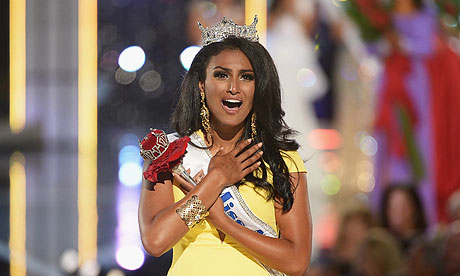 Miss America winner Nina Davuruli (Miss New York) after winning the crown on Sunday night. Sadly,  the racists have crawled out of their slime pits to savagely attack this beautiful woman.


Once again, the Neoliberal palaver that America is a "post racial society" (since Obama's election in 2008) has been put to the test and failed miserably after a racist troglodyte social media backlash following Nina Davuruli being crowned Miss America. What is it with these trash talking denizens? Can't they simply accept a beautiful, American-born woman and cease their endless hazing, and racist blather?

The other aspect is the degree of stupidity, again, illustrating the generically low IQs of the racists. One need only examine some of the comments made in the wake of the win, the first ever by a young woman with an Indian background. A sampling of the idiocy:

Uh, errrrr, how do we break this to you, Sparky? White women have dominated the pageant for "donkeys' years" - to use the Bajan  colloquialism. If you need some help, here's a Google hint: "White Miss America winners". Got that? Too complicated?

"If you're #Miss America you should have to be American," burped another on Twitter.

Uh, hate to break this to you, Einstein, but Ms. Davuruli IS an American, born in New York, USA with a birth certificate to prove it. Or, will you require her to publish it like you nitwits have demanded of Obama?

9/11 has nothing to do with the Miss America contest or the winner, you pathetic dope!

“Miss America is a terrorist. Whatever. It’s fine.”

No, it's not "fine" that yahoos like you are permitted out of their cages with access to Twitter accounts when they ought to be sedated or strapped into couches for administration of ECT.

@JAyres15: I swear I'm not racist but this is America


And I swear you are a racist, and since this is America, well, you're lucky to be able to exercise free speech to demonstrate your stupidity.

Clue one: she isn't  "Arab" or a "foreigner", morons - she's American. Clue two: Her background is Indian. You both need to go back to school. Third grade.


Blessed with class as well as beauty, the winner brushed aside the racial slurs,  negative comments.  This despite the fact that some dweezil somewhere out there in Blogger land will heap scorn on her and likely call her "jungle jook" something or other. Well, this is more or less what  one must expect of a person of limited vocabulary who actually scored a magnificent ZERO in the GRE  verbal aptitude test posted some time back (He got 1/20 in the quantitative).

"I have to rise above that. I always viewed myself as first and foremost American."

And you are, Nina, much more than you're calumniators.

My suspicion, and I admit it's only that, is that in the current hyper-aggressive, pseudo-patriot, military worship  culture (which also may have played a role in the recent mass shooting in D.C.- along with the availability of lethal weapons the NRA refuses to allow to be regulated) the favorite was a Kansan, Theresa Vail, an Army sergeant.  Want a good clue? Check out the Fox News & Commentary troll who  tweeted that “The liberal Miss America judges won’t say this – but Miss Kansas lost because she actually represented American values” and then crowned Davuluri “Miss Politically Correct America.”


Miss Kansas (Vail)  is also believed to have been the first contestant ever to openly display tattoos. Which must have driven lots of military racists nuts with approval- hence sent a proportional shock into their systems when she lost. See also:


Vail also had the Serenity Prayer on her rib cage, and a smaller military insignia on the back of one shoulder.   Vail won a nationwide "America's choice" vote to advance as a semi-finalist, but failed to make it into the top 10. Reason? Who can say? But it likely wasn't because she was white, but more plausibly the tats detracted from her overall presentation. Again, merely a hunch. (Personally, I can't stand seeing a beautiful woman with her skin laden with tats, but that's my preference.)


In a Twitter message on Sunday before the finals began, Vail wrote: "Win or not tonight, I have accomplished what I set out to do. I have empowered women. I have opened eyes."

And good for you, we applaud you.  But please now tell your (white, military)  followers to lay off Nina.

One thing we do know is that racism is still alive and well, as evidenced by the recent campaign  to attempt to limit showings of the film 'The Butler' - under the stupid, bogus pretext the film had Jane Fonda in it. How dumb do these fools think we are?  Obviously, the Fonda kerfuffle was merely a cover, a distraction, the REAL problem these racists had was with the historical presentation of the attacks on civil rights protestors in the South. They can't handle the real history but knew (most) it would be gauche to complain at this, so cherry-picked Fonda (cast as Nancy Reagan- which as TIME recently noted, was "an excellent choice").

Never mind. As the minority-ethnic  proportion in this country further increases, the racists will eventually recede into the dustbin of our history - hopefully sooner than later.