JFK and the National Security State (1) 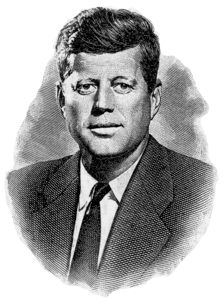 A mere day before the 12th anniversary of 9/11, and knowing what we do now about how the national security state expanded malignantly in its wake (including a $50 plus billion a year 'black budget'), it is instructive to see how JFK confronted the security state in his own time.

Even as we’ve learned (2 days ago)  that Obama and his  administration secretly won permission from a surveillance court (in 2011)  to reverse restrictions on the National Security Agency’s use of intercepted phone calls and e-mails, permitting the agency to search deliberately for Americans’ communications in its massive databases(according to gov’t officials and recently declassified material.)  one wonders what JFK would have done 50 years or more ago.


The answer is that JFK wouldn’t have done it! Indeed he harbored a deep distrust of the national security state since being betrayed by it (namely the CIA branch)  in the fiasco. Little known by Americans, “Operation Zapata” (aka 'The Cuba Project') was actually initiated and developed during the Eisenhower administration and pushed on Kennedy. (Telling him it was in “the national security interest” to do it). Awed by the conviction of an elderly president with 8 years in the Oval office, while he himself was a new-be, JFK took Ike at his word and paid the price.


Most of this didn’t come to light until the discovery of an internal CIA Report on the “Cuba Project”, which had been kept hidden for over 35 years.  The results were released under ‘The Bay of Pigs Declassified’.  It was actually based on the agency’s own internal audit and assessment of its behavior in respect of the event.


According to the declassified report, the Agency committed at least four extremely serious mistakes:


i)                Failure to subject the project, especially in its latter, frenzied stages to a cold and objective appraisal by the best talent available before submitting the final plan to Kennedy


ii)              Failure to advise the President, at an appropriate time, that the mission’s success had become dubious- and to recommend the operation therefore be canceled.

iv)             Failure to reduce successive project plans (dating back to 1959) to formal papers and to leave copies with the President and his advisors, to request specific written approval, confirmation thereof.


“The timely and objective scrutiny of the operation in the months before the invasion – including study of all available intelligence- would have demonstrated to Agency officials that the clandestine paramilitary preparations had almost totally failed and there was no responsive underground Cuban force ready to ally with the invaders.”


The commentary is even more critical of the CIA after noting (ibid.) that the Intelligence Board, the Office of National Estimates, and Office of Current Intelligence all provided clear warning that a careful reappraisal was needed.


“The choice was between retreat without honor and a gamble between ignominious defeat and dubious victory. The Agency chose to gamble, at rapidly decreasing odds.”

The consensus position of the Archivists is that JFK was misled by the Agency’s hubris and incompetence. Depending on the CIA for guidance as to intelligence about this operation – in preparation for more than two years-  the Agency blew it and big time. JFK took the blame, yes, but the CIA ultimately was responsible for not advising cancellation when they knew the near zero chances of success, had the opportunity to do so.

"The 150-page report, released after sitting in the CIA Director's safe for nearly three decades, blames the disastrous attempt to oust Fidel Castro not on President John F. Kennedy's failure to call airstrikes, but on the agency itself."


"The CIA's ignorance, incompetence, and arrogance toward the 1,400 exiles it trained and equipped to mount the invasion was responsible for the fiasco, said the report, obtained by the Associated Press yesterday."

"The document criticized almost every aspect of the CIA's handling of the invasion: misinforming Kennedy administration officials, planning poorly, using faulty intelligence and conducting an overt military operation beyond 'agency responsibility as well as agency capability'."

In the wake of the fiasco, and learning how badly he’d been played. JFK fired Allen Dulles – the then CIA Director after the and asserted his willingness to “smash the CIA into a thousand pieces and scatter it to the winds.” He also fired Charles Cabell, the deputy CIA director at the time and unwittingly laid the basis for the national security state to act against him.

Dulles was awarded a prime seat on LBJ's "Warren Commission" and essentially able to pre-vet and release only the information he deemed necessary.  Worse, his henchmen were (years later) disclosed rifling through the materials of the only real gov't branch to investigate the assassination - the HSCA in 1978. The most infamous case involved a spook named Regis Blahut, caught red-handed with some photographs he obviously intended to pilfer or alter. (See The Last Investigation,  by Gaeton Fonzi)

Meanwhile, Charles Cabell's brother, Earl, was the then mayor of Dallas. What better position to occupy to set up a motorcade route meandering through the concrete canyon of Dealey Plaza - enabling a classic triangulation scenario for assassination?

Next: How JFK learned he was no longer in control of the government.
Posted by Copernicus at 7:42 AM