A very important application of algebra is 's Universal law of gravitation. In one form it relates the force of attraction betweeb the mass of the Earth (ME), say, and a smaller mass m, on its surface,  at a distance equal to its radius r:


If we set the weight (w =mg) equal to the force of gravitational attraction, F, we obtain:


In other words, g is independent of the mass m on the Earth's surface. Now, what about objects actually orbiting the Earth, say like artificial satellites? In this case we understand that what keeps the objects orbiting is the centripetal (or center-directed) force, which is defined as:

Then to achieve an orbit (say circular of radius R = r + h where h is the altitude above the surface)) we need this centripetal force Fc to equal the force of gravitational attraction, F. Or:

But this can be simplified even further, using the result for g above, and also using the angular velocity w = 2p/T = v/R, so:


We call such an orbit geosynchronous or "geo-stationary" because the orbiting body retains an essentially fixed position above a point on the Earth and its motion (velocity) in orbit matches the rate of Earth's rotation.


The Newtonian gravitational law of attraction can also be extended to the Sun and any planet – say of mass m- in the solar system.  In this case, we may write:

where R is the distance between centers. Then:


which is just the Newtonian statement of Kepler’s Harmonic law.

Another intriguing application of algebra is to the deflection of an electron beam, say in a cathode ray tube such as shown. While it is true cathode ray tubes are seldom if ever used anymore, the example is still important in terms of how particles move in applied electric fields – which one may encounter, say in plasma physics. (Say with a charged particle encountering the Earth's magnetosphere.)


The illustration below is useful. 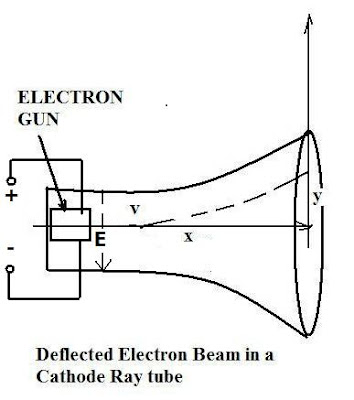 Deflection relates to the behavior of a beam of electrons when fired from an electron "gun" and through a defined field. The diagram accompanying shows the path of a beam through an electric field, E, set up inside a cathode ray tube.


Since the E-field is vertical (+ to -) as shown in the diagram, no horizontal force acts on the electron entering a region between the charged plates. Thus, the horizontal velocity component remains unaffected.


The displacement y in the vertical direction can be obtained from:

a = eE / me
Therefore, the vertical displacement can be written:

so it is clear the acceleration in this case is:  a = eE/ me


Meanwhile, horizontally, the distance displaced is:

x = vt so t = x/v
Therefore we may write, after substituting for t in the original equation:


Which the student should  easily see is of the form:


A special condition obtains when the electron just passes the plates (at distance x = D) so the value of y there is:


Then the time for transit between the plates, t is:

and the horizontal component of the velocity is:


If there’s one important equation form in Algebra II it’s the quadratic equation, of the form:

ax2 + bx + c = 0
which are then solved, either by factoring and solving for x, or - very often - by using the quadratic formula:

Many applied mathematical models can assume the form of quadratics, so if one can solve for them one can decipher the model.

Where f(x) is an empirical formula found to approximate the probability of a flare when a sunspot group is on or near the solar central meridian. Here: a = the proportion of largest sunspot area in the complex sunspot group or groups in relation to the total area of the complex groups., b = the number of delta class (complex) sunspot groups, and c = the total number of sunspots of large area (> 1000 msh or millionths of a solar hemisphere)  in the groups used for the formula.

Then how close to the central meridian are the groups?


Where the minus sign is take to mean the group has already passed the central meridian, and is now west of it in our line of sight. In this case the value of (-1.396) can be taken as days past central meridian, which means geo-effective flaring (i.e. causing short wave radio blackouts) is still possible.


Galilean relativity transformations are the prelude to Einsteinian special relativity. Manipulating the key quantities using algebra to get different transformational identities, is therefore a useful exercise to build algebra skills that will be needed later.


Basically, the interest is in how one transforms from one coordinate system, call it x, y, z to another, call it x’, y’, z’.  In the diagram below, for example, if systems S and S' are moving relative to each other,  consider a meter stick of length L (= 1 m) pointed in the +x direction and moving in that direction with velocity v. (We can also think of it as being at rest in the S' system with one end at x' = 0 and another end at x' = L', initially. ) 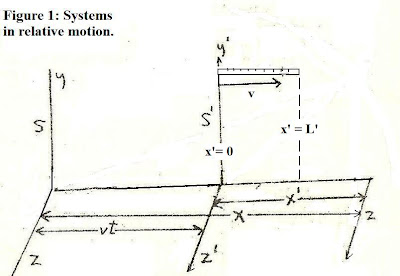 We  look for a transformation similar to the Galilean transformation, but which will allow c (velocity of light)  to be the same in both S and S'. Since the y and z coordinates of the position are not affected by the motion in the x-direction we can say y' = y and z' = z. For the x-coordinate, we try a transformation of the form: x = a(x' + vt') and x = a(x - vt), where a is an invariant (unchanged quantity)

We expect a to depend on the velocity v in such a way that it becomes equal to 1 when v becomes very small compared with the speed of light. When this happens, the x and x' transformations become the same as the ordinary Galilean transformations. We begin by using x = a(x' + vt') and solve for t' and obtain:

1.A beam of electrons moving with v = 1.0 x 107 m/s enters midway between two horizontal plates in a direction parallel to the plates which are 5 cm long and 2 cm apart, and have a potential difference V between them. Find V, if the beam is deflected so that it just grazes the bottom plate. (Take the electron charge to mass ratio: e/ me = 1.8 x 1011 C/kg).


2.A heated filament emits electrons which are accelerated to the anode by a p.d. of 500 V. Find the kinetic energy and velocity of the electron as it strikes the anode.

what do we get?


4. Let a quadratic model for central meridian transit of a sunspot group – indicating days past the central meridian (where the closer the value is to 0, the greater the incidence of likely flaring)  is:


Is this complex group more or less likely to see powerful flares than the one given in the example?


5. An athlete standing close to the edge on the top of a 160 ft. high building throws a baseball vertically upward. The quadratic function:

models the ball’s height above the ground, with s(t) in feet, t seconds after it’s thrown:


b)     How many seconds does it take until the ball finally hits the ground? (Round to the nearest tenth of a second)

6. Another form of ’s law of gravitation which incorporates Kepler’s third law is:

P2 = 4(p)2 a3/[G(M + Mp)].
where P is the planet's period, a the distance (i.e. semi-major axis, we want to solve for) and G the gravitational constant, M the mass of the Sun, and Mp the planet's mass.
Write an equation for the planet’s mass, i.e. which might be used to find it if all the parameters were known, and the units.


Add the following algebraic expressions and arrive at such a single rational expression:

NOTE:  Solutions to all the algebra II applied problems will appear over the next five days!
Posted by Copernicus at 8:31 AM