We continue examining more applications to elicit student interest in Algebra II. The great thing about these applications, to do with simple machines, is that most can easily be constructed by the teachers to achieve a hands on effect.  We look first at a simple pulley system: 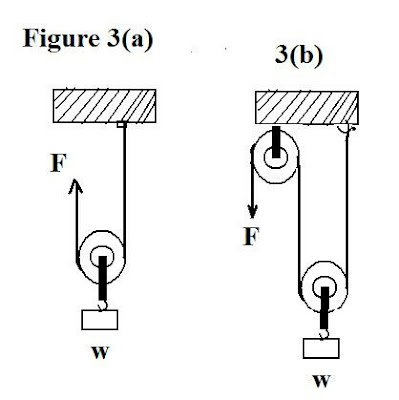 The pulley shown in 3(a) is a single movable pulley, in contrast to the Atwood machine which is a single fixed pulley. In operating such a pulley, say to lift a weight w, the force applied (F) must move twice as far as the weight w = mg. The mechanical advantage (assuming no friction) is s/d -  which is the displacement (s) of the applied force, how much it moves, divided by the distance (d)  the weight is moved. Since for Fig. 3(a) if the weight w is moved 1 m then the force F is moved 2 m. Thus, s = 2' and d = 1' so: w/F = s/d or F = wd/s = ½ w.

In Fig. 4A below, a variant of the earlier pulley system (a bit more complex) is depicted, called the "wheel and axle" (A) and we see also grouped pulleys (C) and multiplied strings(B). The wheel and axle is of particular interest in that it makes use of two different radii, an inner small one, r and a larger outer one R. If the depicted wheel (Fig. 4(A)) moves through one complete revolution, the distance the force will move is just d = 2πr. Meanwhile, the distance the force moves will be s = 2πR. If we take the mechanical advantage: M.A. = s/d = (2πR)/ (2πr) = R/r, then: 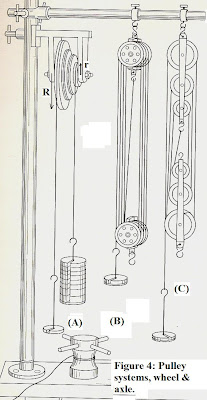 Example problem: In the wheel and axle device (Fig. 4 (A)) the radius r = 1 cm and R = 23 cm. Find the mechanical advantage and the applied force needed to lift a load of 80 N.
Solution:

In any verbal algebra problem (I or II) it is essential to identify the unknowns. In this case, we seek the applied force, F and the mechanical advantage, M.A. We also need to identify what we already know: thus load = weight = mg - 80N. R = 23 cm, and r = 1 cm.

The applied force F can then be obtained via the ratio relationship:


Lastly, we come to perhaps the most famous machine of all, the lever. Archimedes, the ancient Greek physicist and mathematician, is quoted as saying: "Give me a lever long enough and I will move the Earth!". A basic depiction of a workable lever is shown in Figure 5. 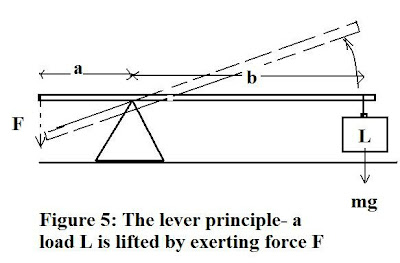 The lever principle is applicable to everything from figuring out where two people ought to sit on a teeter totter to achieve balance, to the respective distances of two stars in a double star system, from their mutual center of gravity.

Basically a load L is placed at one end which we wish to lift by applying a force F. Let the load be a distance a from the pivot, and the applied force acts at a distance, b. Then:

This is called the "law of the lever". It helps to illustrate using a simple problem how it works:

A 50 kg concrete block has to be moved from the ground to a wheelbarrow and a workman is provided with a board 5 m in length. If the workman pivots the block at 3.5 m from one end and lifts from the other (assume g = 10  ms-2 ) What applied force is needed to lift the block? What is the work done?

The work done is

1. a) In the grouped pulley system depicted in Fig. 4 (C) the force applied F will move 6 times as far as the load w. If the load has a mass of 40 kg, and assuming g = 9.80 ms-2, find the applied force. Thence or otherwise, obtain the mechanical advantage of the system. If the force F is applied through 10 m what is the work done? (Work is defined as the force times the distance moved, i.e. against gravity, or W = F x)


2. A man raises a uniform plank 12' long and of weight 40 lbs. until it is horizontal. His left hand is on one end of the plank and his right hand is 3' from the same end. Assuming both hands exert vertical forces, find the forces exerted by each hand to support the plank.

3. In the sample lever problem it is feasible to reduce the work done to only 125 J by re-arranging the lever distances (effort and load distance). Using a sketch show how could this could be done and give the new applied force in this scenario.

4. The "line of centers" for a binary star orbit, in reference to the center of mass x, is shown below:


5. The sum of masses for a binary star system can also be obtained using Kepler's 3rd law:

m1 + m2 = a3/P2
Using this, where a = the separation of the stars in astronomical units (AU) , and P is the period for their revolution about the center of mass in years, find P if: