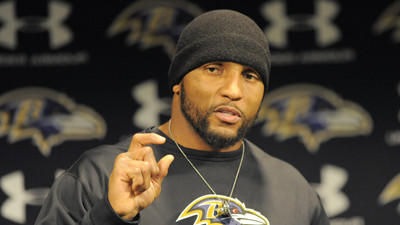 LB Ray Lewis did not appear in the NFL Kickoff Game in Denver  on Thursday night. Neither did over a half dozen other key players from the SB winning team.

Okay, let's discuss that 49- 27  beat down of the Ravens by the Broncos two nights ago. Let's begin by clarifying language. Contrary to some deluded Broncos' fans it was not "revenge" for the January playoff loss. The latter totally eliminated the Broncos from contention, it was "one and done". Broncos' fans wailed in disbelief because their season was terminated.....no more going on. Finito.  The game Thursday night did not eliminate the Ravens in any manner, shape or form since they have 15 more games to play and....can still get into the playoffs and even eliminate the Broncos in them like they did last year (after the Broncos beat them 34-17 in Baltimore)

In order to be revenge, the costs exacted by a Ravens' defeat would have had to be at least relatively equal in magnitude to what they inflicted on the Broncos in January. They weren't. The Ravens move on to next team - Cleveland, Broncos didn't move on at all in January.

Next, the Broncos did not "defeat the Super Bowl champs" other than nominally. The team they played was the Baltimore Ravens, sure, but radically remade from the team that beat the Niners in February. For example, a significant chunk of the SB champion defense was gone, including: LB Ray Lewis, LB Donnell Ellerbe, LB Paul Kruger,safety Ed Reed, safety Bernard Pollard, LB  Brendon Ayanbedejo. The offense also suffered several hits, with power center Matt Birk retiring, Anquan Boldin traded to the Niners for draft picks, Ramon Harewood (released) and tight end Dennis Pitta injured in preseason. Recall that Pitta and Boldin were key playmakers in the Ravens' playoff run.

"But hey! The Broncos' team changed too!"

Yeppers! But they weren't the Superbowl champs! Bear in mind a SB team is defined by its specific players- members not the team name.

Anyway, I could see the Ravens were going to lose Thursday night's game after two horrific injuries to offensive players: WR Jacoby Jones (who is also the team's return specialist) and Right Guard Michael Oher (made famous in the movie The Blind Side). Hideously, both injuries were "friendly fire" - each one a result of impact with one's own team mate.

Before I go on, recall Jones was the one responsible for the "Rocky Mountain Rainbow" - the killer catch that tied the January playoff game in regulation, see the play here: http://www.youtube.com/watch?v=FOeL1D8vMiI

Jones was about to field a punt Thursday night when teammate Brynden Trawick ran into him at the Baltimore 15. He ended up with a sprained knee and was knocked out of the game. This loss of Jones eliminated  one of the only reliable deep threats, and allowed the Broncs' secondary to gang up on Torey Smith, and Brandon Stokeley.

The loss of Oher was equally hellacious, a result of teammate Marshall Yanda being pushed into him by a Bronco defender. Oher is out with another ankle injury and we don't know for how long. Until the injury, Oher had been doing a good job keeping Bronco defenders out of Flacco's face and the run game had a chance to getting going.  With Oher gone, the run game collapsed and Flacco ended up scrambling or dodging a lot of the time.

Meanwhile, on the other side, the Broncos' Offense pretty well found a new weapon in monster  6'7" TE Julius Thomas.  Thomas ran through Ravens' defenders with ease scoring two TDs. The guy was simply too big to bring down.

Yeah, the game could have turned differently had Ravens' coach John Harbaugh tossed a red flag after a dropped ball by Wes Welker of the Broncos. The problem was the replay wasn't televised on the stadium's jumbo screen so Harbaugh couldn't be sure. He didn't want to lose a time out if wrong.  Still, one of the coaches had the responsibility of getting the info to him after seeing the network replay.  Had that been done, it would have been Ravens' ball. As it was the Broncs marched down to get a TD.

Another comment: Dallas Clark who was sure handed in his prime (at Indy), doesn't seem so now. He dropped five of 12 passes, including one sure TD (as he was about to cross  the goal line at the end of the half) and it slipped from his hands. Clark and other newcomer Brandon Stokely were to be the answers to a departed Boldin but from where I sat, it didn't appear they could replace anyone. Stokeley for his part was often out of breath and showing his age, like Clark.

The Ravens at least have ten days to recover and they might get Jones back by the game in Cleveland. In the meantime they are searching for other replacements, free agents, to fill the obvious  holes - but it won't be easy. As I told wifey after Boldin was traded, that might be the worst mistake the Ravens made. Boldin was a tough, high traffic receiver and the Niners now -because of nabbing him - will probably be the team to beat.

As for the Denver Broncos, congrats and hats off to them for taking the first game of the season, and getting a measure of ersatz retribution on Baltimore. Manning's 7 TDs were a Broncos' record and he could have had 8, had a knuckleheaded Denver safety, who intercepted Flacco,  not dropped the ball in pre-celebration before crossing the goal line for what should have been a pick six.

The Packers, my team, meanwhile face the Niners on Sunday in Frisco. It will be a good test to see if they can control Colin Kaepernick this time. Also if they can emulate the toughness the Ravens did against the Niners in the SB, and beat SF this time, getting a measure of retribution for last year's one and done.
------

Footnote: It shouldn't be necessary to say this, but those who've never played ANY sports in their lives - except maybe tiddly winks- have no business criticizing true football fans. One blogger dunderhead, it has come to my attention, seems to believe he's a football fan when: a) he's NEVER played the game in his life, and b) can't tell a punt from a kickoff and doesn't know a wideout from a tight end. He also evidently claimed he is a fan of "Dallas" and "the Broncos" - when he likely couldn't name the main Bronco (or Cowboy) offensive players without googling. He then apparently had the chutzpah to insinuate many of us (avid football fans) "never played a contact sport in our lives" when it doesn't matter - since most football fans haven't played football anyway - though I did at intra-mural tag level at Pace High. But this is hilarious coming from a guy whose only vested interest was in trying out for the cheerleader squad at Pace - when they wouldn't let him on the football team (after one materialized).  It's also amusing how he takes football fans to task for "gobbling brats, hot wings and beer" - when this little dork eats three or four whoppers every day - probably explaining most of his health problem and why he has to beg for $$$ on his blog.
Posted by Copernicus at 7:15 AM