Resolving Power of an Optical Instrument:

Among the more important applications of diffraction is the resolution of two astronomical objects in close optical proximity - or two sources in close physical proximity.  The diagram below (Fig. 3a) illustrates the problem for two sources and a single rectangular aperture. 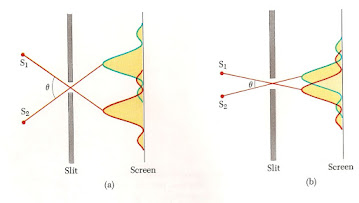 The resolving power or resolution of an optical instrument just means its ability to distinguish the images of two light sources very near to one another. In terms of application, it is the diffraction pattern of the sources via the aperture that sets the upper theoretical limit to the resolving power.

In Fig. 2 we have two lenses on either side of a rectangular aperture (slit). Two light sources  (left side) are detected which are very close together in the line of sight. These produce two diffraction patterns on the screen depicted as two overlapping intensity patterns (right side) . Note that the central maxima of the two patterns are separated by an angle a which is the same as the angle (q) subtended by the two sources at the slit center. Thus, for each pattern, the principal maximum just falls on the second minimum.

By referring back to the intensity distribution sketch (Fig. 1), we can see that the angular separation (from center to 2nd minimum) in either pattern would be equal to 2p. Since for a rectangular slit the resolving power may be expressed as:

Where n is the number of minima from the center, l is the wavelength of the light used and d is the slit width.

For visible light, l = 5.5 x 10 -7 m. In performing the calculation, care must be taken to ensure that l and d are expressed in the same units. For the case depicted in  the two sources are clearly resolved with the angular separation:

It shouldn’t be difficult to see that the degree of resolution deteriorates as one reduces the angular separation. Of particular interest is the case where a = p, corresponding to the condition a =  q1, for which the images are just barely resolved. This is known as the Rayleigh criterion and occurs when the central maximum of one diffraction pattern just falls on the first minimum of the other, or:

Having considered resolution in the context of the single slit Fraunhofer diffraction pattern we’re now in position to discuss resolving power as it applies to circular apertures.  Such a pattern is arrived at by rotating the single slit about its rotation axis leading to the result shown below: 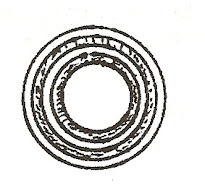 Note we again have secondary maxima and minima but these are now observed as concentric rings around a bright central disc. The latter is called Airy’s disk  after Sir George Airy, and is what the observer actually sees when he focuses his telescope on a distant star.

The expression for resolving power is analogous to that for the single rectangular aperture already considered. The chief difference is that n is no longer a whole number. In particular for the Rayleigh criterion:

Where D is now the diameter of the circular aperture. One can see from this that the separation of two light sources will depend very directly on the objective diameter D. The larger D the smaller will be q1 and hence the better the resolution.

To fix ideas consider the diagram below which shows two sources and their corresponding diffraction patterns for the Rayleigh criterion. 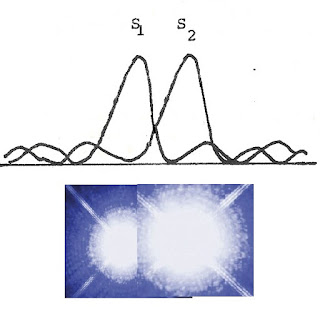 Fig. 4: Diffraction patterns for two  sources (e.g. stars) S1 and S2 at the Rayleigh criterion. Bottom view shows how they’d appear.
Here, one of the sources is on the principal axis and the other is off it. The diagram shows the intensity distributions and adjacent, what might actually be observed, say through a telescope.

1) Taking 384,000 km as the mean distance from the Earth to the Moon, find the smallest distance for the separation of two objects on the Moon’s surface that can just be resolved by the Harry Bayley Observatory C-14 telescope (below). 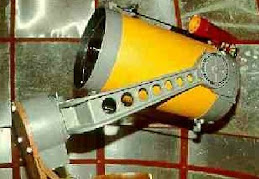 2) Find the diameter of an Airy disk in the focal plane of a refracting telescope featuring an objective with focal length of 1.0 m  and diameter of 10.0 cm.  Assume the effective observed wavelength is  5.5 x 10-5  cm.

3) The objective of a telescope has a diameter of 12.0 cm.   At what distance would two small green objects - 30.0 cm apart - be barely resolved by the telescope?  (Assume the resolution to be limited by diffraction for the objective only, and an effective wavelength of   5.4 x 10-5  cm.

Posted by Copernicus at 6:19 AM