Why I Don't Use (or Own) A Cell Phone 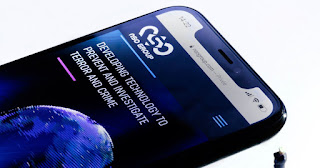 "But just in terms of our basic humanity, I find the idea that we should all be connected and contactable all the time not just bizarre but menacing. We used to think of electronic tags as a way of restricting criminals’ liberty – we can keep them out of jail but still keep track of them. It seems that now, everyone is acquiescent, through their phone, in electronically tagging themselves; incarcerating themselves in a digital jail where there is no such thing as true freedom or independence or solitude or privacy."  - Steve Hilton, Tech Startup Owner,  The Guardian

Most people who know me, know I do not use cell phones, nor do I like cell phones.  To me they are part and parcel of what's responsible for the fragmentation  of society - from creating angst and psychopathy in teen girls - with their overuse of Instagram-   to splitting people into their own screen 'universes' when they go out with each other.

Part of that has to do with the nature of the electronic beast itself which is to engender and sustain an addiction to constant connection.  People that use the damned things even fess up when you press them: "Well, if I am not looking at my cell or tweeting I feel like I don't exist.  If I am not being contacted, part of the loop I feel like I am in oblivion!"

Read that and tell me it's not pathetic.  I mean, does he own his cell or does it own him? Seems like the latter to me.  And given I cherish autonomy I don't wish to be owned by any device no matter how cleverly made or how much every other Tom, Dick and Suzy swears by them. I have never been a fan or follower of what's popular.

On the mechanical, interactive level alone cell phones are ridiculous. The screens are absurdly small so you can barely see anything. The keyboards are designed for infants or dwarves. One misplaced finger and you get gobbledegook.  Give me a desktop any day and I'm fine.

Steve Hilton -- owner of a tech startup - recently wrote in an op-ed in The Guardian on why he opts to not own a cell phone:

"The single thing that no one seems able to believe – the thing that apparently demands explanation – is the fact that I am phone-free. That’s right: I do not own a cellphone; I do not use a cellphone. I do not have a phone. No. Phone. Not even an old-fashioned dumb one. Nothing. You can’t call me unless you use my landline – yes, landline! Can you imagine? At home. Or call someone else that I happen to be with (more on that later).

When people discover this fact about my life, they could not be more surprised than if I had let slip that I was actually born with a chicken’s brain.

“But how do you live?” they cry. And then: “How does your wife feel about it?”

I remember the exact moment when I realized something important had happened. I was on my bike, cycling to Stanford, and it struck me that a week had gone by without my having a phone. And everything was just fine. Better than fine, actually. I felt more relaxed, carefree, happier. Of course a lot of that had to do with moving to California. But this was different. I felt this incredibly strong sense of just thinking about things during the day. Being able to organize those thoughts in my mind. Noticing things

Philip Reed,  Philosophy Prof  at Canisius College, has his own take on how the general population - the cell lovers if you will - perceive those of us who decline, and why he - like Steve Hilton - refuses to own one:

"It is mildly subversive and perhaps a little quaint when someone clings to their flip phone and refuses a smartphone. Refusing both kinds of phones is viewed as downright lunacy, especially if the person refusing was born after the mid-1970s. But I’ve never had a cellphone and I’m not going to get one. I have several reasons, and they are good ones.

The first is cost. No cellphone means no monthly bill, no possibility for an upgrade, no taxes, and no roaming charges (whatever those are). In an era of stagnant wages and growing income inequality, it is remarkable that people unthinkingly spend $75 or more per month on something that we hardly knew existed 15 years ago, much less counted as a necessity.

The second is concern for the environment. The manufacture of mobile phones (including raw material acquisition), the power they consume, and the energy used to transmit calls and access the internet all produce significant carbon dioxide emissions. The idea that cellphones are good only for a couple of years is widespread, increasing the number of phones that end up in landfills and leak toxic heavy metals such as copper and lead into the soil and groundwater.

The decisive reason, however, for me to refuse a cellphone is the opposite of everyone else’s reason for having one: I do not want the omnipresent ability to communicate with anyone who is absent. Cellphones put their users constantly on call, constantly available, and as much as that can be liberating or convenient, it can also be an overwhelming burden. The burden comes in the form of feeling an obligation to individuals and events that are physically elsewhere. Anyone who has checked their phone during a face-to-face conversation understands the temptation. And anyone who has been talking to someone who has checked their phone understands what is wrong with it.

Communicating with someone who is not physically present is alienating, forcing the mind to separate from the body. We see this, for example, in the well-known and ubiquitous dangers of texting while driving, but also in more mundane experiences: friends or lovers ignoring each other’s presence in favour of their Facebook feeds; people broadcasting their entertainment, their meals, and their passing thoughts to all who will bear witness; parents capturing their daughter’s ballet performance on their phones rather than watching it live; people walking down the street talking animatedly to themselves who turn out to be apparently healthy people using their Bluetooth.

The cellphone intrudes into the public and private realms, preventing holistic engagement with what is around us. Smartphones only perfect their predecessors’ ability to intrude.

The disembodying and intrusive effects of cellphones have significant implications for our relationships to the self and to others. Truly knowing and understanding others requires patience, risk, empathy, and affection, all of which are inhibited by cell phones. Cellphones also inhibit solitude, self-reflection, and rumination (formerly known as ‘waiting’ and ‘boredom’), which I think are essential for living a good life."

Every point and reason given above I can totally agree with.  Especially the fact those consarned devices discourage solitude or reflection.  They basically create a species of alienated, constantly distracted humans unable to escape their own electronic cages.  Worse, I am convinced these things are contributing to the fracturing of society by encouraging the spread of bunkum, odd beliefs and even conspiracy ideations. Which are then shared and re-shared endlessly, all in an effort to avoid being alone and thinking for once. In this respect I believe Prof. Reed also nails it, e.g.

"Long before cellphones, human beings were good at diverting themselves from disciplined attention. ‘The sole cause of man’s unhappiness,’ observed the French philosopher Blaise Pascal in the 17th century, ‘is that he does not know how to stay quietly in his room.’ This propensity for diversion was notably confirmed in a recent study where subjects preferred to give themselves electric shocks rather than occupy themselves with their own thoughts for 15 minutes.

Pascal believed that the height of human dignity is thought, and that the order of thought begins with oneself, one’s creator, and one’s end. He linked this kind of thought inextricably to genuine rest and happiness. Avoiding a cellphone allows, for me, space for thinking and so enables a richer, more fulfilling way of life. With fewer tasks to perform and preferences to satisfy, life slows to a pace compatible with contemplation and gratitude."

I doubt any long term cell user would agree with the above but that merely proves my case.  No confirmed addict ever wants to fully admit his or her addiction, not really. In this sense too, the obsessive cell phone user will always find excuses for the addiction: "Oh, I have to keep checking home to make sure Benny is okay.  He has an allergy to peanuts you know!"

I don't need such excuses given I never intend to own one.

Posted by Copernicus at 5:53 AM