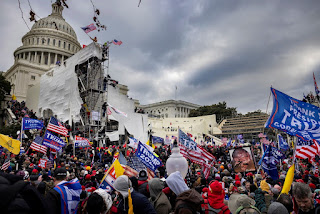 Trumper traitors want to be treated like BLM protesters.
Then why aren't they being given up to 5 years in prison?

The sheer gall of the Repuke pro-Trump traitors - including House members like Kevin McCarthy and Jim Jordan - is mind boggling.   Here we had McCarthy, day before yesterday, having the nerve to issue Mafia -like threats against telecom companies if they complied with House Select Committee subpoenas to turn in phone records of 11 GOP traitors.  (The committee  asked 35 companies to retain phone records and other information related to the attack  before the return of congress after its recess.)

This mega-Turd Traitor  speciously warned any such compliance would be against "federal law" and "subject to losing their ability to operate in the United States."  Adding:

Transl. A  Reepo "majority"  will stand with other American traitors and Trump lapdogs to try to impose their fascist will upon companies obeying a lawful subpoena.

Of course this is all bluff and bollocks given: a) There is no guarantee there will be any future Reepo majority given these traitor scum will have to face hours of  Dem ads before the midterms showing their violent insurrection, and b)  it is actually McCarthy's threats - as Rep. Eric Swallwell noted (yesterday on 'Deadline White House') - that rise to the level of federal crime and obstruction of justice for a lawful investigation.

This is also why today's WSJ editorial ('The Democratic Norm Breakers') is full of crap.  Claiming:

Critics feared that Speaker Nancy Pelosi’s probe of the Jan. 6 Capitol riot would be partisan, and the latest proof are subpoenas for the private phone records of House Republicans. This is a violation of political norms that Democrats will come to regret.

Oh, please, get over your fulsome selves!  Those are material records pointing to likely conspiracy between the grand Traitor Trump and his degenerate allies in congress.

But why be surprised?  Of course the WSJ has been soft soaping and minimizing the insurrection since Day 1 - with the exception of the occasional column from Peggy Noonan.

These editors also know - like the rest of us - that  McCarthy is crapping his pants because he knows (and they know) he's involved in sedition up to his eyeballs.  We know he spoke with Traitor-in-chief Trump on the day of the Capitol attack and also can be called as a potential witness in the probe.  He knows that too, hence the 'Goodfellas' posturing.

What was especially choice is this ragged ass rat bloviating about "standing with Americans."

But McCarthy and his fascist thugs don't  "stand with me" or with any of the 81 million Americans who support our actual laws and the Constitution.

The ones who need to be held fully accountable  are those on the pro-Trump,  pro -sedition,  pro-insurrection side.

But this is only one sorry aspect of the 'pukes continued efforts to sweep their crimes under the proverbial rug.   Or to whitewash the treachery of January 6th into a simple case of "political protest".  No it wasn't it was treason, pure and simple.

But given this  concerted GOP whitewashing effort, it's a common refrain from some of those charged in the Jan. 6 insurrection and their Republican allies to claim unequal treatment.  I.e.  The Justice Department is treating them harshly "because of their political views" while those arrested during last year’s protests over racial injustice were given leniency.

Horse manure given the court records tell a different story.

An Associated Press review of court documents in more than 300 federal cases stemming from the protests sparked by George Floyd’s death last year shows that dozens of people charged have been convicted of serious crimes and sent to prison.  In other words, the BLM protesters drew much more severe punishment and mainly for property crimes.

The AP found that more than 120 defendants across the United States have pleaded guilty or were convicted at trial of federal crimes including rioting, arson and conspiracy. More than 70 defendants who’ve been sentenced so far have gotten an average of about 27 months behind bars. At least 10 received prison terms of five years or more. NONE of the Trump scum traitors have received anything like that.

The dissonance between the rhetoric of Capitol insurrectionists and their supporters and the record established by courts highlights both the racial tension inherent in their arguments — the pro-Donald Trump rioters were largely white and last summer’s protesters were mostly Black — and the flawed logic  at the heart of their claims.  To wit that protesters trashing a CVS pharmacy is worse than trashing the seat of our government and attempting to overturn an election. As Ali Velshi explained on his Jan. 17  MSNBC show:

"For starters, the Capitol is not a liquor store. When a mob breaks the Capitol buildings windows it is not criminal mischief but an assault on democracy itself and decency. That's the point, violence must always be understood in context."

Indeed,  as I wrote in the immediate wake of the Jan. 6 domestic terror event:

"If it was a mob of Muslim terrorists they'd all have been shot dead, but not these white domestic terrorists - who held the Capitol hostage for hours, carrying their Confederate traitor flags, invading the Senate chamber, and the House."

Yet these traitors are being rehabilitated in memory as I write.  Ashli Babbit is now elevated to a martyr, despite being among the first to try to break into the chamber  - only  stopped by Capitol cop Michael Byrd's bullet (after he warned her).   Then the remaining  rabble are being depicted as  "political prisoners" as opposed to traitors who merit hanging.

In the words of Kent Greenfield, a professor at Boston College Law School in respect to the BLM protesters:

“The property damage or accusations of arson and looting from last year, those were serious and they were dealt with seriously.  But they weren’t an attack on the very core constitutional processes that we rely on in a democracy, nor were they an attack on the United States Congress,”

Janice herself pointed out if all those attacking the Capitol were black they'd have all been shot dead and there'd have been literal tons of heavy artillery in the streets.  In the actual case of these white terrorists let us note that had the National Guard not arrived in time,  many lawmakers might have been killed.    See e.g.

At least 11  GOP  House members are suspected to have colluded with Trump in preparing for the insurrection on January 6th.  But phone records and other materials are needed to corroborate it, hence the Select Committee's telling telecoms not to destroy phone records.  This is exactly why the maggot McCarthy is so petrified and why he's resorted to authoritarian thug- speak to try to intimidate telecom companies.   It is also why the Wall Street Journal editors insist in talking shit like (ibid.):

Republicans are furious, and rightly so. Indiana Rep. Jim Banks noted in a letter to Mr. Thompson that this “authoritarian undertaking” would depart “from more than 230 years of Congressional oversight.”

No, imps, they are 'rightly furious' because they damned well know they will be exposed as the traitors  they are - working in league with Trump!  The "authoritarian undertaking"  balderdash is also choice in trying to turn the tables on the proven Trump authoritarianism to project it onto the Dems.   But most intelligent Americans will see through this blather, despite efforts to misdirect and obfuscate, e.g..

Better fire your legal sources and hire better ones, asswits. Because there is NO speech protection for those who help to incite insurrection, or engage in sedition!

Meanwhile, the inquiring mind must ask why the WSJ is so hard bent to protect traitors, like Kevin McCarthy with his Mafia threats.

The despicable cretin Marjorie Taylor Green is no better, recently warning on FOX about shutting down the telecoms if they surrender phone records to the Select Committee. This on the heels of her FOX appearance stating those who advise others to get vaccines ought to be shot. Yet another reason this scurrilous traitor ought to have been hung by now with the others - especially the Johnny Reb turncoat Cawthorn.

Cawthorn spouted extremist and incendiary rhetoric about the Jan. 6 defendants and GOP claims about stolen elections.  This disreputable piece of dog dung actually called the Jan. 6 traitors -  who have been charged with crimes related to the Capitol insurrection -  "political hostages."   Further, proving he merits the gallows, he suggested breaking these vermin out!  In the words of this cockroach:

"The big problem is, we don't actually know where all the political prisoners are, and so if we were to actually be able to go and try and bust them out,"

The smarmy southern punk actually bemoaned not knowing the location of the jailed traitor rats, which prevented him and his ilk liberating them from federal custody.

Why isn't this POS behind bars?  Why isn't Matt Gaetz, Marjorie Taylor Greene and Kevin McCarthy?  Are we just going to allow them to descend to thug tactics and threats against the nation and Constitution?

Enough is enough.  Now all the renegade traitors like Madison Cawthorn, Jim Jordan, Matt Gaetz, Kevin McCarthy and Marjorie Taylor Greene need to pay a price.  Being hung, drawn and quartered for starters.  But for now we'll settle for expulsion from the House for sedition. 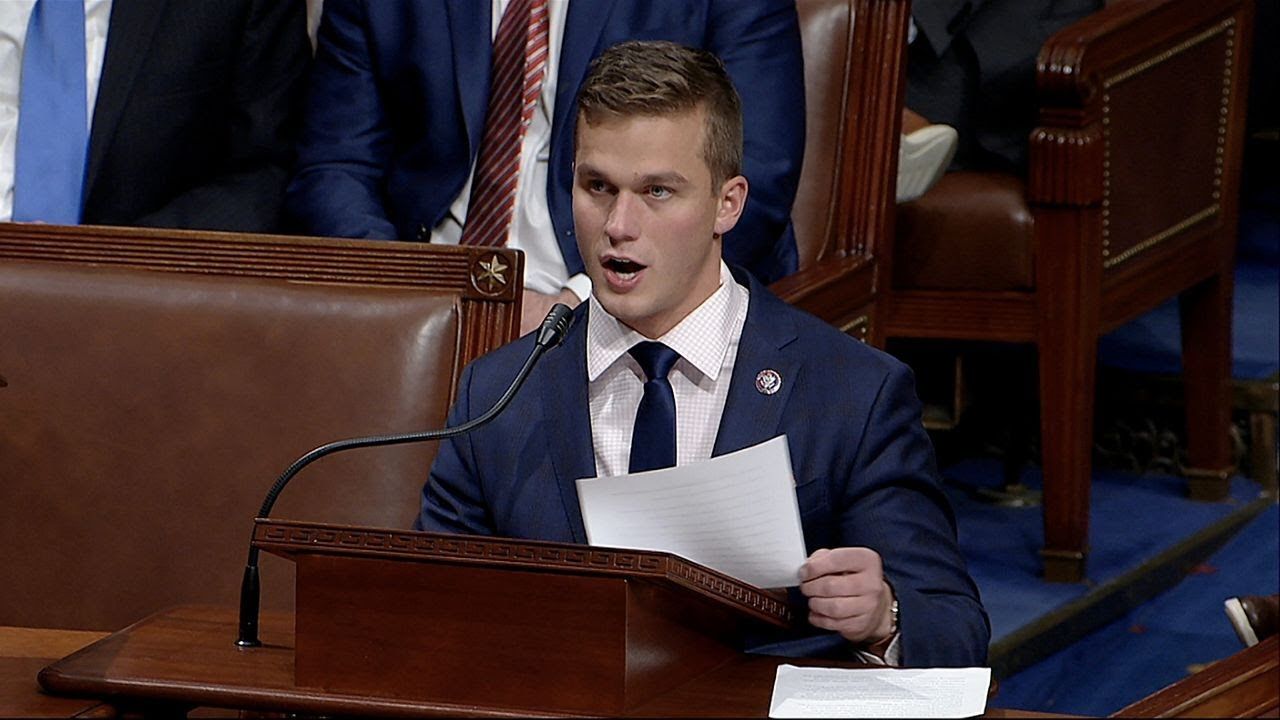 Posted by Copernicus at 7:17 AM