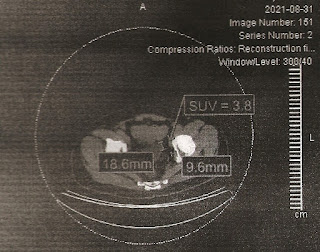 was finally delivered, see my own scan above.  (No they didn't deliver the full color image!)  To quote the urologist:  "This was kind of underwhelming".  Well, I had to agree.  Basically, what the scan showed was "suspicious nodal activity" at the left and right sides of the pelvis and the prostate. In other words, the cancer is still lurking and may be waiting to "pounce", i.e. metastasize to outside the prostate.  When I asked the urologist if this meant the results were questionable he was adamant that they weren't.   So "suspicious" activity definitely means real physical activity described as "focal uptake" at the sites.   Hence, "bimodal pelvic activity".

Let me back up to give a basic insight into how the radioactive tracer used (18- F -Fluciclovine)  generates an output. Basically the radiological process, e.g.

Detects any "activity" in the scope of the scan, and this activity is then interpreted as either cancer or non-cancer. For example, in the full published report that accompanied the scan it was noted:

"Activity at the neck appears physiologic"

In other words, benign, not significant.  Just ordinary. Yeah, I was swallowing multiple times during the 40 minute procedure.  Also noted:

"In the lungs, no abnormal uptake is seen.  There is no significant mediastinal uptake."

Transl. No  nodes are detected which could be cancerous.   Ditto with:

All of the above also explains why the lab tech - who phoned earlier in the day- reminded me that I was not allowed to chew any gum (say to alleviate the mouth dryness from 4 hours with no water).  When I asked why, she replied: "Because any jaw activity might show up as abnormal or cancerous in the scan"   Seriously ?  Yep, evidently so.

The scan only showing "suspicious" results as opposed to more definitive, say an actual prostate cancer 'met' - meant the treatment plan was more complicated.  In fact, the urologist suggested basically watching, testing and waiting to see if the PSA spiked (say into the 100s, which usually accompanies distant mets  - like in the lungs, brain, liver etc.) He also indicated the need for a genetic test to detect the AR -V7 gene which absence might allow for a milder treatment option than full-fledge chemo using docetaxel.

The PSA tests, meanwhile, would indicate any sudden spikes which could dictate a more aggressive treatment, say androgen deprivation.  The urologist's conjecture is that the currently low testosterone (below the baseline value of 294)  is "suppressing" the PSA and hence tumor activity, metastasis.  But if that suppression is halted, and the T shoots up then the PSA will too,  often to 200, 300 and more. (He even cited a case with PSA= 1500 and mets "all over")

He agreed that any treatment now would likely be worse than the disease itself given I am so far asymptomatic.  For example, many oncologists, urologists recommend another round of focal cryoablation - so a "salvage" procedure of a salvage procedure.  But there is a much enhanced risk of fistula which nobody in his right mind would want.

I readily concurred with his cautionary approach and said I will be happy to do watchful waiting along with the necessary testing, including an axumin scan each year.

(This post is contributed as part of prostate cancer awareness month.)