"You can’t invest at all without taking any risk. Even if you keep 100% of your money in Treasury bills backed by the U.S. government or bank accounts insured by Uncle Sam, that isn’t risk-free. You run the very real risk that, at today’s paltry interest rates, the income you earn won’t maintain its purchasing power. Net of inflation, you are highly likely to lose money.

That’s an involuntary risk, one that no investor in those assets can avoid. A long bull market, however, goads many investors into taking voluntary risks. They seek bets they don’t have to make."

This is germane now, as we learn the specter of "financial repression" has reared its ugly  head according to Charlie Farrell, writing in The Sunday Denver Post ('Financial Repression Is Crushing Retirees' (p. 1K).  Farrell makes the point that::

"The Fed is consciously driving up inflation and keeping interest rates low.  That means the price of everything goes up but the interest you can earn to pay for those things doesn't."

In other words, those on fixed incomes - most American seniors- are getting squeezed into penury.   As Farrell lays it out:  "Consider if inflation is 3 % and short term interest rates remain close to zero.  Over 15 years you will lose about half your wealth in terms of purchasing power."

Which prospect is truly frightening. Even more so when he delivers the strategy behind it: "This combination of low rates and higher inflation makes it easier to carry bigger deficits which is why the Fed  and most of our elected leaders like financial suppression."

Left unsaid is how those deficits came to be.  I will give a big hint in the following cartoon 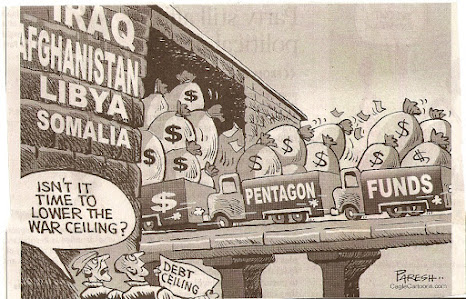 - and that was up to the point we'd accumulated $6 trillion in deficits in the ungodly "forever wars" - about which I will have more to write on Sept. 11th.   Anyway, Farrell's solution to the financial repression seems to be to invest in the stock market. After all, "historically there has never been a negative 15-year cycle in the stock market as represented  by the S&P 500 stock index."

True, but if such a negative cycle does occur - or even just a crash - it may take more time to make up the losses than most seniors have.  To get down to cases, a stock – or mutual fund- that drops in share price from $20 to $10 has suffered a 50% loss. But for that share price to return to $20 it must gain 100%, or double. This may take not just two or three years, but more than ten.  Hence, it's easy for Farrell to argue you are "more likely to build wealth if your are more aggressive."    Maybe but you are also more likely to lose it in a crash or extended downturn.  Cat food anyone?

"The S&P 500 has closed at new all-time highs 54 times so far this year, making it seem almost as if the market will never go down again. And people often take more risk when the environment around them feels less risky.

You probably feel safer riding your bicycle fast if you’re wearing a helmet. You’d be more inclined to take curves on a mountain road at high speed in a sturdy SUV than you would in a compact car.  The Covid crash of early 2020 has reinforced the sense that markets are safer now. After that 34% collapse, stocks hit new highs again only 126 trading days later.

That’s made it all but impossible for most of us to reconstruct how afraid we were only a year-and-a-half ago. We see the past through a rearview mirror made of rose-colored glass. Brushing aside our losses creates a false bravado that makes us think we can weather the future with less fear than we suffered in the past.

To stay out of trouble, ask yourself whether you are taking risks you don’t need to.

Also ask: Is this a risk I need to take? Imagine making 10 times your money on an investment. How would your life be different? If your answer is a shrug, then the risk isn’t essential. Now imagine losing everything. Is the trade worth making at all?

Finally, ask whether it’s a risk you understand. Who’s on the other side of this trade, and why are they willing to let you make money? In a severe bear market, you’re often trading with someone who has to get out or go broke so you may have the advantage. In a bull market, it’s often someone who knows more than you do."

Good  advice, Jason! But how many will be prepared to take it?