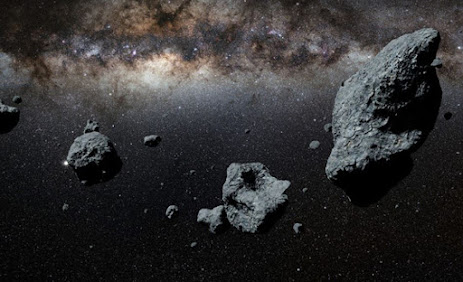 Unbeknownst to most people  thousands of tons of extraterrestrial material pummel Earth’s surface each year. The vast majority of it is too small to see with the naked eye.   We call these meteorites, one sample of which I have in my hand now.  (From a geological collection purchased from Edmund Scientific Co. more than 55 years ago.)

In astronomy texts of the mid-20th century the standard origin account for meteorites - and the meteoroids from which derived - was that they arose from successive collisions between asteroid fragments in the asteroid belt.  From the 1964 text 'Exploration of the Universe' by George Abell (p. 367):

"The numbers of particles of various sizes appear to fit the distributions we would expect to result from some breakup process like rock crushing. Collisions between a few larger bodies would be extremely rare, however once a collision occurred  and formed a larger number of smaller bodies, subsequent collisions between them would be more likely.  As the breakup continued, collisions would become increasingly frequent accelerating the fragmentation."

The text goes on to cite research showing that the chemical composition of various meteorites discloses that the abundance of gallium and germanium in iron meteorites "is found to be strikingly identical in meteoritic samples collected in very different parts of the world"   Adding:

"Here is strong evidence that several different meteorites could have originated from the same body -that is, that fragmentation is indeed taking place."

Has anything changed since the account in that Abel  textbook? In a new report in Eos: Space Science   we learn that researchers have found that the amount of extraterrestrial material falling to Earth has remained remarkably stable over millions of years.  Interested blog readers can find the publication of Schmitz and Terfelt's research here:

Schmitz, a geologist at Lund University in Sweden, remembers the first time he looked at sediments to trace something that had come from space. It was the 1980s, and he was studying the Chicxulub impact crater. “It was the first insight that we could get astronomical information by looking down instead of looking up,” said Schmitz.

Inspired by that experience, Schmitz and his Lund University colleague Fredrik Terfelt, a research engineer, have spent the past 8 years collecting over 8,000 kilograms of sedimentary limestone. They’re not interested in the rock itself, which was once part of the ancient seafloor, but rather in what it contains: micrometeorites that fell to Earth over the past 500 million years.

The pair used successive baths of strong chemicals (hydrochloric acid, hydrofluoric acid, sulfuric acid, and nitric acid) to dissolve the rock in a specially designed laboratory.  The process basically isolated the extraterrestrial material from the meteoritic through 15 different time windows spanning from the Late Cambrian to the early Paleogene.  According to Terfelt:

"The reaction between pyrite and nitric acid was quite spectacular."

This after black smoke filled their laboratory’s fume hood.

The chemical barrage left behind grains of chromite, an extremely hardy mineral that composes about 0.25% of some meteorites by weight.

Schmitz and Terfelt found that over 99% of the chromite grains they recovered came from a stony meteorite known as an ordinary chondrite. This was perplexing,  not only because Abell doesn't mention it but because asteroids of this type are rare in the asteroid belt, the source of most meteorites. In the words of Schmitz quoted in the Eos piece:

“Ordinary chondritic asteroids don’t even appear to be common in the asteroid belt,”

One implication of this finding is that most of Earth’s roughly 200 known impact structures were likely formed from ordinary chondrites striking the planet. In the words of Schmitz, echoing Abell's textbook account: “The general view has been that comets and all types of asteroids were responsible.”

When Schmitz and Terfelt sorted through the 2,828 chromite grains they recovered by age, the mystery deepened. The distribution they found was remarkably the same except for one peak roughly 460 million years ago. Schmitz again:

“We were surprised. Everyone was telling us we would find several peaks.”

Unlike Abell's (and also Sir Fred Hoyle's account in 'Astronomy & Cosmology') perhaps asteroid collisions need to occur in a specific place for their refuse to actually make it to Earth.  This hypothesis was proposed in the Proceedings of the National Academy of Sciences of the United States of America paper - link given above.

So-called “Kirkwood gaps”—the areas within the asteroid belt where the orbital periods of an asteroid and the planet Jupiter constitute a ratio of integers (e.g., 3:1 or 5:2)—are conspicuously empty. Owing to gravitational interactions that asteroids experience in these regions of space, they "tend to get flung out of those orbits"  in the words of Philipp Heck, a meteorite specialist at the Field Museum of Natural History in Chicago. Adding:

Heck added, in respect of this new work:

"We’re gaining a better understanding of the solar system by studying the relics of asteroids, its oldest constituents. But this analysis should be extended to other types of meteorites that don’t contain chromite grains, he said. This method only looks at certain types of meteorites. It’s far from a complete picture.”

I believe that both George Abell and Sir Fred Hoyle would both concur.