Time to Stop Looking to Reagan for Answers or Inspiration 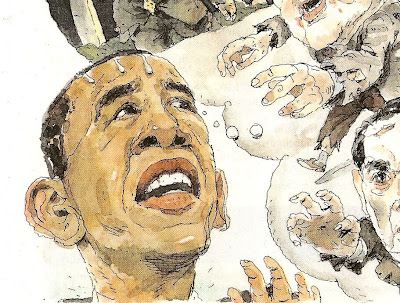 How Obama is perceived by his base, in terms of the Republican hostage-takers. He needs to change that image and reading books on Ronald Reagan is NOT the way!


We understand (compliments of his aides) that President Obama is currently reading the biography “President Reagan: The Role of a Lifetime,” by Lou Cannon, as holiday fare. WHY? What does a Dem President – ANY Dem President- have to learn from a nitwit like Ronnie Raygun, who single-handedly converted this nation from a global creditor to its foremost debtor by running up more than $2.2 trillion in debt from reckless military –defense expenditures (think $75 hammers, $3500 toilets)

Reagan, recall, is the character who once opined that in an emergency, “submarine-fired missiles could be recalled”.

This is the guy who single-handedly destroyed the Trade Union movement (and back bone of the Democratic party) by firing 12,000 air traffic controllers, a move that's taken that industry the better part of two decades to compensate for, with hundreds of “near misses” along the way.

Reagan is also the shameless cretin who pulled critical social spending as he sliced taxes to their lowest levels in history (also helping to fire up the deficit) – leading to more than a half million mentally ill patients being tossed out of their hospital beds. Where did they end up? Most found themselves on the street, while the lucky few managed to somehow survive.

Why Obama has this fascination and obsession with Reagan is beyond me. Recall Obama is also the guy who heaped praise on Reagan during his 2008 campaign as “the transformational president” he most wanted to emulate. Bull pockey! Reagan was transformational all right – in converting this nation from a once respected multilateral diplomacy-driven, global icon of democracy to a war-mongering, Empire building, mammoth deficit and inequality creating pariah on the global scene.

It is incredible, really, that a guy with the purported high IQ of Obama could find a dunderhead like Reagan so worthy of any kind of remote thought. He needs to be mindful that it was none other than Reagan who stoked the "lizard brain" of his countrymen into a greedaholic, 'he who gets the most toys wins' and 'devil take the hindmost' mentality.

It was neurobiologist Robert Ornstein, in his book New World, New Mind, Paladin, 1991, Ch. 6 'Outgrowing the Tooth Fairy', who pointed out how an affable and easy manner - associated with the 'avuncular' manner of Reagan- was perfectly able to discombobulate otherwise sober minds and misdirect them. Also, de-activating their critical reasoning centers in the neocortex.

In his early pages, Ornstein notes how the "old (Lizard) brain" of a nation or people can be ramped up and reinforced if its leaders also display and act on their own 'old Mind' predjudices, beliefs, etc. For example: p. 172:

Ornstein notes Reagan's 'avuncular' persona and smile essentially disengaged most Americans' critical thinking centers - making it much easier to believe the "morning in America" pap and swill he was busy feeding them. Never mind the half million tossed into the streets from mental hospitals, the conversion of the U.S. to the world's foremost debtor and so on. The populace' old Mind was its own worst enemy in perceiving the very real damage Reaganites were perpetrating, starting with his tax cuts - which bled down essential revenue for domestic needs - effectively reinforcing Reagan's "government is the problem" mantra.

Orstein additionally points to the (then) 'Star Wars' program as yet another example of 'old Brain' workings (p. 169):

"The Star Wars program represents the continuation of a mind blindness to trends that have long made military thinking one of the clearest examples of old min functioning. The rigid, unimaginative training of those who choose military careers apparently reinforces the brain's natural tendency to focus on the immediate and the near term and especially, to count on the environment to remain unchanged. So obvious is this effect that the comment that 'generals are always preparing to fight the previous war' has become a text book commonplace"

Feeding into the old Lizard Brain's propensities is the patented American tradition of "faith in the future" and blind optimism, brought to a pinnacle by Reagan - again - by pushing his patented smile and consummate actor-PR skills (p. 175):

"Memories are transformed to suit our attitudes, and they are transformed in a way that helps the blinkered mind get on and succeed in life. We tend to remember not how difficult our past life has been and often hold a simplified optimism about our family and work history, and our past in general. These healthy illiusions (95 % of people, for instance, judge themselves as 'better than average' in intelligence and life satisfaction) probably evolved to ease the pain of childhood experiences and to reduce the effect of the past on our lives. But these same caricatures when applied to current political depictions often lead to dangerous comparisons"

"Perhaps the most serious political problem faced by society is the attraction of the old Brain of the public to old-brained leaders. It is a problem that plagues all nations, and both the Democratic and Republican leaders of the United States.

This administration encouraged the public's chauvinism when a new-minded administration would have worked to reduce it. For example, the administration concentrated on finding short-term solutions to economic problems with little or no thought on their long term consequences."

So again: exactly WHAT would this Lizard-brained, former actor reprobate have to offer to Obama, a putative New-brained person, for a New Age?

What novel insights can a book on Reagan possibly have to offer a man whose IQ probably is 50% higher?

I can't fathom it! I can't even fathom why an ostensibly smart president would even let it be known he's consuming biographical pap on Reagan - especially when his base is already highly suspicious of his motives, and whether he'll chuck them under the proverbial bus in his 'State of the Union' speech. (Perhaps by proposing novel cuts and "adjustments" to Social Security following on from the proposals of his "Deficit Commission". ) Is he trying to show he has mental "bipartisanhip" and "objectivity" that he'd read a book on one of the most detested (by liberals) Repuke warmongers and shameless PR manipulators to ever sit in the West Wing?

Obama is already pictured (see graphic) by most of his (2008) electorate coalition as a terrified, Neoliberal sellout (never mind all the legislation he's recently signed - as many believe it arrived via a promise to the repukes to sell out and compromise even more starting in January) who stands for nothing on principle. Thus, reading a book by the archetype Repuke who augmented the Neoliberal brand (including inciting its copying by Dems and the DLC) is hardly a feather in his cap.

One thing of which we may be sure, the eyes of his base will be closely following his every move during the next two years, starting with his State of the Union and proposed budget and spending bills. Then further on - to whether he allows the Repukes to hold him and the nation hostage again, in terms of raising the debt ceiling in March (or capitulating to reptile demands fof spending cuts to domestic programs to do so) or - in 2012 - capitulating again to extend the Bush tax cuts for 2 more years, or permanently.

All of these in combination will decide whether Obama gets a 2nd term, or ends up a one-termer like Carter. Make no mistake here, no amount of covert Reagan worship will help him secure Independents, nor will more faux compromises with little fight. He will have to demonstrate his mettle credibly to his base or see that base not show up in November, 2012. Which will translate to an even greater electoral debacle than the one last month, since it is the BASE that will make the difference not the Independent (presumed "moderate") know- nothings. (As Jim Hightower once quaintly put it, "the only thing in the middle of the road are yellow lines and dead skunks".)

We would like to see Obama succeed, obviously, since he'd be preferable to Palin, or Romney or god forbid- Baptist preacher Mike Huckabee. But he also has to understand he has to help himself! To that end, he needs to show more balls, more outspokenness and more FIGHT! More reading JFK's Profiles in Courage, and less any tripe or pap on Reagan!
Posted by Copernicus at 9:50 AM