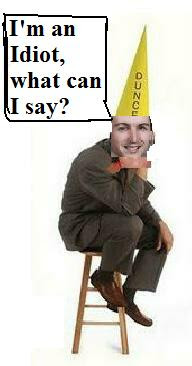 It seems now over-achiever Jason Lisle isn’t content to peddle his gibberish about an “astrophysical” basis for a “young Sun” and a universe only 6,000 years old. Now he wades into an attack on atheism and unbelief in general – using the same sort of faulty reasoning that I exposed earlier to do with his “astrophysics”:

I will also expose why Lisle’s brain is probably defective (along with those of other believers) in my upcoming blog on the Orientation and Activation Area of the Brain. But let’s look at a few of Lisle’s dubious comments posted as part of a guest article in Pastor Perplex’s dubious blog:

“Why should there be a law of non-contradiction, or for that matter, any laws of reasoning?”

Here he is unable to recognize that "a law of non-contradiction" is only relevant to Boolean or classical logic. If I am in this room typing this I cannot be out of the room typing it at the same time. According to classical logic. But as I showed quantum logic refutes this, as in the case of the electron two-slit experiments in which an electron can go through slit A and B at the same time.
Readers will see a more exhaustive discussion here of the basis for quantum logic:
http://brane-space.blogspot.com/2009/09/foray-into-quantum-logical-and.html


In the quantum logic context the binary{0,1}-valued observables may be regarded as encoding propositions about properties of the state of the system. Thus a self-adjoint operator P with spectrum contained in the two-point set {0,1} must be a projection; i.e., P^2 = P. Such operators are in one-to-one correspondence with the closed subspaces of H. Indeed, if P is a projection, its range is closed, and any closed subspace is the range of a unique projection. If e is any unit vector, then = Pe^2 is the expected value of the corresponding observable in the state represented by e. Since this is {0,1}-valued, we can interpret this as the probability that a measurement of the observable will produce the "affirmative" answer 1. In particular, the affirmative answer will have probability 1 if and only if Pe = e; that is, e lies in the range of P. What all this means is that the “universality” of a concept is a moot issue. It has no meaning or significance in the setting of quantum mechanics and quantum logic.
To be more specific, the formal apparatus of quantum mechanics reduces to a generalization of classical probability in which the role played by a Boolean algebra of events in the latter is taken over by the "quantum logic" of projection operators on a Hilbert space. The usual statistical interpretation of quantum mechanics demands we take this generalized quantum probability theory quite literally -- that is, not as merely a formal analogue of its classical counterpart, but as a genuine doctrine of chances. But leave it to a crank like Lisle to deliberately confuse the obvious and thereby lead certain pastors into thinking they’ve made some case against atheism.

From this Lisle goes on:

“The Christian can answer this question. For the Christian there is an absolute standard for reasoning; we are to pattern our thoughts after God’s. The laws of logic are a reflection of the way God thinks. The law of non-contradiction is not simply one person’s opinion of how we ought to think, rather it stems from God’s self-consistent nature”

But again, this is rubbish. First, Lisle hasn’t given us even the most cursory definition for his God – Christian or otherwise. So how can we know what faint attributes or properties it possesses, far less what any absolute standards are (assuming they exist) or how they’d manifest?
Second, note:

i) Lisle's not defined what exactly 'God' or `supernatural' means

iii) He uses circular arguments to return to his original claim.

Hence, he is trapped within the realm of meta-statements unable to describe anything outside themselves. Or, highly inaccurate (and improbable) claims, statements issuing uncritically from ancient scribblings.

To escape a Godelian loop, the supernatural-vitalist is obliged to: i) Provide operational definitions for his terms ("God", "soul", "supernatural" etc.) , at least ii) Provide one single construct based on (i), showing how this construct makes use of the definition, iii) Provide a single percept or perceptual FACT that would even allow for it to be compared to a scientific hypothesis- say to explain the same phenomenon. (Energy might be a starting concept here)

But Lisle does nothing, merely makes a bald, unsupported statement.

Applying this to the ontology of "non-contingent entity” which demands an “absolute standard for reasoning”, it must be shown it exists independently of being thought of or verbally articulated. (E.g. there must be the case of divine existence independent of the existence of human brains which might get tempted to confabulate it.)Here's another way to propose it: If one demands that this entity (G-O-D, see also my review of David Byrne's book by that title) is not susceptible to independent existence, and therefore the mere announcement or writing of the words incurs validity, then the supposed condition has nothing to do with reality. It's like averring we all live inside a 12-dimensonal flying spaghetti monster and must obligingly follow Its patterns of thought. I'd be laughed into oblivion for saying such, especially as I incur no special benediction.

In effect, if the proposed "non-contingent entity" isn't subject to independent existence, then its alleged "truth" is separated from verification. Truth then becomes what is communicated to us by proxy (or proxy vehicle, e.g. "sacred" books of revelation, or the odd speaking in tongues) with the existent (abstraction "G-O-D") in the mind of the communicator who deems himself qualified to make the "truth" exist.But such a "truth" is fraudulent and cannot be a valid expression of the condition. What it means is there is little assurance the communicated secondary artifact has all the elements and particulars needed to be an affirmed REAL entity.

The truth is dispensed according to our needs (in this case the need to believe humans are seen after by a Cosmic Daddy) - all we need ignore is the constellation of evidence that refute it.How to escape from this ontological problem? Short of the pre-recognition (and acceptance) of the entity in the mind of the other - the only alternative for the communicator is to show at least ONE necessary condition and one sufficient condition, for his divine entity.

A sufficient condition is one which, if present, the entity must exist. For example, a sufficient condition for the existence of a hydrogen emission nebula in space would be proximity of the nebula to a radiating star. (The necessary condition is the nebula exist in the first place). In this case, the star's radiation causes the hydrogen atoms in the nebula to become excited - cause electrons to jump to higher energy levels- then go to lower with the emission of photons).

But Lisle gives us nothing! Not ONE single necessary or sufficient condition, which we know in the modern arena constitutes the logic equivalent of providing a minimal standard of proof.

To obtain a genuine idea, one can consult Robert Baum’s textbook, LOGIC, p. 469-70, wherein we see that n-s conditions are practical replacements (in logic) for causes. In other words, instead of saying or asserting x caused y, one stipulates that a, b are necessary conditions for x to exist at all, and c,d are sufficient conditions for y to have been the sole effect of cause x. Baum’s reasoning is clear (ibid.): because “cause” (generic) can be interpreted as proximate or remote, or even as the “goal or aim of an action” and is therefore too open-ended, ambiguous and construed in too many different ways. Thus, “cause” is too embedded in most people’s minds with only one of several meanings, leaving most causality discussions unproductive and confused. If my “cause” and your ‘cause” in a given argument diverge, then we will not get very far.

Because of this one uses the more neutral term “condition” and specifies necessary and sufficient ones. The latter terms are specifically meaningful in the context of determining causal conditions, and hence, causes. If one eschews them, then one concedes he is incapable of logical argument.

If one therefore cannot show the n-s conditions for his God, it is utter nonsense to assert that he knows jack sprat about anything real, and further – quite preposterous to assert also that the laws of logic are “a reflection of the way God thinks” or that we must ‘pattern our thoughts after them”. How can one pattern thoughts after a vacuum? Well, if no necessary or sufficient conditions are provided then that is what one has: an ontological and epistemological VACUUM.

So is Lisle arguing we pattern our thoughts on a vacuum? We can easily see that this is how HE patterns his, since he’s clearly an IDIOT.

More to skewer next time!
Posted by Copernicus at 3:57 PM